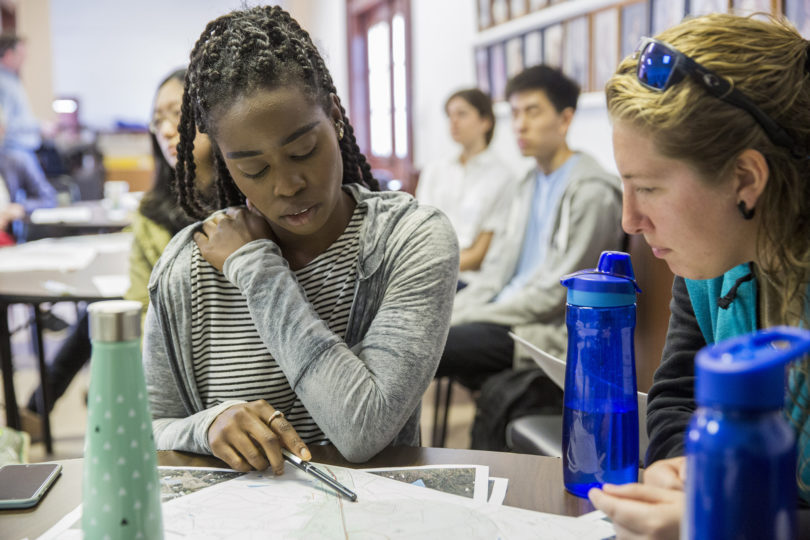 A group of UGA students spent a recent weekend planning new developments in Winterville, a small, rural city in eastern Clarke County, where they worked with the public to identify environmental design problems in the community and find solutions.

The three-day event, called a design charrette, is part of a service-learning course in UGA’s College of Environment and Design, but is open to students from all disciplines.

“We often deal with small towns because they’re the ones that usually don’t have direct access to design help,” said Pratt Cassity, public service and outreach director for the College of Environment and Design.

With a population of about 1,150 people, Winterville residents said they want to preserve its historic, small-town identity but capitalize on an impending increase in traffic that the new Firefly Trail might bring to the city.

The Firefly Trail, part of Georgia’s rails-to-trails project, is a 39-mile trail connecting Athens to Union Point in northeast Georgia, and will run through Winterville, right in front of the Train Depot on Main Street.

During the charrette, students gathered at the Winterville Train Depot to make plans for crosswalks, landmark protection and other developments. Most of their work focused on concerns voiced by citizens, such as pedestrian safety and business growth in the commercial area.

The charrette kicked off with a student-led public input session where citizens discussed their goals for the city, including enhancing the identity of Winterville with community icons and directional signs so visitors realize they are entering the city.

On a tour of the city, Ferrelle pointed out some community “hot spots” such as addressing issues with the Five Points area, making the commercial district cohesive-looking and ensuring it’s known as a historic train town.

The students came up with ideas for bike-sharing programs, fire pits, a new stage for musical performances and a roundabout.

Public feedback is a large part of UGA’s design charrettes. Community members were invited to input sessions every day to see students’ presentations and to offer them background information so they could improve their designs.

“It’s a perfect example of service-learning and experiential learning that students just don’t get the chance to do in their classes because it’s a lot of time commitment,” said Dustin Jones, an undergraduate student studying landscape architecture.

For Erika Schroeder, a graduate student studying historic preservation, the charrette was an opportunity to implement the ideas she has talked about in her classes.

“This is helping me visualize how theory can be brought into practice, and how to work with communities. If we’re designing for people, we need to know how to include them in the whole process,” Schroeder said.

After a final presentation, the plans were put into a report and given to Ferrelle, who hopes to use the report as a guide for the city council’s land-use plan for next year.

“I’m blown away by how intensely they’re working and how public this process is,” Ferrelle said, “There are some things that I’m hoping they bring to us that we can put into place and adopt.”