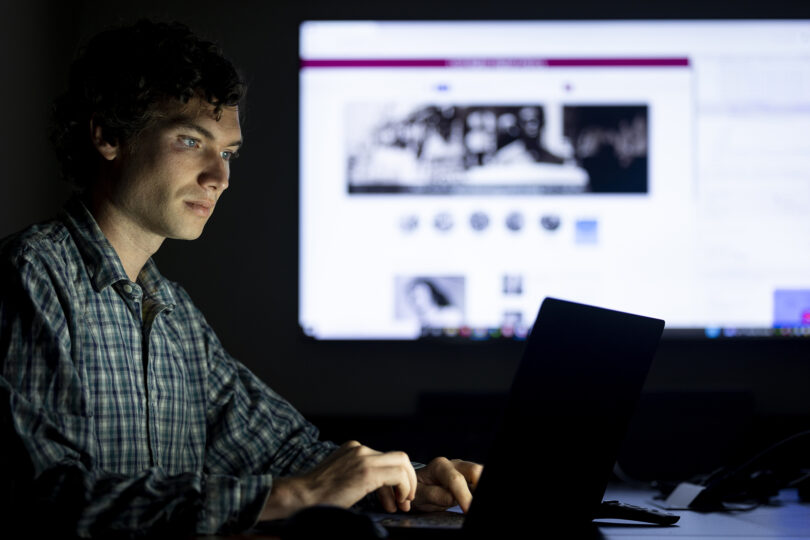 Josh Wier has had his fair share of adventures.

From hiking the Appalachian Trail to biking across the United States, Wier has spent years on the move. In between cross-continental voyages, he worked as a programmer for online collections.

“I had hobbyist experience in [programming] going back to high school. I did little things like something for my dad’s employer, helping them transcribe segments of radio news, which was just a tool for transcriptionists doing it manually,” he said.

For the past year and a half, Wier has been on the programming team for UGA Libraries, working on GALILEO and the Digital Library of Georgia.

Wier studied architecture in college but found himself gravitating toward programming even in the architectural space.

“I always fell back on my programming stuff as my ‘gimmick’ in design school,” said Wier. “I would make something that was computationally designed using some script to repeat a shape.”

He used his programming skills to get a job with the Texas Legislative Council in Austin, which he described as, among other things, the IT department for the Texas legislature. There, he said they maintained a statutes database, kind of like a library collection.

Like his work in Texas, Wier now helps develop the platform that makes library resources available for Georgians. GALILEO holds the university’s database of academic resources, including journals, peer-reviewed articles and books. In addition to the GALILEO portal itself, Wier and the team develop an administrative interface that allows librarians to customize how the site appears to their library’s patrons. The site supports users across the state, including anyone with a PINES card, so the team has to work together to make the site accessible to everyone.

“We have an ‘agile’ team here,” said Wier. “[We try] to get a quick feedback loop going between the stakeholders, the people evaluating the site and the development staff.”

Wier says they are trying to work on something new for GALILEO and the Digital Library of Georgia all the time and just recently released a new version of the Civil Rights Digital Library. The site had a general facelift to modernize the look, but the updates also made it easier to view the materials included in the collection with thumbnails of documents and added context that makes the site more interactive.

Wier is now working on improving the “bento box” interface for GALILEO. The page gives a searcher the top few results from multiple categories, like academic journals or all articles. For example, if someone searched “kittens,” they would be shown the top articles that include kittens, academic journals with articles about kittens, books about kittens or other resources included in UGA’s online library, all presented on one page rather than having to search through each of those categories.

“I think this is more user friendly, especially to the novice user,” said Wier. “And what we’re working on right now is redoing some of the bento view to bring in the tools that are missing for advanced users.”

The new tools are in development and will go through rounds of testing throughout the fall before a 2023 launch. Part of the testing is allowing librarians from around the state to look at the program to see what works best for them and provide feedback from the people that actually use these resources all the time.

Wier says the library community is very collaborative, so it’s good to get input from librarians.

“The library community shares a lot of what they work on so other libraries can take advantage of it,” he said.

These days Wier spends most of his day behind a computer, but that hasn’t slowed down his biking entirely. Along with his girlfriend, he still tries to bike at least 500 miles of new roads per year, adding to the network he created when he biked from North Carolina to Los Angeles, and he has far exceeded that goal in the past two years.

When asked why he likes biking so much, Wier said, “You’re able to take your time and see things, and it’s very important to me to just get a sense of scale and appreciate just physically how far apart things are in this country, and to see the landscape change gradually.”

In Athens, Wier and his girlfriend are still tracking their routes.

“We keep track of every road segment in Athens and which ones we’ve been down, by bike or by foot, and we are coloring in the whole map,” he said.