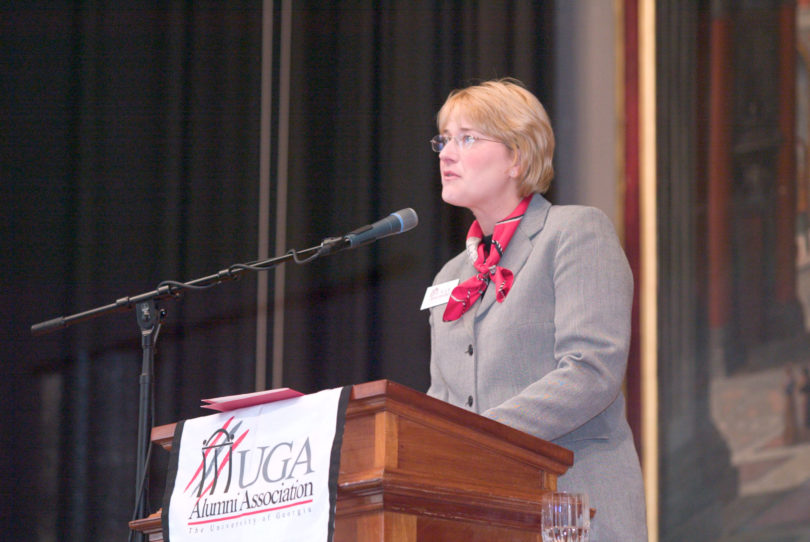 Deborah Dietzler, who has served as interim executive director of the UGA Alumni Association since February, has been named permanently to the position.

Steve W. Wrigley, senior vice president for external affairs, announced this past month that Dietzler was chosen following a national search to find a ­successor to David Muia, who retired Jan. 31 after 16 years as alumni ­director.

Dietzler joined the association in 1997 as associate executive director and chief operating officer. In addition to overseeing the association’s day-to-day operations, she has been instrumental in helping start the Atlanta Alumni Center, creating an award-winning Web site, involving more students in alumni activities and widening the diversity of the alumni base.

She has helped build dues-based membership in the association to more than 20,000, and has started or strengthened other revenue-generating programs that have helped increase the association’s budget to nearly
$2 million.

“Deborah is an innovative leader whose energy and enthusiasm have helped create great excitement and support for the Alumni Association and for UGA,” Wrigley says. “Under her guidance the association will develop even stronger programs and opportunities to engage our alumni. We are fortunate to have someone of her ability, experience and commitment to lead the association and represent the University of Georgia.”

Founded in 1834 as the University of Georgia Alumni Society, the association had an open-ended membership structure until 1997 when it changed its name and became a dues-based organization. Members live in every county in Georgia, in every state in the nation and in many other countries. The university has some 230,000 alumni worldwide.

Dietzler says she will work to nurture the university’s relationship with alumni, who she says “are the best evidence of the value of a UGA education,” and to cultivate more support for the university in tight budget times.

“As the stewards of UGA’s spirit and traditions, we will strive to become an even more integral part of the university as we carry out our mission of celebrating the excellence found in every corner of our campus,” she says.

She serves on UGA’s Enrollment Advisory Committee and the National Scholarship Outreach Conference Committee, and is a mentor in a residence hall for freshmen.

She is currently president of the Junior League of Athens and serves on the board of directors of the Athens Area Chamber of Commerce. She has been chair of the chamber’s Women in Business group and is a nominee for the chamber’s 2005 Athena Award.

She has been recording secretary for Athens Area Habitat for Humanity, and was a board member of the Clarke County Chapter of the American Heart Association and volunteered with Recording for the Blind and Dyslexic.

Dietzler received a bachelor’s degree in English from Hofstra University and a master’s in marketing from Texas A&M University.

William U. Eiland, director of the Georgia Museum of Art, recently announced the appointment of Patricia P. Miller as the new head registrar, of Johnathan McGinty as media relations coordinator and of Sarina Rousso as assistant registrar.

Miller, who has been with the museum since 1998, was initially hired as the assistant registrar for art on campus. In 2000 she was promoted to the position of associate registrar for the museum.

In 1996 Miller received a master’s degree in art history from the University of South Carolina. Since then she has utilized her degree in the fine arts by holding various positions in museums throughout the Southeast, including the Maier Museum of Art at Randolph-Macon Woman’s College, the Stanly County Museum in North Carolina as the director of historic preservation and museums, and the Georgia Museum of Art.

“Tricia Miller brings considerable knowledge and experience in collections and exhibition management. The Georgia Museum of Art will greatly benefit from having her in a lead role as head registrar,” says Annelies Mondi, deputy director of the museum and former head registrar.

As head registrar, Miller will now oversee the preservation of all works, including the museum’s permanent collections and all traveling exhibitions.

McGinty received a bachelor’s degree in telecommunications management from UGA’s Grady College of Journalism and Mass Communication in 2000. In 1998 he joined the staff of the Athens Banner-Herald as a part-time sports reporter and assumed full-time duties upon his graduation.

McGinty’s primary beat was covering high school athletics and professional and collegiate golf. In 2003 he was promoted to assistant news editor where he assumed responsibilities related to the day-to-day planning and editing of the newspaper.

As media relations coordinator, McGinty will be responsible for the marketing and promotions of the ­museum.

Rousso earned a bachelor’s degree in painting and drawing from UGA in 1985 and participated in postgraduate work in graphic design. Upon finishing her studies, she worked as an artist for the communications department of the Cooperative Extension Service at UGA for eight years. Since leaving the Cooperative Extension Service, Rousso has held positions in the graphic arts profession in Athens. She has held exhibitions of her original works in Athens and Augusta.

As assistant registrar, Rousso will oversee the Lamar Dodd ­Sketchbook Project and assist in managing the museum’s exhibitions and new ­acquisitions.