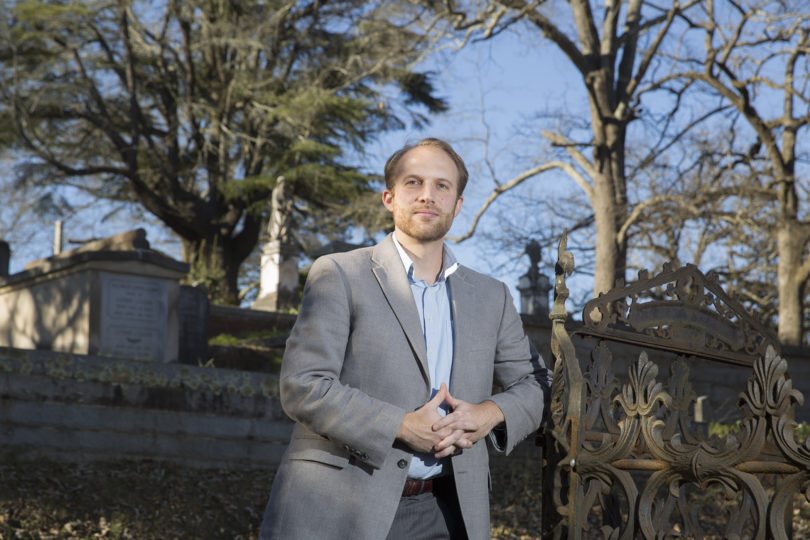 For Scott Nesbit, the digital humanities ask the same questions as conventional liberal arts pedagogy, but with the added dimension of computers.

“We use computers to ask the hard questions—like what does it mean to be a person?—and let them help us as we think,” said Nesbit, an assistant professor in the College of Environment and Design. In his case, Nesbit uses computers to tell a richer narrative about history in the American South.

Nesbit sees computers as tools that can create highly visual academic work, accessible even to audiences without access to academic journals. That visual interpretation has been particularly useful in Nesbit’s field of historic preservation.

“To my mind, historic preservation has the mission of getting us to reckon with the past that’s all around us,” Nesbit said. “This requires responsible and ethical work that helps us find the narratives of where and how we live. By preserving sites with particular meaning, we preserve the story.”

Using GIS, creating data sets and writing programs, Nesbit’s students think about data as evidence of these stories and start to see patterns emerge in human decisions and actions.

“While we sometimes take comfort in history as the study of facts of the past, the more information we have at our fingertips often leads to new interpretations and deeper understanding, which can be daunting,” Nesbit said. “What we thought was ‘true’ might be just the tip of the iceberg. So being able to graphically represent runaway slave patterns helps us grapple with the intricacies/nuances of the past, which, as Mr. (William) Faulkner pointed out, and our current societal upheavals reveal, is never really past.”

Nesbit’s recent work has focused on American slavery during the Civil War era. He is working on a book that “maps” where, when and how the institution of slavery fell apart.

Using an array of textual sources—from military correspondence to runaway slave advertisements found in Southern newspapers—he has tracked radical changes in the lives of African-Americans as the war unfolded.

In Nesbit’s recent class on Reconstruction, students compiled information about the whereabouts of escaped slaves based on ads placed in Georgia newspapers. Information such as skills, age and gender gleaned from the ads were added allowing students to “see” the details of slavery unfold visually.

“In the digital humanities, we make lots of lists,” Nesbit said. “We look for patterns, trends and anomalies that might tell us something that isn’t visible in conventional primary resources.”

This appreciation for ordered lists began with Nesbit’s study of Latin and Greek at Swarthmore College in Pennsylvania. After getting his undergraduate degree, he studied architecture at the University of Virginia in Charlottesville where he grew up and was fascinated by the use of space and urban design. His study segued into a doctorate in American history.

Nesbit’s courses allow him to explore with undergraduate and graduate students the history of Athens and the South using methods that he (and his students) have found compelling.

“I want students to be able to get at the big questions of how the world works, what we’ve created and how to make sense of things,” Nesbit said.

“I want them to explore what it means to be a human being and how we make meaning.”