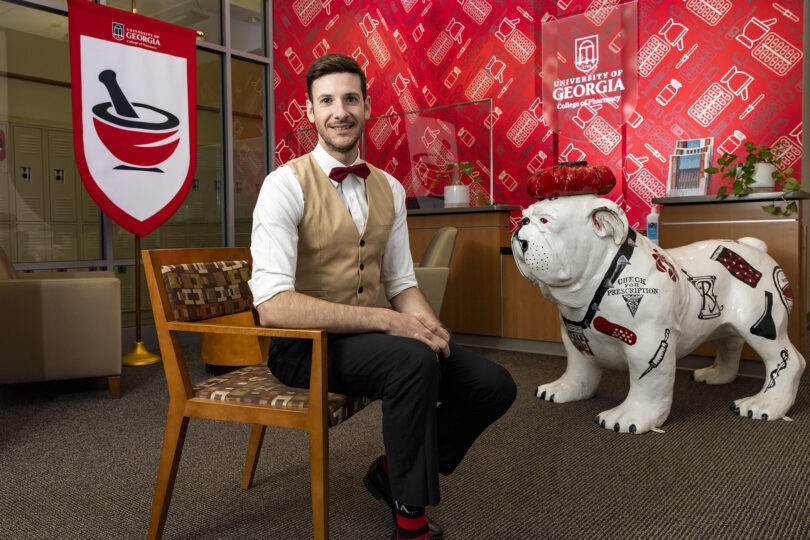 Shane Pruitt is the director of recruiting and undergraduate advising in the College of Pharmacy. (Photo by Dorothy Kozlowski/UGA)

Shane Pruitt shares his talents with the UGA, Athens communities

Shane Pruitt could be considered a modern-day Renaissance man.

He knows how to fly a plane. He commands the stage with a song or a soliloquy. And, as the director of recruiting and undergraduate advising in the College of Pharmacy, he guides hundreds of students through their educational journey.

“I have the opportunity to help students find their fit, even starting in middle school,” he said. “Everyone comes in with a different journey. An education in our college is tailored to that student and what they want to offer their community. We figure out how to make that happen.”

Pruitt’s own journey began in a rural area of southeastern Oklahoma on a chicken farm. He went on to earn his bachelor’s degree in microbiology/pre-pharmacy from the University of Oklahoma and made a concerted effort during his first year to be involved and explore his new world.

“My first year of college was probably the most transformative of my life,” he said. “Why not help others have that same transformational opportunity? College can be a buffet where you get to experience all of the things laid out for you. Then, you can go back to that dish that you really love.”

During his time as an undergraduate, Pruitt found he had a penchant for leadership through his involvement in his fraternity, student life and residence life. That passion led him to pivot from thoughts of going to pharmacy school to getting a master’s degree in higher education administration from the University of Oklahoma and a doctorate in adult and higher education administration from the University of Memphis.

Pruitt worked as a recruiter throughout graduate school and then went on to work in both alumni relations and campus life at Oglethorpe University in Atlanta. He later accepted a position with Gallup in educational consulting and worked there for several years. Eventually, Pruitt decided he would like to be back on a college campus and back in Georgia. His position at UGA’s College of Pharmacy proved to be the perfect blend of his love for life sciences and his passion for working with students.

“Helping students find their purpose has always been the golden thread that has run through my career,” he said. “More and more, I believe we must think of higher education as something that should involve a bigger community. Everyone needs to pitch in, because education is the right of all.”

Pruitt is working to build that community through his recruiting efforts and programs. For example, this summer he helped lead a health care careers camp for middle school students. It’s a partnership with Albany State University that allows participants to get a better understanding of all of the allied health opportunities available through experiences like shadowing at Phoebe Putney Memorial Hospital.

“As a recruiter, I get to go into all of these different spaces and help them understand what being a health care provider is and how their strengths could fit into that type of role while realizing that maybe pharmacy could be one of the ways they make a difference in their community,” he said.

Pruitt is on the road quite a bit, but he continues to make sure those students feel supported by advising about 200 undergraduate students.

Outside of UGA, theater remains an important creative outlet for Pruitt. It’s something he’s been involved with since his time in college, and he was recently cast as a lead in an upcoming Town & Gown musical production. Pruitt also hopes to direct some shows and serves on the executive team of the Classic City Shakespeare Company, a nonprofit he formed with other Athens artists focused on presenting the works of Shakespeare and other classical material. Eventually, he would like to build opportunities for local youth to get training in classic theatrical and vocal areas and is working on projects like summer camps teaching Gilbert and Sullivan operettas and an adult troupe to perform shorter Shakespeare material in places like local libraries.

Additionally, Pruitt has his private pilot’s license and flies when he can. He also enjoys playing basketball and sings in his church’s choir.

Although all of those activities fulfill Pruitt in many ways, he perhaps gets the most satisfaction out of helping his students find their way.

“Every student has it within them to succeed. You’ve just got to find a way to support individual students so they can activate that success,” he said.