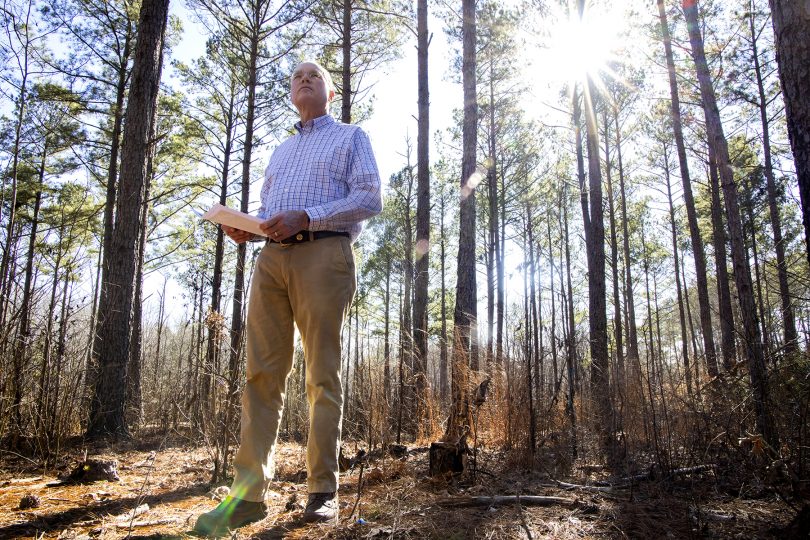 Mike Hunter is the lands and facilities director at the Warnell School of Forestry and Natural Resources. (Photo by Dorothy Kozlowski/UGA)

Mike Hunter manages lands and facilities for the Warnell School

Mike Hunter just wants to be outside.

As a forester registered in the state of Georgia, his love for the outdoors led him down a path to become the lands and facilities director at the Warnell School of Forestry and Natural Resources.

“That’s the reason I went into the forestry and natural resource field,” Hunter said.

From student to employee

Hunter grew up in Wilkes County, Georgia, and for the first 10 years he worked as a UGA employee, he commuted back and forth from Rayle, Georgia. Now, Hunter is approaching year 26 of working at UGA.

After graduating, Hunter began working in his hometown of Washington, Georgia. But just a few years later, in fall 1995, he was back at UGA and has been at the university since then.

“It’s everything from timber sales and harvests to prescribed burning, reforestation and site preparation on those properties,” Hunter said. “Some of that’s hands-on with us, and then for others, we handle contractors to perform some of those tasks.”

He said the facilities side of his job is similar. Hunter and his team do maintenance and updates, often concerning labs, to meet specific researchers’ needs. They also work with the Facilities Management Division and outside contractors to accomplish tasks.

“When I came back to UGA, the job involved managing some facilities, and fortunately, I had a little bit of background in that. My granddad built houses for many, many years,” Hunter said. “As far as handling the facilities that Warnell has, I’m kind of the conduit for getting work done on those.”

Hunter’s office is in the historical Whitehall House, a red brick mansion that dates back to 1892.

The mansion was restored in 1977. After the restoration, the upper floors were used for caretakers’ quarters, while the rooms on the main floor were used for receptions. Meetings were often held in the basement.

“It’s pretty neat. Believe it or not, I lived there for a period of time,” Hunter said. “While we got some interior upgrades and some exterior updates, the house—for the most part—is as it was then.”

Progress since the ’80s

Hunter said he’s seen the Warnell School change pretty drastically since the ’80s, and these changes extend beyond the school’s name change in the ’90s.

Gender diversity in particular is one of the most significant changes Hunter has seen firsthand during these past decades at Warnell.

For example, there are more women faculty members at Warnell today, he said.

“It’s been quite a big change. There is a lot more diversity today,” Hunter said. “I don’t know the exact number, but there weren’t a whole lot of females in our school when I graduated in ’87, and today, the school is probably about 50% or better female.”

As one can expect, the types of technology Hunter and others used as forestry students in the 1980s has transformed, too.

Navigation changed forever with the creation of the global positioning system—a network of satellites more commonly known as GPS—in the early ’90s.

“Of course, the tools and instruments that are available for us to work with and do our job today is a lot different,” Hunter said. “We were still doing hand-drawn maps back in the day, and today, we have all the GIS, GPS systems.”

The role itself, however, hasn’t changed as much. It’s still pretty similar to when Hunter began in the late ’90s—a diverse role with lots of versatility and responsibilities.

“I myself like diversity,” Hunter said. “I get pretty bored doing the same thing every day, and I can say that my job is pretty diverse.”

In fact, that’s Hunter’s favorite part of the job.

“That’s probably the thing I enjoy most: It’s never boring. It’s not monotonous,” he said. “Of course, I do have the advantage of being outside frequently, so that’s always a big plus, too … not being confined to an office.”

But the most rewarding part isn’t the versatility or even the setting of the role, which is perfect for Hunter, who prefers the outdoors.

It’s the effect of Hunter’s work on students and faculty that makes it all worth it.

“Most of the time, what we do has a direct impact on others, so I find it very rewarding to see our work allow other people be successful, whether it be research, a teaching opportunity or an outreach opportunity,” he said.

Even with the COVID-19 pandemic, Hunter’s role has remained wholly the same. It certainly helps that his job requires him to be outside often.

“The pandemic really didn’t have an effect on our workload that much. It actually created some opportunities to get things done while there were limited people on campus,” he said.

Eventually, Hunter said he wants to finish at Warnell, concluding his working career at UGA.

“I was fortunate enough to get this job … and be here for the last 20 years in this job,” Hunter said. “I’m open also to what the future might hold as far as opportunities and challenges for me.”

When Hunter isn’t working outside as the lands and facilities director, he enjoys the outdoors on his own time.

“I like spending time with my family, and I have a few cows,” he said. “We enjoy spending time on the lake, and probably like a lot of forestry and natural resources folks, I like to hunt and fish.”