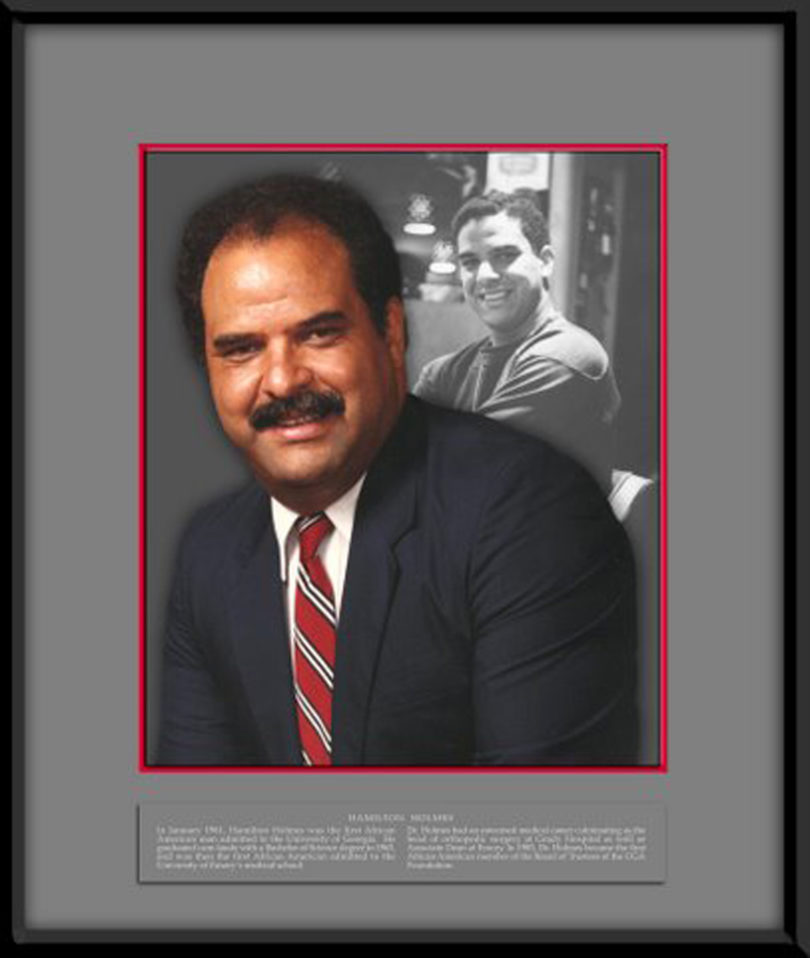 Portrait unveiling to kick off celebration

The University of Georgia will kick off a weeklong celebration of diversity on Sept. 17 with a portrait unveiling of its first African-American alumni.

Formal portraits of Charlayne Hunter-Gault, Mary Frances Early and the late Hamilton Holmes will be formally unveiled at their new home in the Holmes-Hunter Academic Building.

The portraits will be done in a “then and now” style, with a color modern portrait in the foreground and a black-and-white photograph from the 1960s in the background. A small portion of text under the portrait will explain to visitors the significance of Holmes, Hunter-Gault and Early to the university.

“When you walk in this building, you should know why the building is named Holmes-Hunter,” said Cheryl Dozier, associate provost for institutional diversity. “They’ve made such a significant impact on UGA, taking the risk they did.”

In 2001, the Academic Building was renamed for Holmes and Hunter-Gault on the 40th anniversary of the desegregation of the university. Dozier said that many people do not realize the significance of the building’s name.

The portrait project has been in the works since last fall when Joan Pittman, assistant director for institutional diversity, suggested the Holmes-Hunter Building house portraits of its namesakes and Early.

Dozier said it was part of a personal project to put art on the walls of the building, that  houses the Office of Institutional Diversity. It’s also part of a much larger effort to create a celebration of diversity that extends beyond one department to all of campus.

As the inaugural observance of Diversity Days gets under way, Dozier is hoping to establish it as an annual or biannual event.

Purposely set one month after classes begin, Dozier said it’s a good time to evaluate whether new faculty, students and staff feel welcome and have been embraced by the university community.  The theme for the celebration is “Embracing Diversity at UGA.” During the week, there will be balloons displaying the theme all over campus.

On Sept. 17, a 50-minute presentation at 2 p.m. in the Chapel will precede the formal unveiling of portraits at the Holmes-Hunter Academic Building followed by refreshments on the lawn. Early and members of the Holmes and Hunter-Gault families will be present for the unveiling.

During this week, other university units will host diversity-related events. On Sept. 18, the College of Education’s Dean’s Council on Diversity will hold a resource swap and refreshment bash on the lawn of Aderhold Hall from 3–5 p.m. At 4 p.m. that day, the Willson Center for Humanities and Arts is sponsoring a lecture by Han Park, University Professor of political science and director of the Center for the Study of Global Issues. The title of Park’s lecture, to be held in Room 148 of the Student Learning Center, is entitled “Lessons from the Iraq War: Beyond Victory or Defeat.”

On Sept. 20, the department of theatre and film studies will perform Sordid Lives, a comedy by Del Shores, in the Cellar Theatre of the Fine Arts Building at
8 p.m. Tickets are $15 ($12 for students), and the show runs through Sept. 30.

Campus Coffee Hour celebrates diversity every Friday, and on Sept. 21, the Vietnamese Student Association will host the weekly cultural presentation and samplings of international foods from 11:30 a.m. until 1:30 p.m. in the Memorial Hall Ballroom.

Diversity Days concludes with the 2007 Peach State LSAMP Second Annual Research Conference Sept. 21–22 at the Tate Student Center. Sponsored by the Office of Institutional Diversity and the Peach State Louis Stokes Alliance for Minority Participation, this year’s meeting will feature sessions for professional development and enhancement as well as student research in concurrent oral and poster presentations.

Under the theme “Building Bridges for Careers and Opportunities in STEM,” the conference will give participants from USG institutions and institutions from around the country an opportunity to network with fellow scholars and faculty, as well as graduate and professional school representatives. An exhibitor fair will recruit student participants for opportunities in science, technology, engineering and mathematics.