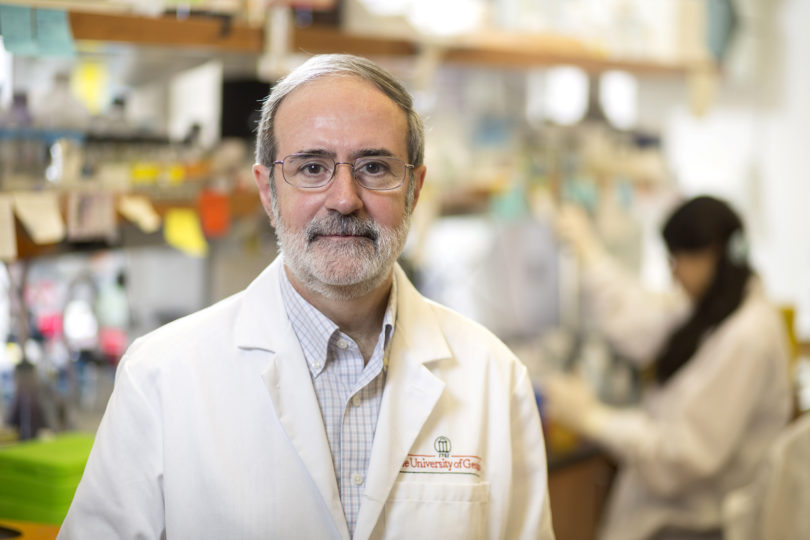 The award, which is administered by provosts at the 14 universities in the SEC, recognizes professors with outstanding records in teaching and scholarship who serve as role models for students and other faculty members. Winners receive a $5,000 honorarium.

Docampo, a faculty member in the Franklin College of Arts and Sciences and a member of the Center for Tropical and Emerging Global Diseases, is a world-renowned researcher known for his work on neglected parasitic diseases including malaria, Chagas disease and sleeping sickness. He also is credited with the discovery of a novel organelle, the acidocalcisome, conserved from bacteria to human platelets, where it has a role in blood coagulation. His most recent work at UGA includes the successful use of the CRISPR/Cas9 technique to edit the genome of Trypanosoma cruzi, the parasite that causes Chagas disease. He also has characterized a key signaling pathway in the parasite, which could allow for advances in drugs or vaccines to treat or prevent parasitic diseases.

“Dr. Docampo is advancing research with implications for millions of people around the world while also educating and mentoring students who themselves will go on to improve global health,” said Senior Vice President for Academic Affairs and Provost Pamela Whitten. “His work exemplifies the vital role this institution plays in creating healthier communities in Georgia and beyond.”

Docampo, who has written more than 300 peer-reviewed articles and chapters in top scientific journals, currently acts as the principal investigator on four grants from the National Institutes of Health totaling more than $7.2 million, and Brazilian grants fund a second laboratory in Campinas, Sao Paulo. In total, his research has garnered more than $20 million from organizations such as the NIH, World Health Organization, American Health Association, Georgia Research Alliance and GlaxoSmithKline.

Docampo has received numerous teaching and mentoring awards, and he is a Fellow of the American Academy of Microbiology and of the American Association for the Advancement of Science. He currently serves as the editor-in-chief of the Journal of Eukaryotic Microbiology, as well as on the editorial boards of four additional journals. In addition to the medical degree and two doctoral degrees he earned from the University of Buenos Aires and Federal University of Rio de Janeiro, Docampo was awarded an honorary doctorate degree from the National University of San Martin in Argentina in 2013.