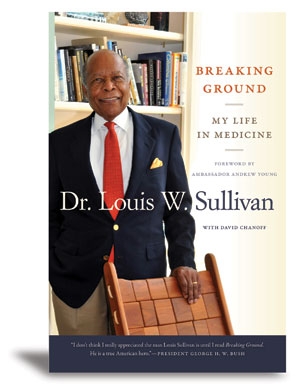 In Breaking Ground: My Life in Medicine, Dr. Louis W. Sullivan recounts his life beginning in Jim Crow South Georgia and continuing through his training to become a physician in an almost entirely white environment, founding and then leading the Morehouse School of Medicine in Atlanta, and serving as secretary of Health and Human Services in President George H. W. Bush’s administration.

Sullivan went to medical school at Boston University as the sole African-American student in his class. He eventually became the chief of hematology there until Hugh Gloster, the president of Morehouse College, presented him with an opportunity to be the founding dean of Morehouse’s new medical school. Sullivan went on to create an institution dedicated to helping poor and minority students become doctors. During this period he established relationships with George H. W. and Barbara Bush that would result in his becoming the secretary of health and human services in 1989.