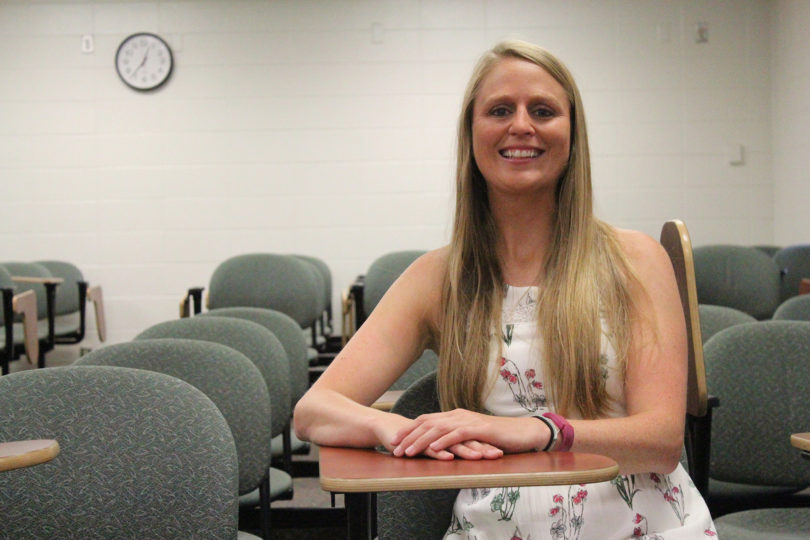 Kalianne Neumann is using the data she collects from Revision Assistant for her doctoral dissertation.

Sometimes, it’s so easy to get caught up in the details that you miss the bigger picture.

That’s what was happening to Kalianne Neumann’s middle schoolers, who were eagerly using Google’s tools to share and critique their class writings.

But rather than offer comments on sentence structure or paragraph organization, the students were getting bogged down in the little things, like capitalization and punctuation.

“At the time, Google Documents only had the commenting feature, so some of the kids had 60 to 70 comments from their peers that said, ‘You need to capitalize this,’ ” said Neumann, a doctoral candidate in the learning, design and technology program in the University of Georgia College of Education. “There was some good advice and feedback about the content, organization and purpose, but for some of the kids, it got lost.”

So she invented a way to fix that.

Meet Revision Assistant, an add-on for Google Documents. While it recalls some features similar to Microsoft Word’s “track changes” feature, which highlights changes in a document, Revision Assistant goes one step further, incorporating a Google document-friendly version of proofreading marks and space for separate comments to note more complex issues with the text.

Added to Google in the fall of 2015, it now has more than 33,000 users and is set for a second update that incorporates feedback from teachers and students across the country.

“I’m really excited about it,” said Neumann, who is using the data she collects from Revision Assistant for her doctoral dissertation. Her hope is that students who see the proofreading marks for small errors will learn to make these quick fixes in subsequent essays. This, in turn, will give them more space to consider the overall piece.

“I’m looking to see if the students internalize the common errors they make so they can focus on making revisions instead of fixing errors,” she said.

Her professor and advisor, T.J. Kopcha, said the origins of Revision Assistant directly relate to the goals of the learning, design and technology program: To find a solution within design. For example, Revision Assistant features two drop-down panels that hold pre-set editing marks. (An updated version, planned for a release this fall, includes three.) “The two levels are conventions, such as spelling and punctuation and structure,” he said. “Then we got teachers using it with students, and we realized they don’t think in just those two levels. The new version still has that surface level, and then there’s the way something is used and the way a sentence is formed. Those are two deeper-level categories.”

From idea to Google tool

Kopcha added that Google Classroom is a new trend in school districts, offering teachers options such as the ability to distribute a document to 30 students at once. If the exercise is to provide written feedback through comments, the teacher can then export the students’ comments into a table at the end of the document and see what they were thinking as they went through the text.

The other plus to Google’s tools is that they are user-friendly. While many teachers are tech-savvy, not all know computer code. Neumann admits she falls into that category. Even so, when she started the College of Education program, she had a clear idea of what she wanted Revision Assistant to look like, even without experience in coding and little idea how to turn something into an add-on for a Google document.

“I had a Google hangout with Promevo in the summer of 2016, and I said, ‘How much is this going to cost?’ ” she said, doing the math in her head to calculate her assistantships and what she might be able to afford. “They said, ‘Oh no, we’re going to do this pro bono.’ ”

Three weeks later she reviewed a demo of Revision Assistant, and by September it was available through Google.

Granted, despite the technology learning curve, this wasn’t the first time Neumann created a technology-based tool to make lives easier. Before she got into the doctoral program, Neumann designed an insulin calculator app inspired by the charts her mother made for her brother, who is diabetic.

“So I had that motivation and inspiration to get me through this, and it really pushed me to do it,” she said.

Since Revision Assistant came to life, Neumann also has learned some code on her own, and she has used the framework Promevo built to add the third level of proofreading marks suggested by users. She hopes the new version will be available later this year. In the meantime, she’s always open to feedback.

“Teachers will tell me different ways they are using it,” she added. “I want it to be useful to teachers and students, and I want to keep getting that positive reinforcement so I can make it even better.”