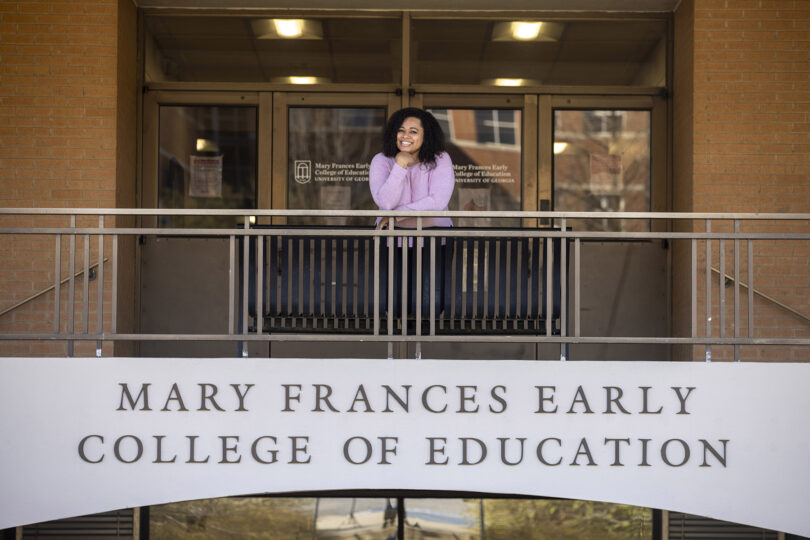 Ashley Love is a doctoral candidate in the department of educational theory and practice in the Mary Frances Early College of Education and one of five recipients of the 2021 President’s Fulfilling the Dream Award. (Dorothy Kozlowski/UGA)

When Ashley Love was a young girl, her mother introduced her to Coretta Scott King.

Love and her mother were friends of the Rev. Dr. Martin Luther King Jr.’s cousin. For Love, meeting such a renowned activist and civil rights leader was life changing.

Coretta Scott King continued the work that she and her husband began as a dedicated activist and advocate for equality until her death in 2006.

“I was able to stand in that space and meet her, and it was just a remarkable experience and a teachable moment,” she said. “I’ll never forget that my mom wanted that opportunity and sought it out for me. She’s guided much of who I am.”

Love credits trailblazers like the Kings and Mary Frances Early, the first African American to graduate from UGA, for inspiring her to continue fulfilling the dream.

Love, a doctoral candidate in the department of educational theory and practice in the Mary Frances Early College of Education, was one of five recipients of the 2021 President’s Fulfilling the Dream Award, which acknowledges students, faculty, staff and Athens community members who honor the legacy of King. The awards are given annually during the Freedom Breakfast, held virtually this year on Jan. 15.

She’s also served as a member, committee chair, president and vice president of GAPS, a UGA organization for graduate and professional scholars. She was also the project manager for the 2020 Mary Frances Early Lecture and Luncheon.

Love grew up in Columbus, Ohio, but moved to Athens, Ohio, to earn her master’s from Ohio University. After that, she made a quick transition and moved to Athens, Georgia, so she could earn her doctorate from UGA.

Black trailblazers—particularly Early—have inspired Love to carry on King’s legacy through leadership both at UGA and in Athens.

Love said getting to know Early through GAPS has been a wonderful experience.

“She’s always pleasant and always wants to be involved in the lectures,” she said. “She’s just really open, friendly, excited, and she’s very humble, even though the lecture is in its 21st year. She’s just so grateful that we choose to honor her and keep her legacy and history at the University of Georgia going.”

Early has inspired and will continue to inspire her, Love said. She’s grateful for all the dedicated worked Early has done, not only for GAPS but for the university as a whole.

“There’s this sowing of the seeds that she did, and something beautiful is on the horizon. For her, we are the horizon. And to us, she’s the horizon, because we come back full circle to her every year,” Love said.

Love’s own unwavering leadership and dedication to UGA these past few years has been a “rewarding experience,” she said.

“For everyday people, diversity is not something they really think about or know, but for students of color on campus, we notice it,” she said.

Love also noted how much she has enjoyed working with senior administration at UGA to create opportunities for underrepresented students to thrive at UGA.

“I’m grateful for President Morehead and Drs. Cook, Daniels and Walcott, who have supported GAPS and the work of recruiting and retaining diverse students at all levels to further enrich the UGA community,” she said.

These aforementioned leaders—the Kings and Early—helped Love to realize that she’s not as disconnected from the past as she previously thought.

Love said she’s thankful for all of Early’s contributions to UGA and beyond. Without Early, there would be no GAPS, she said.

If she could dedicate her award to anyone, Love said she’d use it to honor her mother and her daughter, Chloe.