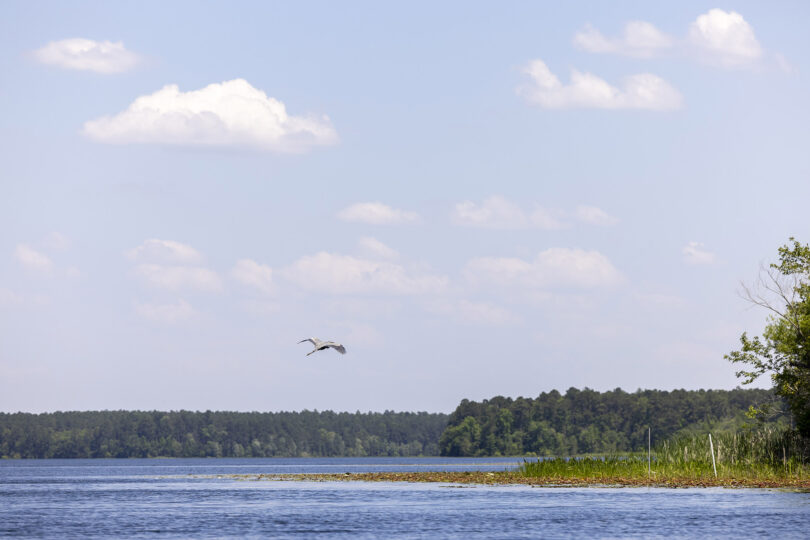 A heron flies over a lake at the Savannah River Ecology Laboratory (SREL). (Photo by Dorothy Kozlowski/UGA)

The U.S. Department of Energy has renewed its cooperative agreement with the University of Georgia’s Savannah River Ecology Laboratory for an additional five years at a projected total contract value of $34 million. SREL serves as a scientific partner and independent evaluator of environmental consequences of DOE activities on the Savannah River Site.

SREL is celebrating its 70th anniversary this year as DOE’s onsite partner at SRS, and SREL scientists have been actively engaged in research on the SRS over those decades.

According to Director Olin E. Rhodes Jr., the depth and scope of SREL’s activities have increased steadily in recent years and are reflected by a significant growth in SREL’s graduate student population and a greater volume of high-impact scientific publications and competitive external funding awards.

“SREL represents an invaluable source of scientific expertise to the DOE in understanding the complex relationships between legacy contaminants on the SRS and the sustainability of the ecosystems and wildlife on the site,” Rhodes said. “Over the past five years, we’ve increased the numbers of scientific publications produced by more than 30%, and the number of trained graduates has increased by more than 80%, highlighting the enormous value that SREL brings to both DOE missions on the SRS and to the members of the general public who live in communities surrounding the site.”

BSRA is a consortium led by Battelle, a global research and development organization that manages eight other U.S. national labs. In addition to UGA, the consortium includes Clemson University, University of South Carolina, South Carolina State University and Georgia Tech.

In a December 2020 announcement, DOE selected BSRA to manage SRNL for the next five years, with one-year options for five more and at an estimated total contract value of $3.8 billion. As the DOE’s Environmental Management Laboratory, SRNL provides strategic scientific and technological support for the nation’s $6 billion per year waste cleanup program.

With its long history of research on the site, SREL will serve as a centerpiece of UGA’s presence at SRS and will play a significant facilitating role for UGA research and education efforts in support of new collaborations with SRNL.

“SREL has been a consistently valuable partner over the past 70 years, and the return on investment to DOE and the nation has been exceptional,” said Mike Budney, DOE Savannah River operations manager. “We are excited about the renewal of SREL’s cooperative agreement with the department and look forward to assisting SREL’s leadership in facilitating university involvement with the SRNL as it seeks to grow its research and education programs over the coming years.”

In addition to its research activities, SREL conducts a number of educational and outreach programs, many of which inform SRS-area residents of the activities on the former nuclear site and the environmental impacts of those activities.

As the new agreement with DOE is signed, SREL is preparing to grow the scope of its research and education programs, adding five tenure-track positions to its research and teaching faculty while also expanding its graduate training programs—particularly those focusing on underrepresented groups in the environmental sciences.

“The Savannah River Ecology Lab is a significant and exciting part of UGA’s research portfolio,” said Karen Burg, vice president for research. “The ecological research that has been conducted at the site over the last 70 years, together with the opportunities SREL represents as we enter into this management partnership for the Savannah River National Lab, make SREL a vital and strategic asset for a variety of UGA disciplinary strengths.”