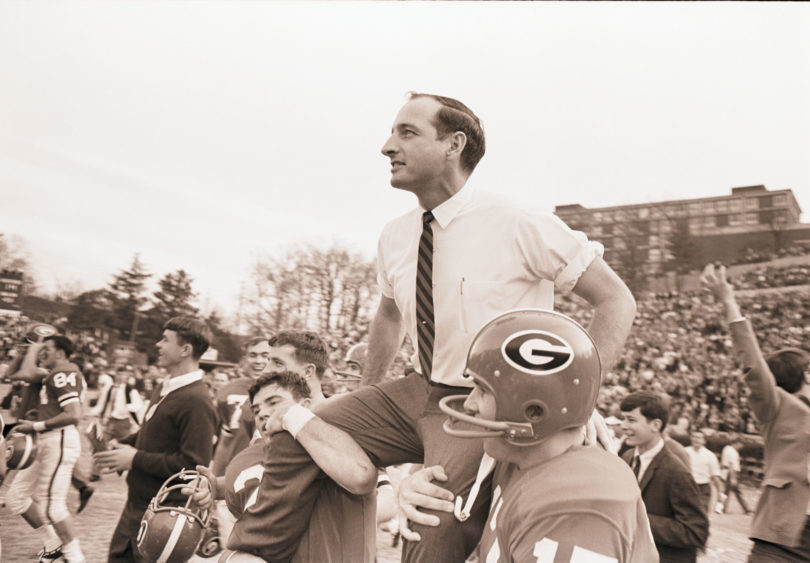 Coach Vince Dooley is hoisted by team members after the 1966 victory over rival Georgia Tech. A statue honoring Dooley and his contributions to UGA athletics will be unveiled before the Nov. 29 football game against Georgia Tech.

The university will dedicate the Vince Dooley Athletic Complex on Nov. 29 at 9:30 a.m., before UGA’s football game with Georgia Tech. The ceremony will be held in the Butts-Mehre Heritage Hall and will be followed by a ribbon cutting for the complex and an unveiling of a statue depicting a victorious Dooley being hoisted on the shoulders of players from his 1980 national championship team.

The dedication ceremony program will include remarks by Gov. Sonny Perdue, U.S. Sen. Johnny Isakson, UGA President Michael F. Adams and Billy Payne, chairman of the Augusta National Golf Club and the Masters Tournament, and a former football player under Dooley who served as chairman and CEO of the Atlanta Committee for the Olympic Games. Other program participants include Damon Evans, director of athletics; Jack Bauerle, swim coach; Heather Stepp McCormick, former gymnast; and Maria Taylor and Michael Green, the two student-athlete representatives to the Athletic Association board.

A garden and sculpture commemorating Dooley has been constructed at the corner of Pinecrest Drive and Lumpkin Street, adjacent to Butts-Mehre Heritage Hall.

The Athletic Association funded the costs related to the garden, and a group of donors provided funding for the sculpture, which was created by Athens sculptor Stan Mullins.

Earlier this year, UGA proposed naming the sports complex on the southwestern end of campus for Vincent J. Dooley, football coach from 1963 to 1988 and director of athletics from 1979 to 2004.

The board of the Athletic Association and the Cabinet approved the naming and Adams formally recommended the naming action to the University System of Georgia Board of Regents, which gave approval at its meeting last February.

Dooley’s football teams won 201 games and six Southeastern Conference titles during his 25-year tenure, along with a national championship. Dooley won a national Coach of the Year honor in 1980. The Bulldogs won a total of 23 national championships and 78 SEC crowns during Dooley’s time as director of athletics, which also featured more than 100 UGA student-athletes being named first-team Academic All-Americans; more than 50 receiving postgraduate scholarships from the NCAA; seven winning Boyd McWhorter Scholar-Athlete of the Year awards; seven were named recipients of the NCAA Today’s Top Eight award; three being named NCAA National Woman of the Year, and two winning the Walter Byers Award from the NCAA. In addition, UGA student-athletes earned 89 berths in Olympic Games competition from 1980-2004. Dooley has been inducted into numerous halls of fame including the College Football Hall of Fame and State of Georgia Sports Hall of Fame.