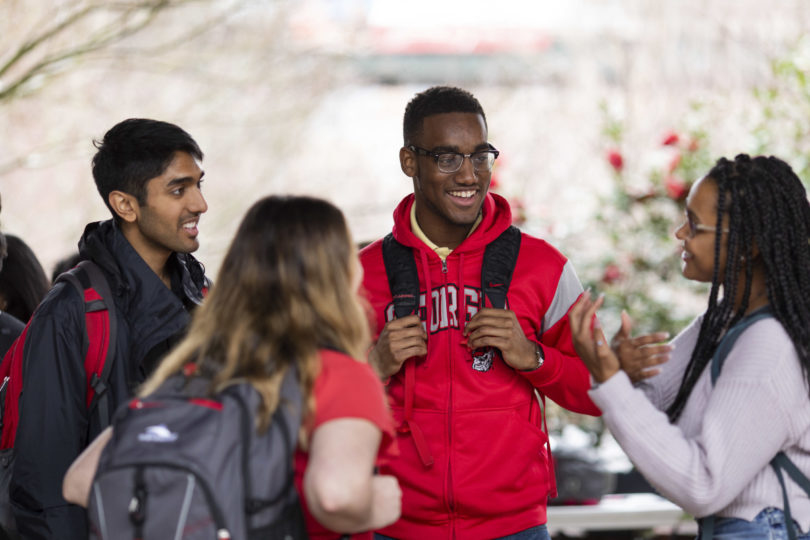 Caleb Kelly, center, is especially proud of his work as an orientation leader and discovery counselor for Dawg Camp Extended Orientation. (Photo by Andrew Davis Tucker/UGA)

Caleb Kelly grew up as a member of his church’s first family. In his words, it wasn’t a bad gig. He was showered with love from the congregation and learned how to work a room.

Regardless, he got a kick out the role reversal at the 2020 Martin Luther King Jr. Freedom Breakfast. Kelly, a third-year sport management student in the College of Education, was one of five recipients of the President’s Fulfilling the Dream Award, which recognizes those who honor King’s legacy.

As Kelly was introducing his parents to his mentors and peers, he realized that, at least on campus, he’s not just “Pastor Kelly’s son.”

Kelly has made a name for himself at UGA, mostly through his involvement with an array of leadership organizations. As a freshman, he took part in the Black Male Leadership Society and the Accidentals, an a capella group on campus.

Going into his second year, he developed his passion for minority recruitment by serving with the Georgia African American Male Experience. Having been recruited by GAAME himself, he was interested in sharing his experiences with the black community.

“It was life changing as far as how much purpose I felt,’’ said Kelly. “I enjoy building relationships and making someone else smile. I loved making those guys feel good about themselves, and I realized that I didn’t just want to use that in GAAME. I wanted to do that for all people.”

This awareness led him to pursue opportunities with more diverse communities. Out of all the organizations he has been a part of, he’s especially proud of his time as a 2019 summer orientation leader and discovery counselor for Dawg Camp Extended Orientation for incoming UGA freshmen.

“The whole summer, I just woke up thinking about how I could make someone’s day better and how I could give to someone else,” Kelly said. “It was the hardest job I’ve ever done—but also the most rewarding thing I’ve ever done—and it’s something that will affect me for the rest of my life.”

To be sure, these positions didn’t come without their challenges.

“There are a lot of tough conversations to be had as an orientation leader,” Kelly said. “Being a black man talking to a room full of white people about diversity and equality [was difficult]. It was about teaching them that privilege can be a good thing if you acknowledge it and use it to help someone else.”

Orientation wasn’t his first time working with a division of the university. Kelly also has served as an ambassador for the College of Education and in two different roles for University Housing. Currently, he’s training to be a tour guide for the UGA Visitors Center. He’s excited to showcase the university and share his story.

“My boss has us watching TED Talks,” said Kelly. “He’s training us to be good people and good leaders. Only 20% of the people who tour end up enrolling at UGA. What we want to do is give them an honest, genuine experience and share information that’s valuable to them in the long term.”

Kelly understands the weight of a single interaction and said that he wants everyone who interacts with him, whether on a tour or in passing, to feel welcome and appreciated. He credits this behavior to King’s teachings and is inspired to treat people with kindness.

Kelly said that if he could talk with King over dinner, he would ask the civil rights leader for advice.

As for what’s in store for Kelly, he’s not sure. Regardless of where he ends up, he knows that he will continue working with people, living King’s mission and inspiring people.