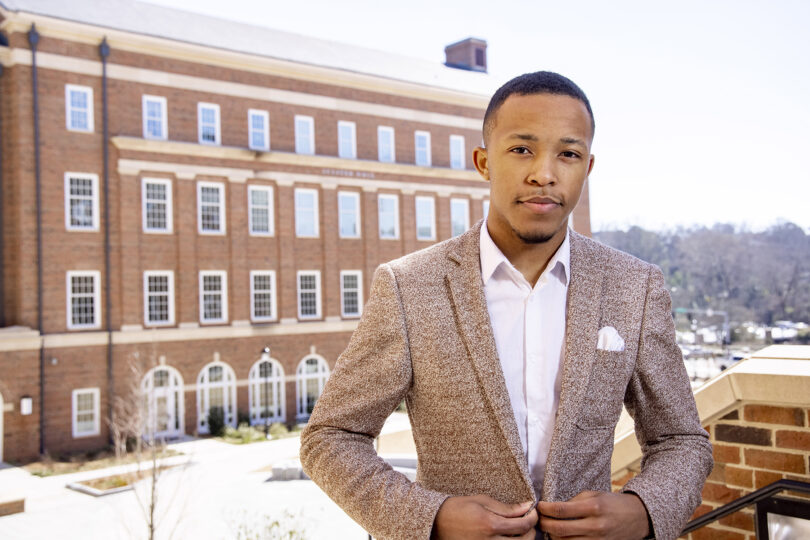 Jalen Polk, a fourth-year economics major in the Terry College of Business, was one of five recipients of the 2021 President’s Fulfilling the Dream Award. (Dorothy Kozlowski/UGA)

Jalen Q. Polk has the heart to serve others and the drive to succeed

For Jalen Q. Polk, leadership isn’t centered on what a particular person is capable of or what their background entails. It’s not even measured by how good of a job that individual believes they’re doing, or even the focus on who that person strives to be.

What leadership is really about, Polk said, is being adaptable to what people need in the moment and demonstrating one’s heart to serve others, even when it involves making unpopular and selfless decisions.

“Leadership is about demonstration and showing up. Therefore, it holds no barriers or discrimination toward those who can choose to step up, regardless of role or title,” he said. “Leading boils down to acknowledging where our hearts lie, authentically and justly working toward those visions we see.”

Polk, a fourth-year economics major in the Terry College of Business, was one of five recipients of the 2021 President’s Fulfilling the Dream Award, which acknowledges students, faculty, staff and Athens community members who honor the legacy of the Rev. Dr. Martin Luther King Jr.

“This award made me aware of my belonging to the UGA community,” Polk said about receiving the award. “During my first year, I was skeptical of the impact I could make here and struggled to call the University of Georgia home.”

Part of honoring King’s lasting legacy is leading others, and Polk is a prime example of an individual who is doing so. He’s the president of the Black Male Leadership Society and has served as a member of the University of Georgia Presidential Task Force on Race, Ethnicity, and Community.

He credits the Black Male Leadership Society for his decision to attend UGA. Polk visited Athens during Georgia African American Male Experience (GAAME) Weekend, an event hosted by the University System of Georgia’s African-American Male Initiative to retain Black men on the campus through social enhancement and exposing them early on to resources.

Polk said the entire executive board of the Black Male Leadership Society arrived in his first session during GAAME weekend after the parents departed, and they were excited to welcome participants to campus. He spoke with the president at the time, who told Polk about the impact UGA had on him, thanks to the faculty and resources available. The support from that interaction alone encouraged Polk to attend UGA over his other choices.

The following year, the Black Male Leadership Society adopted an after-school program, mentoring kids at Clarke Middle School, and Polk jumped at the opportunity to serve on the executive board. He was ecstatic to direct this initiative because of his passion for mentoring and the ways in which it’s transformed his life.

Polk described it as both a wonderful opportunity and his first real introduction to leadership. He went on to serve the organization as the vice president of operations before serving as president.

Navigating that role during a pandemic has been a “period of exploration,” he said.

“I just started to realize that it’s not so much about the goals I have for myself and being the best president I could be,” Polk said. “But in this time right now, the best president I can be is one who is compassionate and empathetic to those who are following me. The experience has allowed me to grow more assertive in advocating for my visions, sharing my own story and voicing the interest I have in impacting others. I’ve found an amazing opportunity to grow and lead.”

Still, Polk has been able to channel his charisma and leadership skills in part due to his inspirations: his father and King.

Polk’s father has always pushed him to hold himself accountable to being better each day, and Polk said many of the big transitions he’s faced in life have been smoother because of that tough coaching at earlier ages.

In a similar way, King’s history and legacy has inspired and will continue to inspire Polk.

“[King] came to terms with the fact that there’s a time for everything, and he gave it everything he had while leading with hope,” Polk said. “Generations from now will look back at King’s efforts when marching toward Montgomery from Selma, Alabama. They’ll continue to acknowledge a distinct narrative that stands apart from the one others attempted to impose on these trailblazers.”

Both Polk’s father’s and grandfather’s words of advice have stuck with him and motivated him to be the author of his own story.

“No matter what turmoil you end up facing in life, when you can create your own story out of unprecedented adversity that uplifts and inspires generations to come. This is something to be proud of, no matter what,” he said. “My dad and granddad always warned me to avoid standing on the fence during times of uncertainty or strife.”

Importance of sensitivities and vulnerability

During the 18th annual Martin Luther King Jr. Freedom Breakfast, held virtually on Jan. 15, Polk spoke of an experience he had during a youth leadership camp when the camp’s head advisor shared his concerns with a group of about 20 young Black men. He brought up the importance of being considerate and respectful toward their peers, as the advisor didn’t want these behaviors to be brushed over.

“That action allowed 15-20 young men—Black men—to open up and share tears around the fears that they had as they transitioned to college and high school, and personal identity shifts,” he said during the Freedom Breakfast video.

Polk said that for other young, Black men in particular looking to become leaders, one of the best pieces of advice he can give is to find a circle of people to grow alongside because the “smart person keeps a smarter person around.”

“I’d be nowhere near where I am today … if it wasn’t because of the people that were like trampolines when I continued to fall,” Polk said. “Learn that it’s OK to fail. It’s OK to make mistakes. You only fail when you fail to learn. It matters most how you respond, because people are watching your character in those moments of failure. Those moments have opened doors unexpectedly for me.”

Polk’s next move is to enter into the consulting world and earn his master’s degree. Ultimately, he strives to be a coach, mentoring student-athletes of color and assisting with their identity and leadership development. He’s particularly interested in nonprofit leadership that combines mental health and sports wellness to aid personal growth for marginalized groups who struggle with recognizing their place in the world.