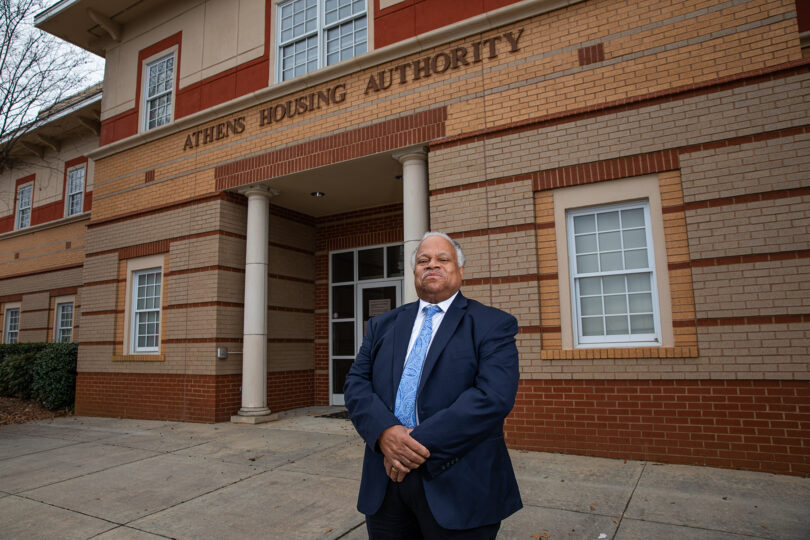 Charlie Maddox—a local pastor, veteran, life member of the NAACP and an established community leader—was one of five recipients of the 2021 President’s Fulfilling the Dream Award. (Photo by Chad Osburn/UGA)

“Somehow, I heard him say, ‘Charlie, they got your boy today. They got him in Memphis.’ And I went on to class because it just didn’t hit me then,” he said. “Once I got to class, word was getting around, but it was strange. I think a lot of people were watching to see how I was going to react.”

Maddox, along with a few other Black students, traveled to Atlanta to march in the procession following King’s death.

He reflected on this moment during the 18th annual Martin Luther King, Jr. Freedom Breakfast, which was held virtually on Jan. 15.

Maddox—a local pastor, veteran, life member of the NAACP and an established community leader—was one of five recipients of the 2021 President’s Fulfilling the Dream Award, which acknowledges students, faculty, staff and Athens community members who honor King’s legacy.

“I’ve gotten a lot of awards,” he said, “but to be selected was a high honor. Some things you just get in the past, but that tops the list.”

Maddox grew up in Athens. He was educated in the Clarke County School System and attended UGA. He’s left his mark on the city through his service and dedication. For example, his experiences during his youth led him to serve for more than 25 years on the Athens Housing Authority Board.

“I lived in public housing for a time during my youth, and there were a lot of discrepancies that I saw then as a youth that I couldn’t do anything about,” he said. “God afforded me the opportunity when I joined the board to become an advocate for the tenants there.”

Although Maddox has certainly dedicated his life to serving Athens—including running for mayor in 2006 and serving through organizations like the Athens Area Habitat for Humanity, the Food Bank of Northeast Georgia and Hope Haven of Northeast Georgia—his proudest accomplishment is his marriage to his wife, Linda, of 44 years and their five children.

For Maddox, faith is an integral part of his life. In fact, both his upbringing and his devotion to his faith led him to life in the ministry.

“I grew up in the church. We were a church-going family,” he said. “That’s just what you did. You didn’t have a choice. It was a great social outlet. That’s where you met your friends and got to do things that normally, as an African American kid, we didn’t get to do.”

In 1991, his experiences in the church prompted Maddox to join the ministry. Maddox gave his first sermon in 1993 and became the pastor of Twin Oaks Baptist Church in Washington, Georgia, for 14 years. Now, he serves as pastor at White Rock Baptist Church.

Although the COVID-19 pandemic has altered many people’s schedules, Maddox’s mornings still start before 7 a.m. In a typical day, he dials in for the prayer line at his church, where they do devotion and pray. Prayer requests are addressed, and then there are usually a few Zoom meetings to attend.

“I’m retired, so it’s easy for me to move from one particular thing to another,” Maddox said.

Looking toward the future

As Maddox continues to honor King’s lasting legacy, he said he looks to future improvements and growth from both Athens and UGA. He attended UGA in the ’60s and spoke to what he envisions for Athens and the university in the future.

“There needs to be a greater partnership,” Maddox said. “I think UGA does its part now. … I think when I was there, I counted nine African American students. I’ve seen it grow some, but I’ve also seen the university grow.”

When remembering King’s legacy, Maddox said he hopes that current students will remember the historic and often painful sacrifices made to pave the way for progress.

“Sometimes, I don’t believe that the younger students there realize the opportunities and the sacrifices that were made to put them in that position,” Maddox said. “I’ve met some wonderful students that are just sincere, and they’re dedicated but that history part—it escapes them oftentimes.”