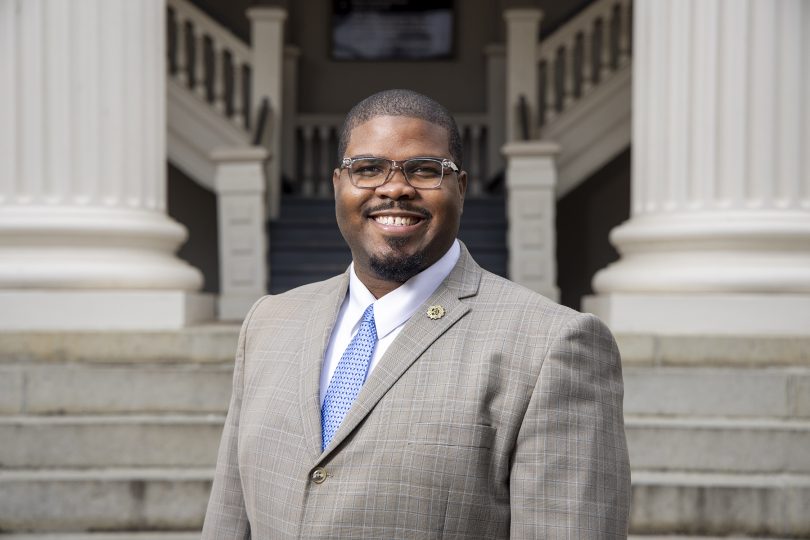 Narke Norton is assistant director for recruitment and diversity initiatives in the Graduate School. (Photo by Peter Frey/UGA)

Narke Norton sang in his home church for the first time when he was 12 years old.

That performance eventually led to communicating his experiences as an underrepresented student, which led to a career dedicated to helping others find their own voices.

Norton, assistant director for recruitment and diversity initiatives in the Graduate School, was one of five recipients of the 2021 President’s Fulfilling the Dream Award, which acknowledges students, faculty, staff and Athens community members who honor the legacy of the Rev. Dr. Martin Luther King Jr. The awards are given annually during the Freedom Breakfast, held virtually this year on Jan. 15.

“This award makes me anxious and nervous,” he said. “I have so much more work to do. It’s not a ceiling of congratulations. It’s a challenge to do more. The expectation, the responsibility and the burden to do what I am called to do is heavier and greater because I have received this award. It gives me a greater fire to work harder and to serve greater.”

Norton’s affiliation with UGA began when he was 15. He applied to the UGA Young Scholars Program as an intern on the Tifton campus. While earning his bachelor’s degree, he served as an administrative assistant on the Tifton campus before transferring to the Athens campus. In 2012, during his junior year, he took a role as an interim program coordinator in the College of Agricultural and Environmental Sciences. He also served as a student worker in the same college. After his graduation in 2014, he was hired as a program specialist and eventually moved up to program coordinator, where he served for more than three years before moving to his current position.

It was the capstone project in his Master’s of Education in Higher Education Administration program that prompted the move to the Graduate School. It involved interviewing people whose jobs he eventually might like to have. Norton determined that his long-term goal is to be a dean of students. The interviews also helped him to look at jobs differently and see how he could serve the university in a different capacity. He’s also pursuing his doctorate in college student affairs administration in the Mary Frances Early College of Education.

It was through his postgraduate programs that Norton said he truly found his voice. Now he’s helping students find their own.

“If I see my reflection of my identity as a first-generation, rural, Black student … my mind’s eye has projected what my possibilities are,” he said. “I think it so important for students to see people like themselves.”

What Norton values most about working with students is seeing their self-development and growth and being a part of that journey.

“My work matters because I’m not focusing on the work itself. I’m focusing on what it produces,” he said.

But Norton’s involvement with UGA goes far beyond his actual work. As a student, he took the opportunity to get involved in things that excited him. That included eight student organizations, and he served as an officer in the majority of them. As a staff member, Norton began serving on committees. In total, he’s served on more than 33, including the Freedom Breakfast committee, the Georgia African American Male Experience committee, Movimiento Latino committee, the TEDxUGA Advisory Council (and as a TEDxUGA speaker) and the Black Faculty and Staff Organization.

“I’ve committed to serving the university community and the Athens community in ways that I’ve been asked. And when I’ve been asked, I’ve said yes. People say to be careful of how much you put on your plate, but sometimes, I’ve just grabbed a bigger plate,” he said. “Those things fulfill me and contribute to my joy.”

For Norton, all those leadership roles have equipped him to be ready to keep King’s dream alive and help it come true.

“All of these things are dominoes that are not moving backward but pushing me forward,” he said. “You’re part of a grand scheme. You are part of that arc that is bending toward justice. We are essential as workers in that dream to develop it, to build it further, and to go beyond.”

Norton believes everyone can help be part of King’s dream in the same way that a rock creates ripples in water. There are many ways to create change—serving on committees, volunteering where needed and educating people on ways to re-envision and redefine what service means.