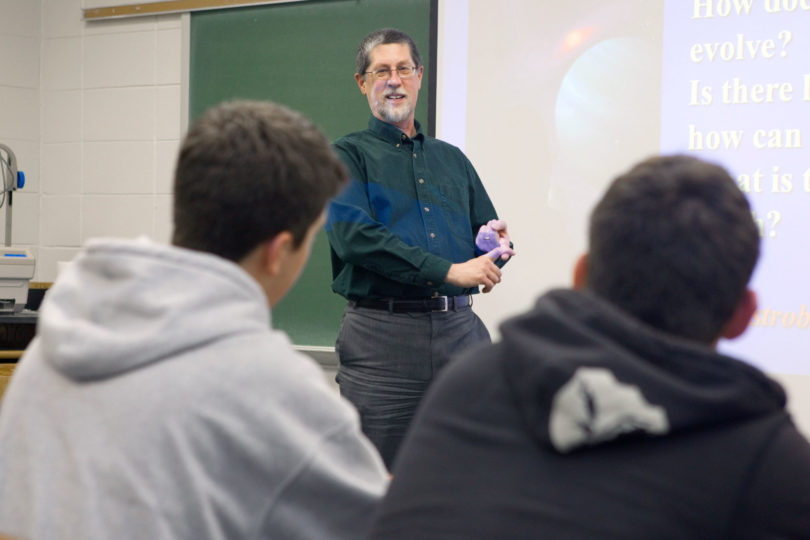 Mark Farmer, professor and chair for biological sciences, believes that anyone given the opportunity has a chance to prove themselves in scientific research.

“In many ways, science is the perfect field for anyone to succeed in regardless of race, ethnicity or gender,” he said. “Scientific ideas do not succeed or fail on the basis of the personality of the scientists. It’s your discoveries, your data, your interpretation of your data, the care in which you approach science that enables a person to succeed or fail.”

That belief, which is demonstrated through his work in getting students from underrepresented groups interested in science, led to Farmer receiving a 2013 President’s Fulfilling the Dream Award, which honors local leaders who work to make Martin Luther King Jr.’s dream of equality and justice a reality. The award was presented to Farmer at the Freedom Breakfast in January.

Farmer works with minority students through the Louis Stokes Alliance for Minority Participation, based in the Office of Institutional Diversity. LSAMP is a National Science Foundation-funded initiative that provides research opportunities for minority students to develop their skills in research.

Through that program and through his faculty position in the Franklin College of Arts and Sciences, Farmer has helped foster the careers of young scholars in the biological sciences and offered opportunities for independent research in the lab.

For some students who have faced adversity just getting to college, the idea of a job in scientific research has never been considered.

“When you come to a university as a faculty member, you start to interact with students from diverse backgrounds,” he said. “When you’re dealing with individuals who are first-generation scholars or who are putting themselves through college-sometimes with the support and sometimes in opposition to their family-it becomes even more important to provide those opportunities.”

Of course, it’s up to the students to ultimately prove themselves.

“I don’t think everybody can do everything,” he said. “But I do think everyone should have the opportunity to try to succeed at everything. Just giving students an opportunity to use their skills and interests in ways that, from their social and family background, they may have not ever considered, I think, is as important as anything else I teach in the classroom.”

In addition to offering opportunities, Farmer also raises the expectations of students in their own abilities. He has encouraged some students to continue their undergraduate scientific studies into graduate school, which improves their chance for success in science.

Farmer said he was surprised to learn he would be receiving the award.

As for the work that earned him the recognition, Farmer said, “Hopefully I have made a positive impact on people’s lives. If I’ve done that, then I’ve succeeded in my job.”