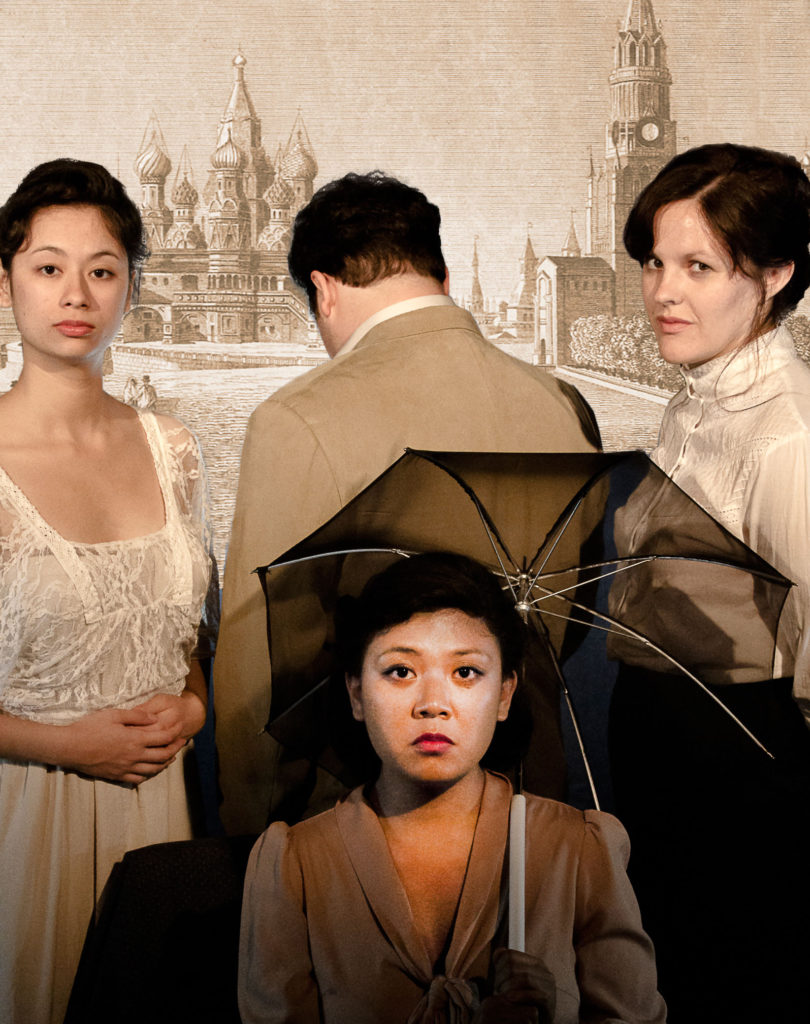 From left to right are UGA students Kayla Sklar as Irina

Athens, Ga. – The University Theatre at the University of Georgia will present “Three Sisters,” Anton Chekhov’s classic drama about family, longing and the desire for change, on Oct. 9-14 at 8 p.m. and Oct. 14 at 2:30 p.m. in the Cellar Theatre.

Originally produced in 1901, “Three Sisters” follows the life of the Prozorov family across several years. Sisters Natasha, Olga and Irina live in a dreary Russian town and long to escape to the exciting metropolis of Moscow. Each struggles with dreams inhibited by the harsh pressures of reality and the strong tethers of responsibility. Plans fall by the wayside, and the characters are propelled to forge new paths to their own happiness.

“In ‘Three Sisters,’ Chekhov has created some of the most profound, most challenging and most exhilarating roles ever written for actors,” said David Saltz, head of the UGA department of theatre and film studies.

Inspired by Chekhov’s poetic and modern use of time and space to evoke a delicate and transitory world, director Ray Paolino, an associate professor in the department of theatre and film studies, uses a minimalistic set and few props to allow the strength of the text and actors to shine through.

“Present-day audiences relate to this play because its characters have a magnetic force that appeals to the dreamer, the idealist, the long-living, the sufferer, the romantic,” Paolino said. “Who among us does not reside in one of these groups at some point?”

Oldest sister Ólga, played by senior theatre and English major Shelli Delgado of Athens, is an unmarried schoolteacher who assumes the matriarchal role in the family. Middle sister Másha, played by master of fine arts in performance student Stephanie Murphy of Chicago, is unhappily married to Kulýgin, played by senior theatre major Will Murdock of Arlington. Youngest sister Irína, played by junior marketing and mass media arts major Kayla Sklar of Atlanta, is full of expectation, feeling she will only find her true love when she returns to Moscow. Their brother Andréi, played by master of fine arts in performance student Zack Byrd of Wilkesboro, N.C., also dreams of a life in Moscow but is heavily in debt, stuck in the village as a clerk in the county council under the president, Protopov, who is his wife’s lover.

To evoke the world of the play fully, Paolino also is using student musicians who participate actively throughout the performance.

The University Theatre’s production of “Three Sisters” is the first Studio Series show of the 2012-2013 season. The Studio Series consists of four plays presented in an intimate and stripped-down format.

Tickets are $12 for the general public and $7 for students. For tickets, see http://www.drama.uga.edu/box-office, call 706/542-4400 or see the Performing Arts Center box office. Tickets also may be purchased at the door before the show.