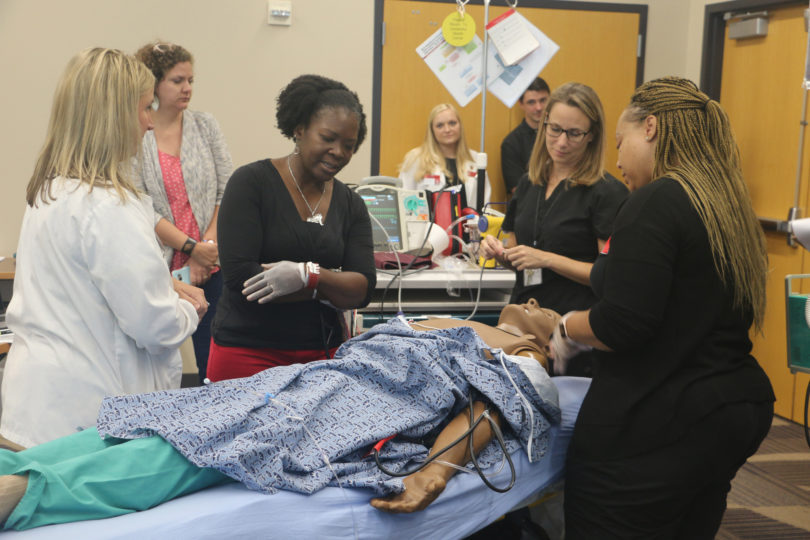 University Health Center clinicians talk with SimMan to better understand his symptoms during a simulation event. (Photo by Lindsey Derrick)

A Code Blue sounded in the hallways of the University of Georgia Student Health Center on a recent Friday. Doctors, nurses, nurse practitioners, pharmacists, physicians’ assistants and other medical staff members rushed to the patient with equipment ready to go.

But this was not any normal Code Blue. This exercise was part of a “Code Blue Drill” where University Health Center staff members practiced medical emergency situations with simulation-based equipment.

Simulation mannequins—including Laerdal’s SimMan, used in this drill—can perform human-like acts such as talking, blinking and having a heartbeat. They can also be programmed to reenact ailments like a seizure and heart attack.

Once the Code Blue was sounded, University Health Center clinicians had to figure out what exactly was wrong and the best way to treat SimMan. The drill featured three different medical emergencies: a cardiac arrhythmia in a 22-year-old, a seizure in a 20-year-old and a severe systemic allergic response in a college-aged student.

The team had to assess each situation and figure out how to best work together to help the patient. The biggest goal of the exercise was to build teamwork and perfect individual roles before going into an actual emergency situation.

Once the scenarios were completed, Dr. Aimee Martin, campus director of simulation at the Medical Partnership, led a discussion to go over what went well and what could be improved.

Finbar Woitalla, a physician at the Health Center, said the event was a huge success. “The realism of the scenarios and the mannequins helped infuse a true sense of urgency and tension that are needed to help us learn and grow from this kind of training,” said Woitalla.

Len DeRamus, instructor of emergency medicine, said this event was the first of its kind for the Health Center.

“This opportunity allowed them to practice emergency drills and treatment of certain conditions that the simulator can mimic with a high degree of realism,” said DeRamus. “Additionally, we reviewed team roles and dynamics during the drill as that improves care delivery during a crisis.”

“Emergencies are chaotic by nature, and it is critical that the team function above the fray to optimize efficient, accurate care of the patient,” said Woitalla. “This session reminded us all of that important aspect of emergency care and how to quickly establish and maintain this vital team function.”

The staff members were so impressed with the practice that they expressed a desire to run the exercise at least twice per year.

“The universal sentiment was that we have more of these events as it can only strengthen us more,” said Woitalla.