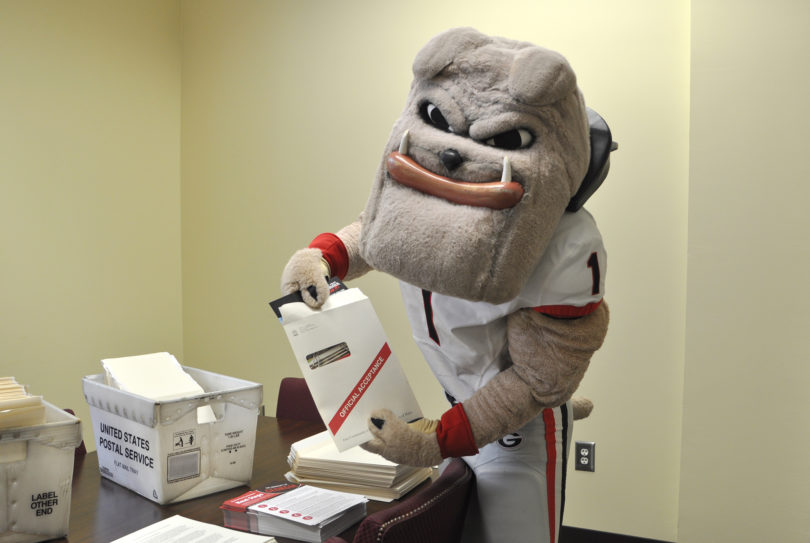 a senior at Schley County High School in Ellaville

Athens Ga. – Almost 7,500 high school seniors will have additional cause for celebration this holiday season, as they learn today that they have been offered early admission to the University of Georgia for fall semester 2015. This is the largest and strongest academic pool of early applicants in university history.

UGA is again notifying students of their early action admission decisions in November, but this year the applicants are hearing the results earlier than ever-a full week earlier than the last three years. Decisions will be available by late afternoon today via the password-protected status check on the myStatus page at www.admissions.uga.edu.

“Technology has changed not only the way we notify students of admissions decisions-both good news and bad, but also how students apply,” said Nancy McDuff, associate vice president for admissions and enrollment management.

The earlier notification is due in large part to the ability to accept electronic documents from high schools in the admissions application process, as well as students being aware of and meeting the required deadlines.

“Technology allows us to get the documents matched to the students’ files much faster than usual. It also allows students and their families to check their on-line status at their convenience from different locations and platforms,” McDuff said. “For anxious families, early is always better.”

“In addition to the decisions being available on the myStatus page, letters will go out in the mail for accepted, deferred and incomplete students. We will not mail letters to students who have been denied admission, since getting that letter after learning the news via myStatus is a double blow,” said David Graves, senior associate director of admissions.

The admissions office received 13,300 early-action applications for the freshman class that will enter in 2015-another record number of applicants, and a very academically accomplished group of high school seniors. Those applying for early action submit applications by an Oct. 15 deadline and learn that they are admitted, denied or deferred to the regular-decision pool. Those who are deferred are asked to submit additional information by the regular-decision deadline of Jan. 15.

“We always try to stress to early-action applicants that if the admission decision was deferred, they still have a chance to be part of the incoming freshman class,” McDuff said. “In the past few years, we have admitted about half of the students who were initially deferred and then completed Part II of the application by Jan. 15. Being deferred at this point does not mean that an application is denied. It means we are still considering their application.”

Since early-action decisions are based solely on academic criteria, McDuff noted that in recent years many students wait to apply until the regular-decision deadline in order to have additional factors considered, such as high school activities, volunteer work and senior year fall grades. “For some students, that’s a good decision, and we encourage it,” she said.

This year’s early-action applicant pool is again academically strong and diverse, with high test scores and grades and having chosen a rigorous curriculum.

Similar to last year, those offered admission at this point are academically superior with an average GPA exceeding a 4.0, a mean SAT of 1374 (with a mean SAT writing of 659), or a mean ACT of 30. This year, over half of the students offered early action admission were admitted based on their ACT scores being the stronger of the two tests. Those students admitted through early action also took an average of seven advanced placement or international baccalaureate classes.

“The odds of being offered admission are always driven by how strong a student looks relative to the rest of the applicant pool,” McDuff said. “The first offers of admission are extended to students with the strongest academic records. The most important factors in the regular-decision process are also academic, in particular grade point average and the rigor of the courses the students have taken relative to what is available in their school.

“However, regular-decision applications and applications from students deferred from the early-action program are given a holistic review that includes other factors that tell us about students’ talents and activities outside the classroom.”

McDuff predicts that by Jan. 15 the admissions office will have received more than 22,000 total applications for the incoming class, with a target enrollment of 5,200 new first-year students entering in summer or fall and another 200 in spring 2016. Typically, about half the students offered admission will enroll at UGA, a comparable yield to other selective universities.

For applicants and others wanting additional information about UGA’s admissions process, an active blog on the undergraduate admissions office website is hosted by Graves, who answers questions and provides advice. The blog may be accessed at http://ugaadmissions.blogspot.com. For more information on admissions at UGA, see www.admissions.uga.edu.