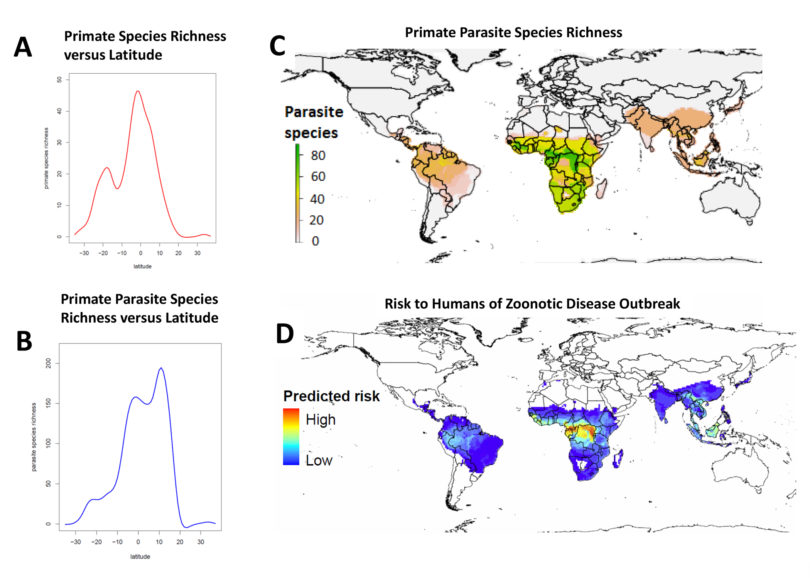 Athens, Ga. – Ecologists at the University of Georgia are leading a global effort to predict where new infectious diseases are likely to emerge. In a paper published in Ecology Letters, they describe how macroecology—the study of ecological patterns and processes across broad scales of time and space—can provide valuable insights about disease.

“Applying the tools and perspectives of macroecology can enhance our understanding of disease ecology and large-scale patterns of disease diversity,” said the study’s lead author Patrick R. Stephens of UGA’s Odum School of Ecology. “It can also do something that other existing widespread approaches can’t, which is to help us predict where new unknown diseases might come from.”

The need to make such predictions is increasingly pressing.

Infectious diseases cause some 9.6 million deaths each year. Roughly 60 percent of those diseases originate in wild animals before jumping to people. Human population growth, encroachment into areas where wildlife live, and increasing international trade and travel all combine to raise the chances that new diseases will emerge and spread.

The paper reviews the research in the relatively new discipline of macroecology, covering important findings and advances in computational and statistical methods and explaining how macroecological approaches can inform human health and conservation initiatives.

Macroecology uses advanced computational techniques to look for patterns in enormous data sets. When applied to disease ecology, this kind of analysis can help scientists understand relationships among parasites, hosts and their environments.

One such project cited by Stephens combines a study of the factors that allow wild host species to share parasites with an analysis of primate diversity.

“One of the major findings is that species that are closely related tend to have a lot of diseases in common,” Stephens said. “Combining primate diversity with information on which of those primates are more closely related to humans yields a map of areas where there might be a high risk of a new infectious disease jumping out of primates and moving into humans.”

That study and others point to another strength of the macroecological approach.

“Macroecology has a lot of important insights for that, and for the conservation of threatened species.”

The paper is the product of a research coordination network supported by a jointly funded five-year grant from the National Science Foundation, National Institutes of Health and U.S. Department of Agriculture to the University of Georgia under grant number DEB 1316223. Led by Stephens, the network convenes working groups that meet periodically at UGA.

“What’s important about the research coordination network is not just that we’ve got some of the most prominent macroecologists and disease ecologists in the world, it’s that we’re bringing together experts from many different disciplines, from statistical methods to phylogenetic comparative methods,” Stephens said. “That’s allowing us to take on projects that I don’t think any of us would have been able to do on our own.”

Those projects include studies of patterns of disease overlap in wild ungulate species, how species’ range shifts in response to climate change will affect parasite sharing, and analysis of biological traits of host species most central in host-parasite networks.

“For conservation, for human health and for agriculture, understanding how diseases move between species and where and when new diseases might emerge are all really important questions,” Stephens said. “Macroecology can’t tell us exactly what’s going to happen, but it’s really the best approach we have for figuring out what’s more or less likely to happen with respect to disease emergence, disease globalization and population declines and species extinctions driven by disease.”

The study, “The macroecology of infectious diseases: A new perspective on global-scale drivers of pathogen distributions and impacts,” is available online at http://onlinelibrary.wiley.com/doi/10.1111/ele.12644/full.