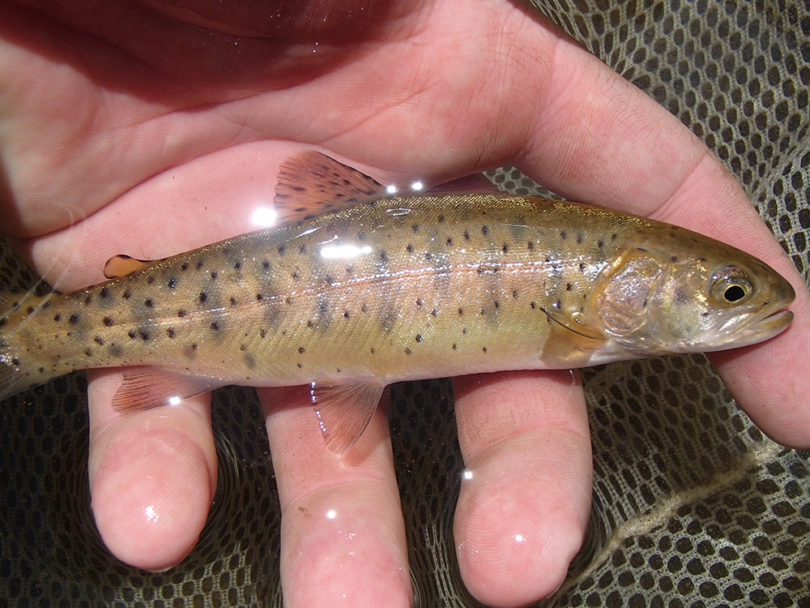 A juvenile Lahontan cutthroat trout captured during a survey at the Marys River in Nevada. (Photo by Jason Barnes)

A new population viability model, with an accompanying web app, is helping scientists to better forecast population changes and extinction risk for imperiled species. The method was developed by ecologists at the University of Georgia River Basin Center with support from NASA and the help of federal, state and nonprofit fish and wildlife personnel.

It is already being used to manage Lahontan cutthroat trout, a federally listed threatened species in the western U.S.

According to lead author Douglas R. Leasure, former postdoctoral associate in the UGA River Basin Center, the new model solves a problem common to existing methods of estimating population viability—namely that they require an enormous amount of data for every population of interest throughout a species’ range. And those data can be hard to come by.

“Normally a population viability analysis requires several years of data from a single population to estimate extinction risk, and by ‘several’ I mean as many as 10 years or more,” Leasure said. “That’s quite an investment to make if your conclusions are only relevant to that single population.”

Many imperiled species live in isolated populations in out of the way places, where monitoring is infrequent or nonexistent. The model developed by Leasure and Seth J. Wenger, director of science at the River Basin Center, and their co-authors gets around this issue by sharing information among populations.

“Our model allows us to use information from populations where a lot of data have been collected to inform our decision-making for populations where we don’t have much data or have no data at all,” Leasure said. “It makes much better use of the data that taxpayers have invested heavily in collecting over the past 30 years.”

Together, these approaches allow the model to tie site-level data to population-level outcomes.

Leasure and his colleagues built their model around Lahontan cutthroat trout, a species native to the Great Basin area of California, Nevada and Oregon. Over the years, researchers from different agencies and universities have conducted surveys of the federally listed species at many locations, but pulling that data together was a challenge.

“There was actually full-time staff at Trout Unlimited devoted to that,” said Leasure. “They would call up these agencies, oftentimes drive out to their field offices, go through file cabinets of paper data forms and put all that into a database. It was a huge effort.”

The model also required consistent measurements of habitat characteristics for all included populations, which was where NASA came in.

“NASA is really good at making large-scale global measurements,” said Leasure. “We used NASA LANDSAT images to estimate vegetation quality in the riparian zones of all the rivers where these trout exist. And we can measure that every single year for every single population, and the measurements are directly comparable through time and space.”

As well as estimating population sizes and extinction risks, the model is designed to assess the effects of different management actions and changing environmental conditions on populations.

To ensure that the model was accessible to managers and decision-makers in a format they could use, Leasure developed a web app that allows users to browse a map, select a stream and see estimates of its Lahontan cutthroat trout population, as well as forecast simulations under changing habitat conditions.

“We had regular meetings with a group of stakeholders where we’d get everyone together in the room, and they would help us understand what, exactly, the results were that they needed to help them make decisions,” Leasure said. “It’s probably the thing I’m most proud of from the project. We’ve been pretty happy that it’s been picked up by managers, that it’s actually being used.”

The model is already being adapted for use in other contexts too. Leasure, who is now with the international research group WorldPop, is applying its concepts to building models to map human populations in places without regular census counts.

“If we were able to build this same model for people, that would be a really big achievement because then we could share information among countries where some countries have little or no data collection,” he said. “It’s pretty striking how the concepts from this model apply.”

The paper, “Hierarchical multi-population viability analysis,” appears in Ecology. It is available online at https://esajournals.onlinelibrary.wiley.com/doi/full/10.1002/ecy.2538. The web app is accessible at trout.shinyapps.io/lahontan.

Besides Leasure and Wenger, the study’s co-authors are Nathan D. Chelgren and Jason B. Dunham of the U.S. Geological Survey; Helen M. Neville, Daniel C. Dauwalter, Robin Bjork and Kurt A. Fesenmyer of Trout Unlimited; Mary M. Peacock of the University of Nevada-Reno) and Charlie H. Luce, Abby C. Lute and Daniel J. Isaak of the U.S. Forest Service. It was supported by the NASA Ecological Forecasting program, the U.S. Bureau of Land Management, the U.S. Fish and Wildlife Service, the National Fish and Wildlife Foundation and Trout Unlimited.