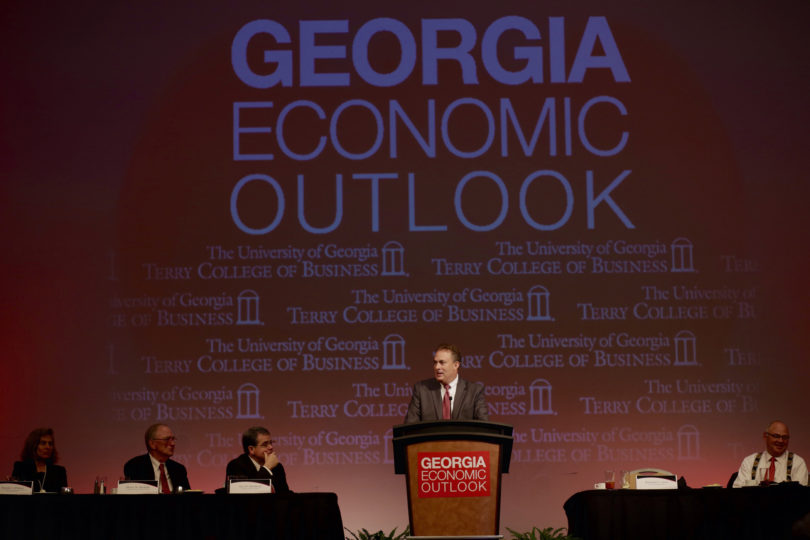 Terry College of Business Dean Benjamin C. Ayers gives the state outlook at the Georgia Economic Outlook at the Marriott Marquis in Atlanta

Atlanta, Ga. – While Georgia’s economy will grow faster than the nation’s next year, the pace of job growth in the Peach State will slow, according to the Georgia Economic Outlook report by the University of Georgia Terry College of Business.

“What accounts for our optimism? First, Georgia has a large number of major projects in its development pipeline,” he said. “Second, Georgia’s economy will get more leverage from the housing recovery than the national economy. Third, Georgia will see much faster population growth than the nation. Finally, continued low oil and gas prices are much better for Georgia’s economy than for the U.S. economy.”

The Economic Outlook series is the state’s premier forecasting event. Using economic modeling from Terry’s Selig Center for Economic Growth, the series will travel to nine other cities across the state this season, sharing economic predictions with business and government leaders. To see a full calendar of events, visit www.terry.uga.edu/eo.

Georgia’s 2016 growth stems in part from projects already in the economic development pipeline, such as Baxter International’s new facility and GM’s IT-innovation center, as well as a continued upcycle in the housing recovery, supportive demographic forces and a rise in small business starts and expansions, Ayers said.

But while these projects will create employment opportunities, job growth will slow in the coming year.

“One reason why Georgia’s job growth will slow is that in the wake of the Great Recession many companies were too cautious about hiring and were essentially playing catch up in 2014 and 2015,” Ayers said. “Now, most companies are no longer significantly understaffed. So, this extra push for job growth is gone. A second reason is that businesses’ profits are coming under more stress. That’s partially because expectations about the national and global economies moving into higher gear have not been realized.”

Specifically, Georgia’s non-farm employment will rise by 2.4 percent, which is nearly half a percent below the estimate for state employment in 2015.

“On a more positive note, the quality of the jobs created is likely to increase,” Ayers said. “For example, a larger share of the new jobs created will be full time rather than part time. Also, Georgia’s tighter labor market should cause wage growth to accelerate.”

The nation as a whole won’t fare quite as well. While the U.S. can expect modest GDP growth at 2.5 percent, it will average only a 1.4 percent rise in employment. This is still good news, but it represents a slowdown of the post-Great Recession economic momentum.

The entire Economic Outlook report, outlining industry trends in Georgia and the nation, is available for purchase online at terry.uga.edu/selig.

For more information or to register to future events, see terry.uga.edu/eo.