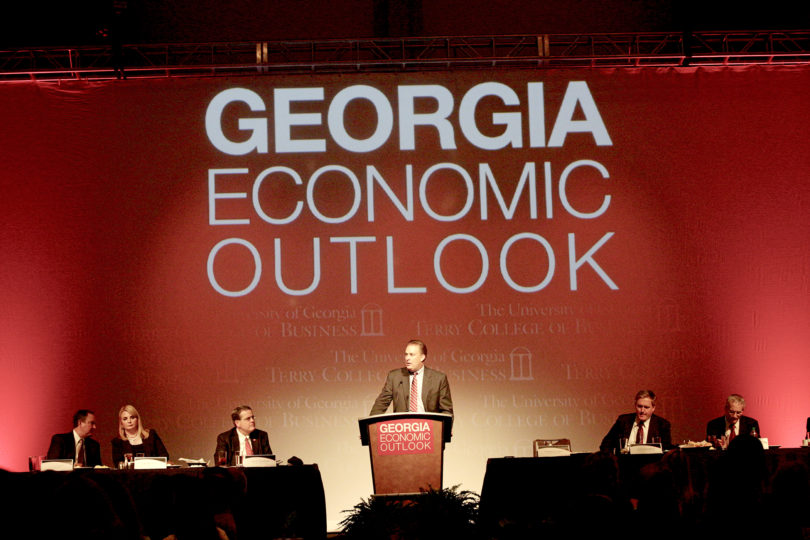 Atlanta, Ga. – Georgia’s economy will continue its upward trajectory next year and beyond, according to the Georgia Economic Outlook forecast from the University of Georgia’s Terry College of Business.

“Many of the same forces that contributed specifically to Georgia’s growth in the past two years will be even stronger in 2017,” said Dean Benjamin C. Ayers. “First, Georgia has even more projects in its economic development pipeline. Second, Georgia’s economy will get more leverage from the housing recovery than the national economy. Third, Georgia’s manufacturers will continue to do better than U.S. manufacturers. Fourth, Georgia will see faster population growth.”

Thanks to a pro-business political climate that has brought major relocation and expansion projects to the state, Georgia’s economy is expected to grow 3.2 percent in 2017, ahead of the nation’s 2.6 percent GDP growth rate, Ayers said. He also predicted that nominal personal income will increase 5 percent, and non-farm employment will climb 2.1 percent.

Ayers delivered the forecast, prepared by the college’s Selig Center for Economic Growth, to an audience of about 700 business leaders, government officials and chamber delegates. Following the Atlanta event, the Georgia Economic Outlook series will tour the state, visiting eight cities to deliver a local, state and national forecast. The schedule and ticket information are available at terry.uga.edu/eo.

The complete Georgia Economic Outlook forecast is available for purchase online at terry.uga.edu/selig.

“The main takeaway is that it’s not too late to take advantage of Georgia’s economic expansion,” Ayers said. “When it comes to landing economic development projects our success reflects cost, logistical and tax advantages that make us very competitive with other states. Georgia also fields a very competitive team of economic development professionals and is viewed as a place where there’s a good working relationship between government and other major players.”

However, the state faces some broader economic challenges. A strong U.S. dollar, weak foreign currencies and Federal Reserve interest rate hikes will all tap the brakes on economic growth. The risk of U.S. recession, Ayers said, stands at 35 percent-slightly higher than the last few years.

Complicating the matter is the transition that comes with new leadership in the White House.

“With a new administration in Washington, there will be more economic policy uncertainty. That will put some business decisions on hold. It may even delay some decisions to expand, or to hire,” Ayers said. “But it also brings an opportunity to implement policies that will improve economic growth through tax reform, regulatory relief, and spending on productivity-enhancing infrastructure. If leaders get it right, the country will benefit substantially.”

Ayers was joined on stage by Thomas J. Cunningham, chief economist for the Atlanta Metro Chamber of Commerce, who delivered a forecast for the metro area. The Georgia Economic Outlook series is the largest outreach program hosted by the Terry College of Business. For 34 years, it has been the premier forecasting event in the state of Georgia.