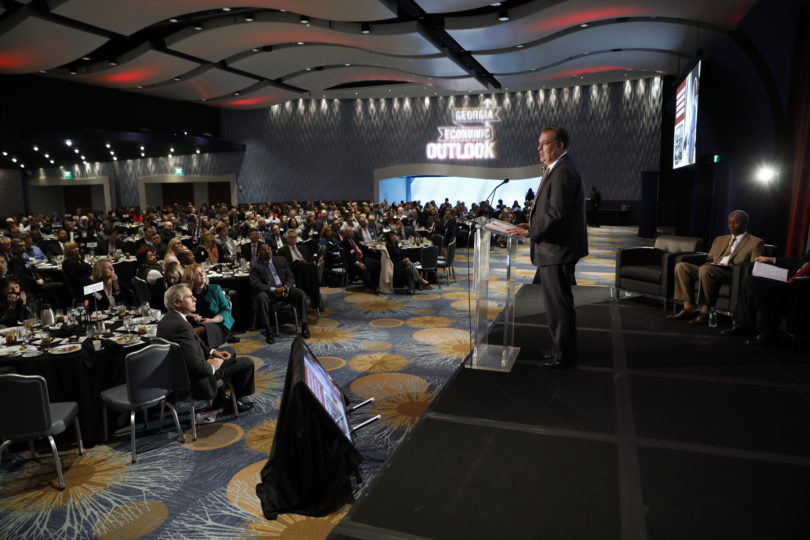 Georgia’s economic growth will outpace the nation’s for the sixth straight year, according to the latest forecast from the University of Georgia Terry College of Business.

The forecast is based on the Georgia Economic Outlook report, prepared by the Terry College’s Selig Center for Economic Growth. The complete forecast is available for purchase at terry.uga.edu/selig.

Ayers delivered the annual forecast Dec. 6 to an audience of 600 business leaders, government officials and chamber delegates. Following the event, the Georgia Economic Outlook series will tour the state, visiting eight other cities to deliver local, state and national forecasts. The schedule and ticket information are available at terry.uga.edu/eo.

While the economic expansion is slowing down a little, the state still has bright prospects for growth in 2019 and beyond, Ayers said.

“Site consultants recently ranked Georgia as the top state in which to do business for the sixth straight year, so it is not surprising that Georgia’s economic development pipeline is full,” Ayers said. “The buildout of new headquarters is an important factor powering Georgia’s economic growth. There are 26 companies with headquarters in Atlanta that rank in the Fortune 1000, placing Atlanta behind only New York City and Houston.” 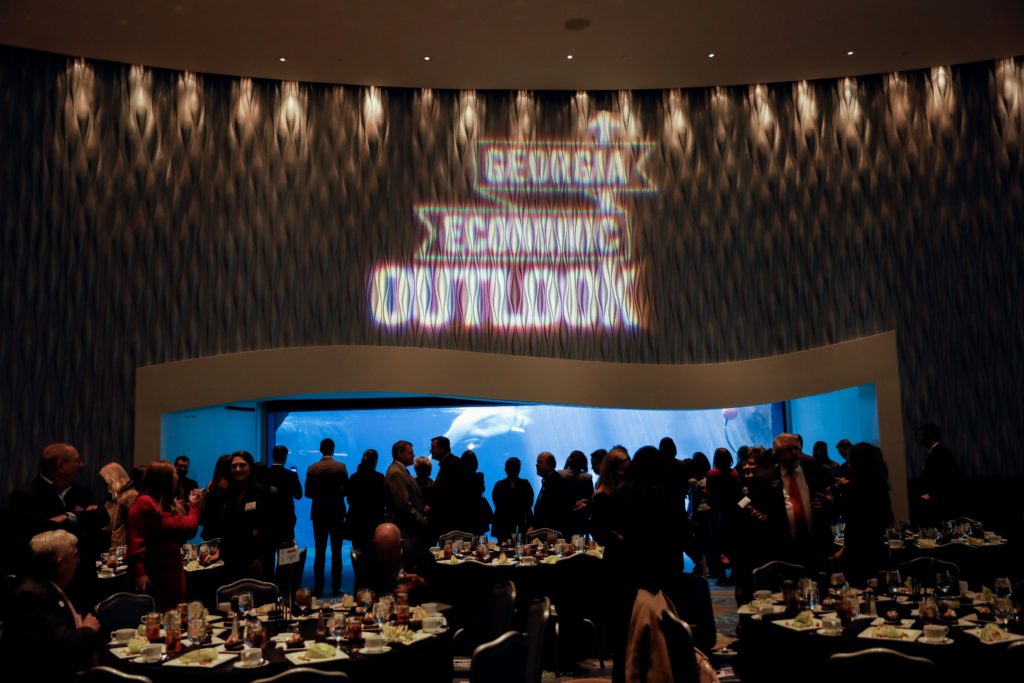 The annual forecast was delivered Dec. 6 at the Georgia Aquarium to an audience of 600 business leaders, government officials and chamber delegates. (Photo by Andrew Davis Tucker/UGA)

Headwinds for the state’s economy will come from low unemployment rates, leveraged lending to non-financial businesses, rising asset prices and a large federal deficit. But while these factors will hamper growth, they are not likely to trigger a recession in 2019, Ayers said.

“The very tight labor market will prompt faster growth in wages and salaries,” he said. “In contrast, both job growth and GDP growth will slow because it will become more difficult to fill open positions. On the plus side, we expect wage hikes to benefit lower-paid occupations that did not benefit much from the earlier stages of this economic expansion.”

The fastest-growing sector of the state’s economy will be construction, followed by education and health services, leisure and hospitality, business services, and mining and logging. No major sectors are expected to see a net loss of jobs. Overall, Georgia will benefit from a 1.5 percent rise in employment, which is just shy of its 1.7 percent gain in 2018, but still higher than the nation’s expected rate of 1.3 percent, Ayers said.

Georgia’s economy will grow 3 percent in 2019, just a half-percent lower than last year, while U.S. GDP will increase by 2.5 percent. Personal income growth in the state will grow 4.9 percent, down slightly from 5.4 percent last year, but still higher than the nation’s 4.5 percent increase for 2019.

Trade tensions, however, could limit the state’s growth.

“Georgia is the nation’s 11th-largest export state and seventh-largest import state,” Ayers said. “We have a substantial transportation, distribution and logistics industry focused on international trade. Georgia’s large manufacturing and agriculture industries also depend heavily on easy access to global markets. That means Georgia is extremely vulnerable to any major step back from globalization. But more favorable trade terms, like those we’ve seen with NAFTA, could boost our exports and enhance the prospects for our transportation and logistics industry.”

While every metropolitan area in Georgia is expected to see positive growth in 2019, not all regions will grow at the same rate.

“In 2019, Augusta and Gainesville will experience the fastest job growth. Athens and Atlanta will see average to slightly above-average job growth,” he said. “Albany will see the slowest job growth, reflecting several of the same factors that will cause rural Georgia to experience below-average growth.”

Georgia is ninth in the nation in terms of defense spending, so areas with major military installations will receive a boost from the $85 billion increase in the Defense Department budget. Communities in Muscogee, Liberty, Richmond, Chatham and Houston counties will benefit the most, as will defense contractors throughout the state, Ayers said.

And while Georgia’s existing home prices are 14 percent higher than their pre-recession peak overall, the degree of appreciation varies within the state.

Overall, both the state and nation will enjoy positive economies throughout 2019, he said.

“Absent a full-blown trade war, the risk of a 2019 recession is low,” Ayers said. “And if we can avoid a major shock or policy mistakes, the current expansion could continue for some time.”