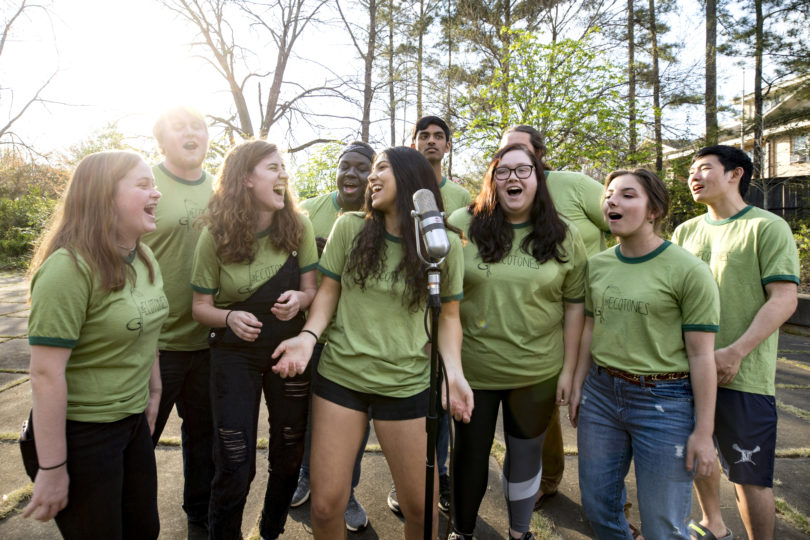 The Ecotones’ next performance will be April 27 at 7 p.m. at the Chapel. (Photo by Dorothy Kozlowski)

In nature, an ecotone is a transitional zone between two ecological communities. And for members of the Ecotones, UGA’s a cappella group of ecologically-minded students, music and the environment also come together in unexpected ways.

“Like the name suggests, we are the buffer between music and environmental activism,” said Samuel Lee, co-musical director. “It’s being able to have your cake and eat it, too. I can be part of a group that loves music while taking care of the environment.”

Founded in 2010 by a group of graduate students in ecology who shared a love of singing, the group now stands at 11 members.

“It combines two things I’m passionate about separately. I’ve loved to sing for a long time, and I’m also involved in environmental activism—reducing, reusing and recycling,” said Connor Lawhead, co-musical director. “Finding an organization that combines these two seemingly very different things into one cohesive element drew me to it.”

True to its roots

While the founders all studied ecology, the current members are majoring in a wide variety of areas. Lawhead is a third-year psychology/sociology double major with an emphasis in neuroscience, and Lee is a fourth-year microbiology major.

But the group stays true to its roots. Members regularly volunteer with the Upper Oconee Watershed Network doing river sampling. The data on the health of the river then goes to researchers at UGA and the Centers for Disease Control and Prevention. They also regularly sample Tanyard Creek.

Other members work with UGArden or with the UGA Chew Crew, an effort of the Office of Sustainability to stop the spread of invasive plants by using a herd of goats to manage the land.

The Ecotones also donate 20% of ticket sales to the Upper Oconee Watershed Network. Their next concert, Ecopella, will be at 7 p.m. April 27 at the Chapel. Tickets are $7 ($5 for students) at the door, and they accept cash and cards.

They perform several times each semester. In fact, last year was the group’s first time at the International Championship of Collegiate A Cappella where they reached the quarterfinals.

“At that level, the music is so incredible,” Lee said. “It was a really enjoyable experience.”

Mixing up the music

The sound of the Ecotones has shifted over the years. At its beginning, there was more folk music in the repertoire. Now, the group performs more R&B and pop music.

“Songs with that R&B and pop influence are often more intricate and complicated. It can be a little more interesting to listen to because of all the parts,” Lawhead said. “As our abilities have progressed, so have our song choices.”

Lawhead said he’s looking forward to the group’s interpretation of Bruno Mars’ “24K Magic” while Lee is partial to the group’s version of Adele’s “When We Were Young,” which he arranged. They said that they value diversity in everything, especially musical selection.

The group elects new musical directors at the end of each academic year. They recruit students to audition at the Division of Student Affairs’ Involvement Fair and on social media. After a quick interview and technical tests involving musical scales and call-and-response, where a musician plays a couple of notes that the singer repeats, they perform two solos in contrasting styles—a verse and chorus each—for the entire group. At callbacks, those auditioning learn a song from the group and then perform it with them and then for them. Lee said they’re specifically looking for how well auditionees can blend their sound with others.

Lee said music “has always been a presence” in his life. He played the cello for 13 years and wanted to find a way to still have music in his life at UGA. Lawhead said music serves as an outlet and form of catharsis for him, and he knows it can be beneficial to others.

“It not only does something for you, but it also multiplies the happiness for other people listening,” Lee said.