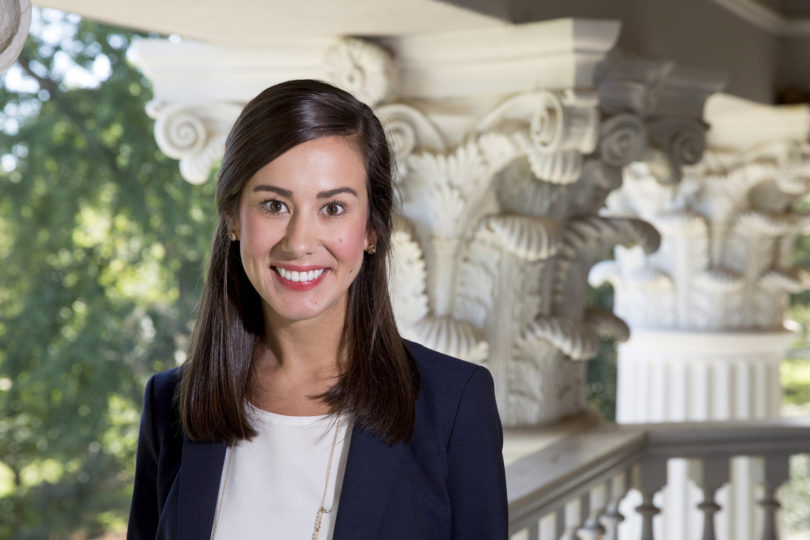 Director of Development and Alumni Relations

That’s the distance she has traveled—from Macon to Athens to Nashville back to Athens—for her education. Along the way, she has earned two degrees and now is working on her third.

Growing up in Macon, Gaughf said she was very fortunate to attend Mount de Sales Academy, but outside of meeting with the school’s college counselor, she didn’t have much guidance about the college application process. She mostly navigated the process by herself.

“In many ways, I identified as a first-generation college student because neither of my parents had completed college while I was growing up,” said Gaughf, director of development and alumni relations for the College of Education. “My dad attended some college and my mom eventually completed her bachelor’s degree in communication. But she did it one class at a time over 20 years while juggling a career, marriage and raising two children.”

Though Gaughf had never set foot on UGA’s campus before enrolling, it was the only school to which she applied.

“For financial reasons, I needed to stay in state to utilize the HOPE Scholarship, and I wanted a well-rounded, liberal arts education so that choice was very simple,” she said. “I applied for early admission to UGA, was accepted and never looked back.”

Her service as an ambassador on the Arch Society, as a tour leader for the UGA Visitors Center and as a study-abroad student in South Africa inspired Gaughf to pursue a career dedicated to advancing academia.

“I became dedicated to the pursuit of postsecondary education,” she said. “I’m also interested in the different ways of financing that education for students and for the university.”

After receiving her master’s degree in higher education administration at Vanderbilt University, she returned to UGA to both work and continue her education.

In her professional role, Gaughf is responsible for managing the development and alumni relations arm in the College of Education with specific focus on obtaining major gifts of at least $25,000 for the College of Education. Those financial gifts, which allow the college to focus on its priorities, are the result of relationships Gaughf builds with prospective donors.

“I listen to their desires and interests and simply connect them with opportunities to make their impact on the College of Education,” she said. “Working with donors isn’t so much a process as it occurs very naturally. I’m passionate about education, and so are they. We have a lot of common ground.

“Private philanthropy has become an ideal means of helping postsecondary education grow,” she also said. “With those gifts, we can offer more access and opportunities to faculty and students.”

When Gaughf isn’t in class or in the office, she enjoys spending time outdoors where she likely can be found going on a walk or run in Athens.

“Walking and running around allow me to see what’s going on and get exercise at the same time,” she said. “There are many beautiful, hidden neighborhoods in town that I love to explore.”

“I enjoy playing softball recreationally,” she said. “I also enjoy going to Major League Baseball parks. It’s my goal to go to all 30 MLB parks; I’ve seen eight of the stadiums so far.”

After completing her doctorate, Gaughf plans to continue advancing postsecondary education and remain in a collegiate environment.

Though handling a demanding schedule, Gaughf enjoys being able to do what she loves both at work and in the classroom.

“I’m not doing just a job, but working in tandem with the university’s mission,” she said. “I wouldn’t be able to work on something I didn’t believe in. I see tremendous benefits for postsecondary education and it is my passion to increase access for students with financial need.”