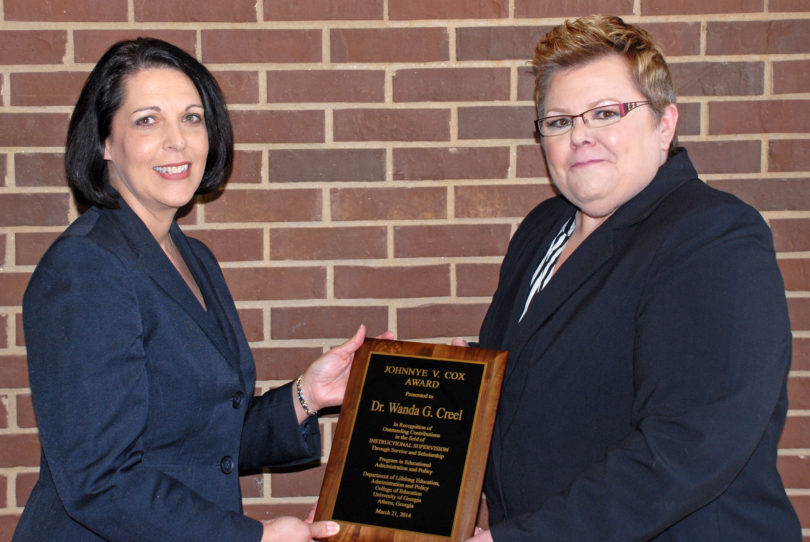 Creel, an experienced educator, researcher and administrator at the local and state levels, has been Barrow County school superintendent since 2010. During her 20-year career in education, she has served as state associate superintendent for school improvement, assistant superintendent for teaching and learning for Houston County Schools, and director of elementary education for Coweta County Schools. She has been an elementary school principal, middle school assistant principal, middle and high school teacher and adjunct professor for graduate educational leadership.

The Johnnye V. Cox award was named for the late COE professor who joined the UGA faculty in 1946 and developed the college’s program of supervision. She was considered one of the preeminent national trailblazers of the field.

Pethel is the assistant superintendent for leadership development for Gwinnett County Public Schools, the largest district in Georgia with more than 162,000 students. Pethel directs the activities of the Quality-Plus Leader Academy and the Wallace Foundation’s Principal Pipeline Initiative. The QPLA’s programs include the Aspiring Principal Program, Aspiring Leader Program, District Leader Program, Just-in-Time Training for school leaders, the Leader Mentor Program and the district’s annual Summer Leadership Conference. He also wrote and directed a successful school leadership grant with the Broad Foundation. In addition, Pethel coordinates the Race to the Top initiative for the school district, including all work related to teacher and leader evaluation. He previously served as the chief human resources officer for Gwinnett County Schools.

Before joining the Gwinnett school system, Pethel served as the executive director of Human Resources for the St. Johns County School District in St. Augustine, Fla. He has worked as a teacher, assistant principal and principal. He has served as an adjunct professor at Emory University, Georgia State University and UGA. He has also worked extensively with assessment centers over a 20-year period and led training in a number of states and for the Department of Defense Dependent Schools.

UCEA’s Excellence in Leadership Award recognizes practicing school administrators who have made significant contributions to the improvement of administrator preparation. UCEA is a consortium of major research universities with doctoral programs in educational leadership and policy.