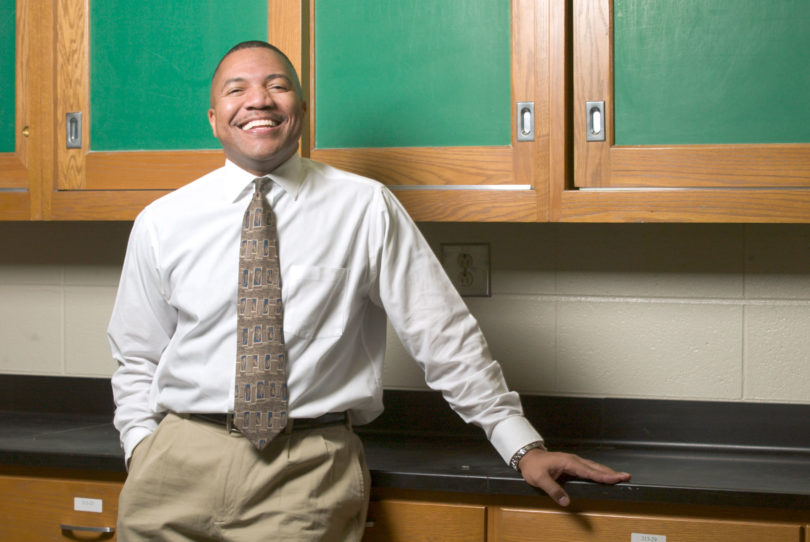 Malcolm Butler's current research focuses on how to influence teachers to use science in the classroom. He is also studying how cultural issues such as race

Growing up in south Louisiana as the youngest of 10 children, Malcolm Butler was encouraged not only by his parents but also by his older brothers and sisters to take education seriously.

“School became a part of who I was-it was a place I needed to be,” says Butler, who was one of three first-generation college graduates in his family.

In school, Butler found that he liked science and became intrigued by looking at logical ways to solve problems. The opportunity for a physics scholarship in college encouraged him to pursue science, first as an undergraduate and then as a graduate student. During his graduate work, Butler decided to focus more on science education.

“I was fortunate enough to get involved in an after-school program for African-American children and I became excited about working with children and seeing them get excited about science in a way that made sense to them,” he says.

After toying with the idea of working in education, Butler decided to combine his love for science with helping educate students.

“Whether students are going to be the next Einstein or a street magician, there is some level of science that is important in all of these children’s lives,” he says. “I want to see how to make the science connect with the students.”

Butler’s current research interests feed into how to influence teachers to use science in the classroom. One project Butler is currently working on is called “Writing to Learn,” which focuses on what teachers are doing in writing and how that can be used to support what is happening in science.

Another research area for Butler centers on issues of culture. Whether it is race, ethnicity or gender, he is looking at how “difference” issues affect science teaching and learning.

Each summer, Butler also teaches a course on the Georgia coast for teachers and teacher educators. The class investigates marine science issues in Brunswick, Sapelo and several other barrier islands.

As an assistant professor of education at Texas A&M-Corpus Christi, Butler was named one of the “Top 40 Under 40” by the Corpus Christi Caller-Times in 1998. That same year he also received the Outstanding Young Men of America award and the Corpus Christi District United Methodist Church Discipleship Award. Yet Butler still considers his highest accomplishment to be achieving his Ph.D.

“Look at my family background and history and it wouldn’t be expected that I would earn that degree,” he says. “Not only is receiving a Ph.D. my academic high, but it is also a personal high. I recognize that if it had not been for my family when I was growing up, along with my wife and my son, I would not have been able to achieve what I have.”