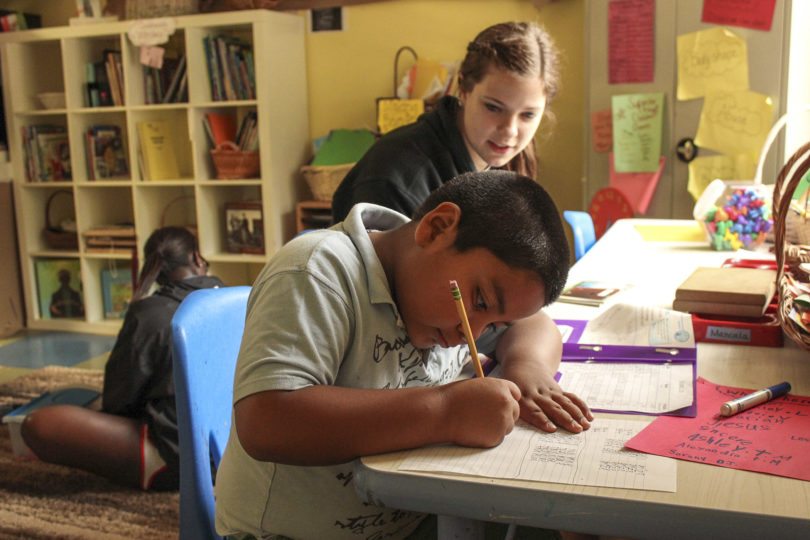 Jesus Mendoza works on his homework with help from Kate Browne

An after-school program launched by a UGA professor is beginning its second full academic year of serving children in a West Athens neighborhood.

Stephanie Jones, a professor in the College of Education, started the program in the summer of 2013, implementing it after a six-month incubation period. The space was home to the Boys and Girls Clubs of Athens, which hosted programs in the three-bedroom rental house but consolidated its West Athens programming to a different location in January 2013. The owner of the Garnett Ridge neighborhood then contacted Jones, whose research focuses on poverty and its role in education, about hosting an after-school and summer program in the unoccupied space.

The Awesome Clubhouse also serves as a teaching tool for Jones and other professors, offering an on-site location for UGA students to learn about early childhood education.

“This is one of our only places where we are embedded in a neighborhood,” Jones said. “The children have so much power and autonomy here, so the students can see them in ways they won’t see them in schools.”

The idea, Jones said, is to give children a place to come and be creative while subtly guiding them toward a strong sense of self and learning. Open shelves and baskets hold items for play. By encouraging children to explore and pull out what they need, Jones said, it’s helping them be creative with what they find. Then it’s up to Jones and the dozen or so UGA early childhood education students to cultivate that curiosity by asking questions and encouraging unstructured play.

“There’s a lot of research that tells us that when we create a curriculum out of a child’s interests, they have a really high level of success,” Jones said. “It’s cultivating curiosity, creativity and a sense of power.”

The Awesome Clubhouse is funded by Jones’ workshop “The Other Side of Poverty,” which helps educators better address the needs of students coming from poor backgrounds. The College of Education’s Dean’s Office also provides program support. And a core partnership with the Food Bank of Northeast Georgia helps provide an array of snacks and site maintenance. Other UGA professors host enrichment programs such as an art club, a “Storybook Chefs” program linking literacy and food and a Saturday morning early childhood education program.