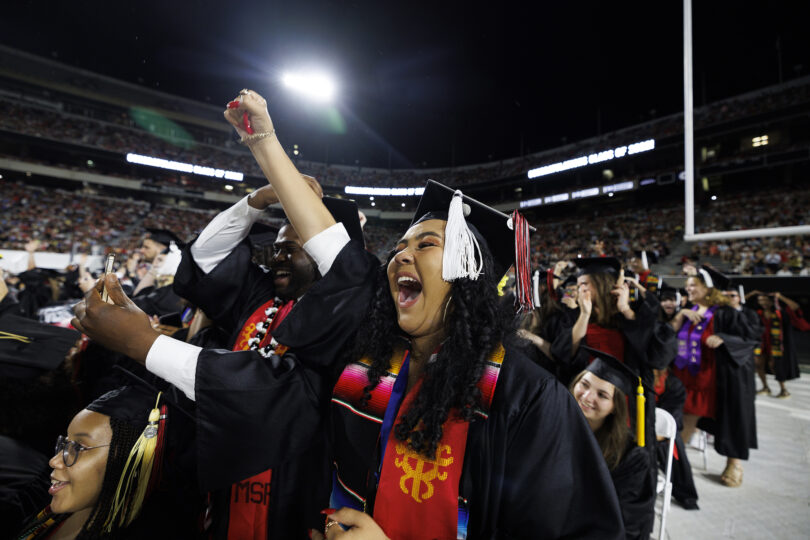 Graduate Emelynn Arroyave celebrates after turning her tassel as the SPIA degrees are conferred during the undergraduate Commencement ceremony in Sanford Stadium. (Photo by Andrew Davis Tucker/UGA)

Emelynn Arroyave was dead set on getting out of Georgia after high school graduation. She grew up in Dacula, and was hoping to go someplace different than her home state. “I wanted to go to New York or maybe Boston,” she said. “I had this idea that I could go somewhere new and be a new person.” 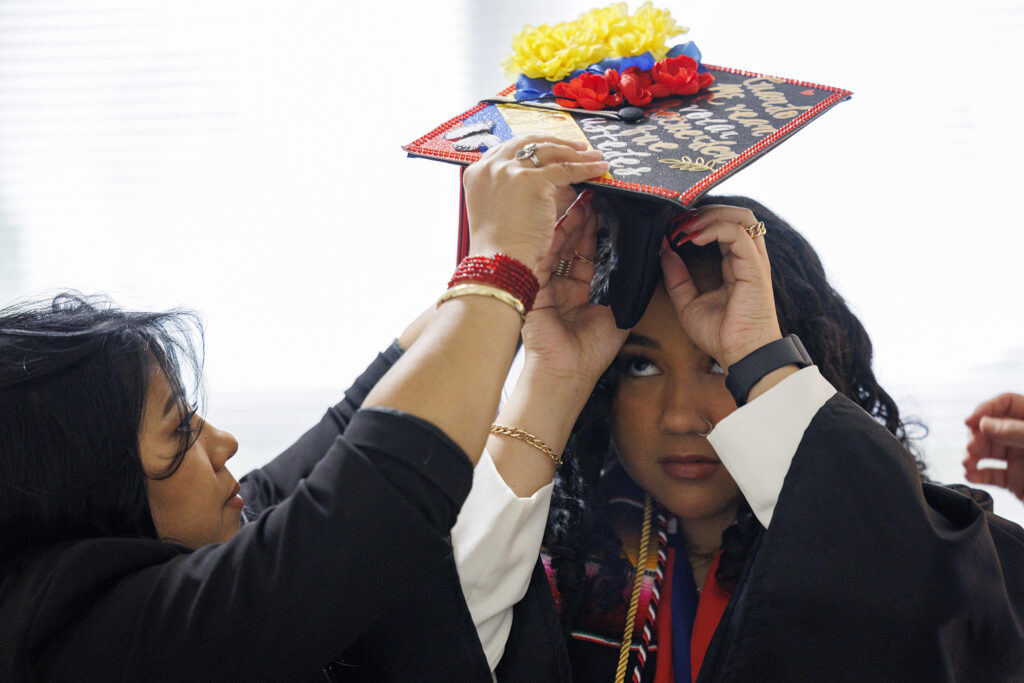 Ingrid Lopez helps her daughter Emelynn Arroyave put on her graduation cap in her apartment on Commencement Day. (Photo by Andrew Davis Tucker/UGA)

But with several scholarships on hand, including the Zell Miller Scholarship, staying close to home made the most financial sense. Arroyave, a first-generation student, embraced the University of Georgia by deciding to go outside of her comfort zone and get involved in as many different organizations as she could. She went so far as to make an Excel sheet with all of the options that interested her, then narrowed these down and started getting involved.

“I thought I wouldn’t find my place in such a big school. But the community at UGA really does make a big school feel small,” she said.

The place where she found the greatest sense of purpose and affinity turned out to be the Hispanic Student Association. “Getting close to this amazing and inspiring group of people had a huge impact on me,” she said. 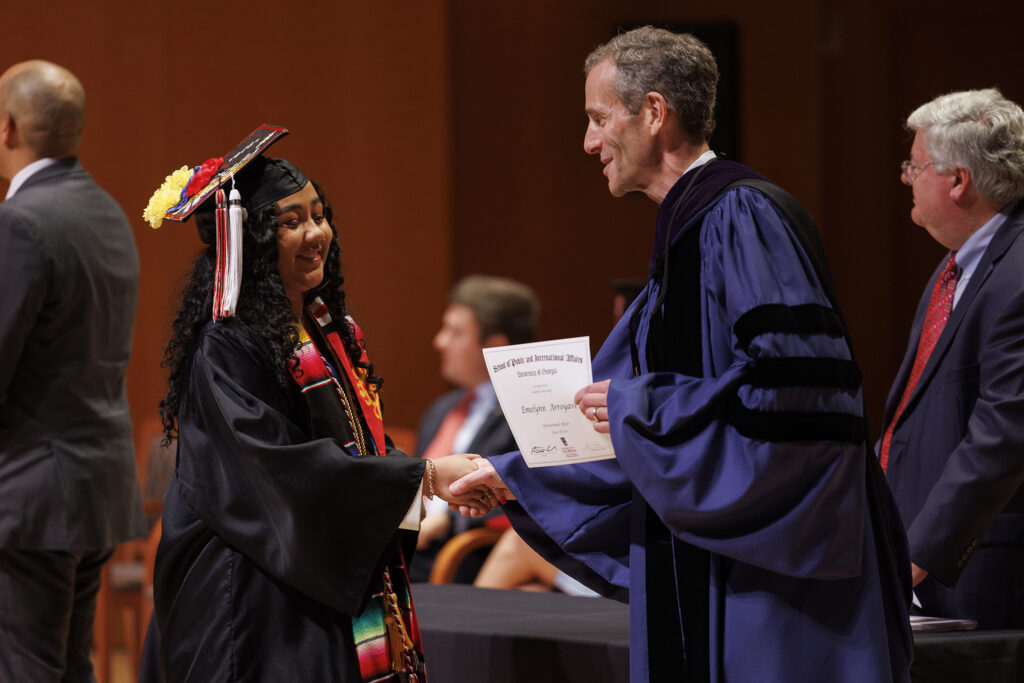 As this year’s president, Arroyave was on hand to help organize and host the association’s own graduation celebration, which took place last week. She also helped secure the speaker, Maria Canals Barrera, a Disney actress best known for her role as the mother on “The Wizards of Waverly Place,” a show Arroyave loved growing up.

Barrera gave a keynote speech in both English and Spanish. In fact, the entire event was bilingual. “A big part of that celebration is including families who don’t speak English,” said Arroyave, who also worked as a tour guide at the UGA Visitors Center. 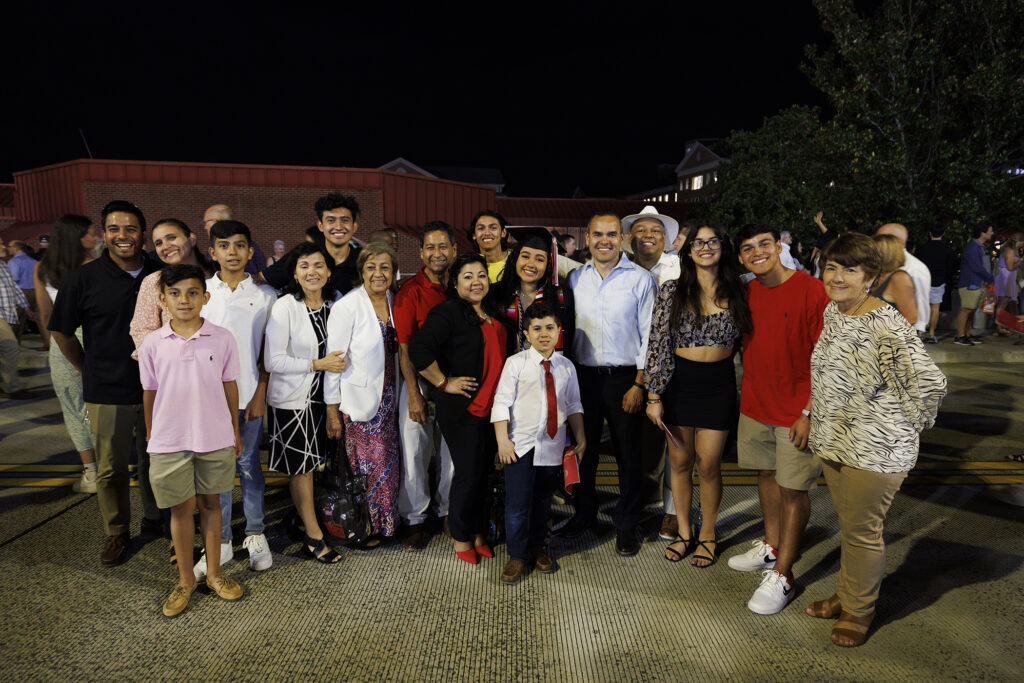 Graduate Emelynn Arroyave, middle, takes a family photo with her immediate and extended family that came to her graduation to celebrate her as the first college graduate in her family on the Sanford Drive Bridge after the undergraduate Commencement ceremony. (Photo by Andrew Davis Tucker/UGA)

Arroyave’s parents both grew up in Colombia and moved to the United States as teenagers. Arroyave went to a large high school where she didn’t relate to many people, but despite staying in her home state, she said she truly found a sense of belonging at UGA. “Finding community here made me do a complete 180, and now I can’t imagine myself anyplace else,” she said. This reversal is a big part of her talk when she gives campus tours, she said.

Now, thanks to several AP credits and a strong work ethic, Arroyave is set to graduate early with a degree in international affairs and a minor in social work. And she already has a job secured in communications at Public Citizen, a nonprofit consumer advocacy organization in Washington, D.C.

During the past month, she has been working remotely 30 hours a week while she finishes up school and finals. In 2023, she’ll move to D.C. and start working in person full time. “It’s been a bit stressful for the last few weeks balancing all of it,” she said, “but I am so grateful to have the opportunity.” 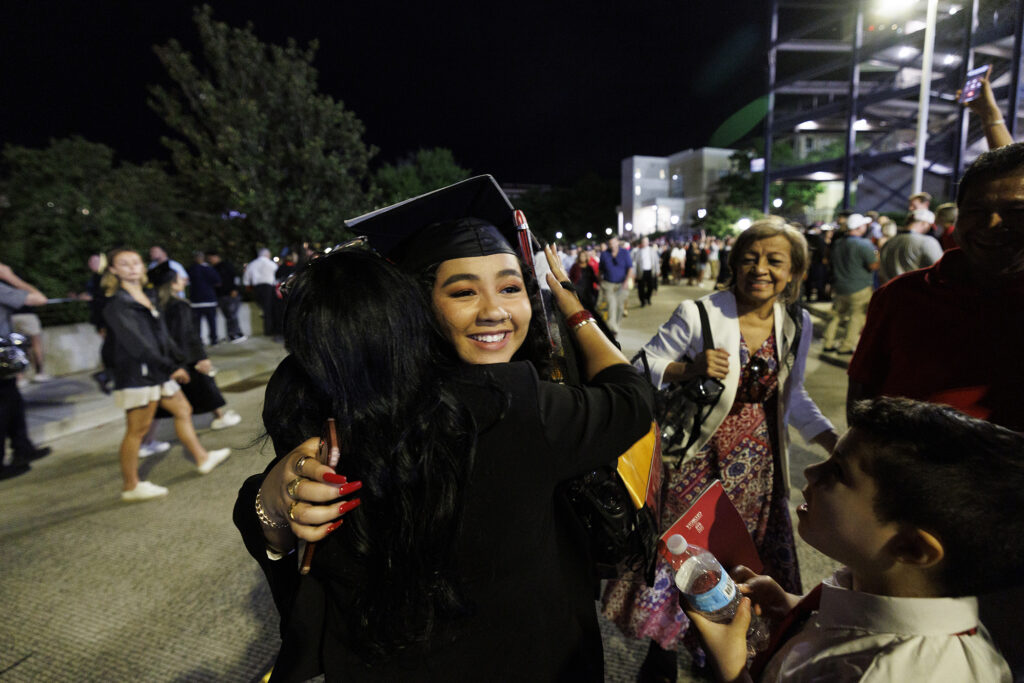 Ingrid Lopez hugs her daughter Emelynn Arroyave as they meet on the Sanford Bridge after the undergraduate Commencement ceremony. Arroyave is also greeted by her grandmother Maria Palomino, grandfather Libardo Lopez and brother Johan Lopez. (Photo by Andrew Davis Tucker/UGA)

Recently, Arroyave’s mom, Ingrid – a paralegal who works with Hispanic immigrants – attended one of her daughter’s UGA tours. “She was remarking how shy I used to be,” laughed Arroyave. “I really garnered my leadership qualities here. Having a support system behind me at UGA gave me the push I needed to get involved. The friends in the Hispanic Student Association have always cheered me on, and my family has been very supportive too.