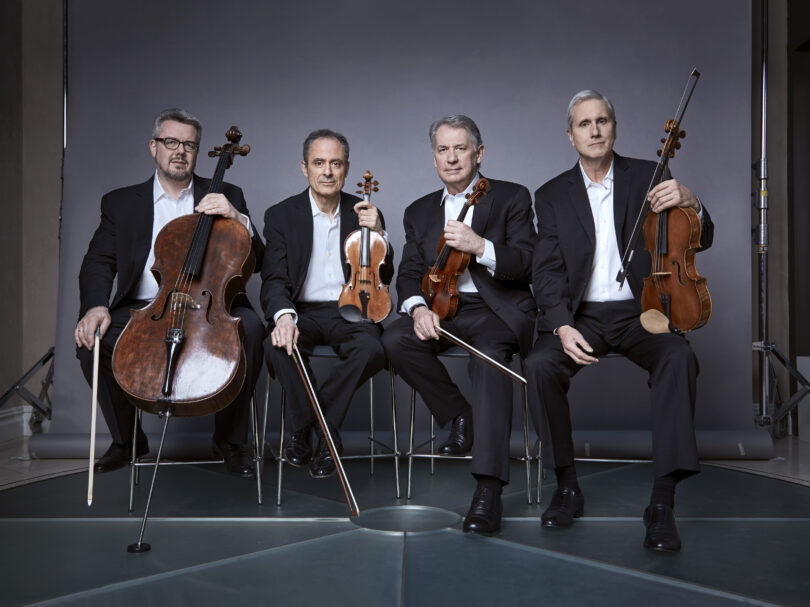 The Emerson String Quartet is one of the world’s leading chamber ensembles. Honored with nine Grammy Awards over the course of more than four decades, the group is now on its farewell tour.

On Jan. 10 at 7:30 p.m., the Emerson String Quartet appears at the Hodgson Concert Hall with an all-Beethoven program featuring one of the composer’s towering achievements, the Grosse Fuge, or Great Fugue.

Audiences, critics and the record-buying public have all acknowledged the group’s mastery. Founded in 1976 and based in New York, the quartet was one of the first to have its violinists rotate in and out of playing the first violin part, often in the same concert — as will be the case in Athens. Philip Setzer is in the first chair for Beethoven’s Op. 59, No. 2, “Razumovsky.” Eugene Drucker moves into the seat for Op. 130, with its original finale, the Grosse Fuge. The violist is Lawrence Dutton, who joined in 1977, and the cellist is Paul Watkins, who joined in 2013.

“With musicians like this,” wrote a reviewer for The Times (London), “there must be some hope for humanity.” The quartet has made more than 30 acclaimed recordings and has been honored with three Gramophone Awards, the Avery Fisher Prize and Musical America’s Ensemble of the Year award. The group has partnered in performance with such stellar soloists as Renée Fleming, Barbara Hannigan, Evgeny Kissin, Emanuel Ax and Yefim Bronfman, to name a few.

The quartet’s extensive discography includes the complete string quartets of Beethoven, Mendelssohn, Brahms, Bartók, Webern and Shostakovich, as well as multi-CD sets of the major works of Haydn, Mozart, Schubert and Dvořák. In 2018, Deutsche Grammophon issued a box of the Emerson Complete Recordings on the label. In October 2020, the group released a recording of Schumann’s three string quartets for the Pentatone label. In the preceding year, the Quartet joined forces with Grammy-winning pianist Evgeny Kissin to release a collaborative album for Deutsche Grammophon, recorded live at a sold-out Carnegie Hall concert in 2018.

The quartet, which takes its name from the American poet and philosopher Ralph Waldo Emerson, balances busy performing careers with a commitment to teaching, and serves as Quartet-in-Residence at Stony Brook University. They will conduct masterclasses for students in UGA’s Hugh Hodgson School of Music.

The quartet’s members hold honorary doctorates from Middlebury College, the College of Wooster, Bard College and the University of Hartford. In January 2015, the quartet received the Richard J. Bogomolny National Service Award, Chamber Music America’s highest honor, in recognition of its significant and lasting contribution to the chamber music field.

There is a pre-performance talk about the Emerson Quartet program in Ramsey Concert Hall at 2:15 p.m. Admission is free.