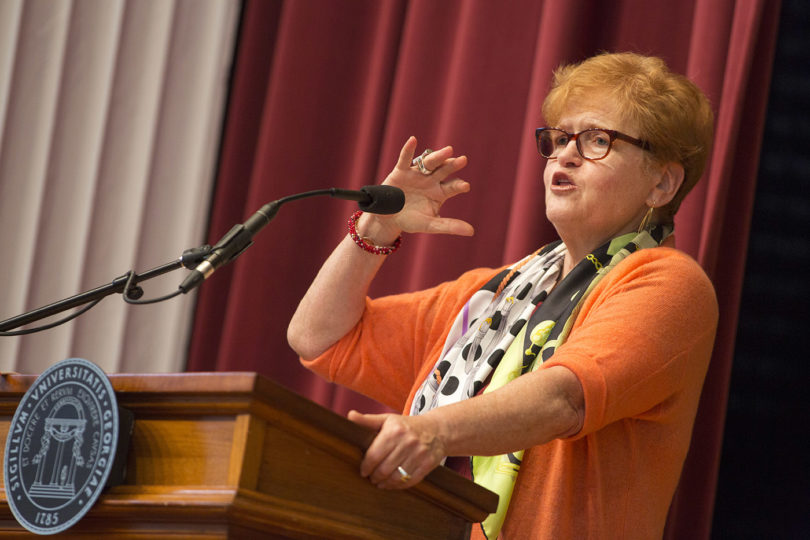 Deborah Lipstadt, a professor from Emory University, condemned the misuse of the Nazi genocide for political purposes during a lecture at the Chapel last month (Watch the lecture at https://www.youtube.com/watch?v=PdUq0tKGEAs).

“We have to be careful about our language,” said Lipstadt, Emory’s Dorot Professor of Modern Jewish History and Holocaust Studies. “We have to draw lessons from the past, but be careful about using it for our own particular political or social goals.”

Lipstadt referred to several national and international politicians and public figures who in recent weeks espoused historically inaccurate statements about the Holocaust to score political points.

Lipstadt, author of Denying the Holocaust: The Growing Assault on Truth and The Memory and the Eichmann Trial, delivered the University Lecture Oct. 22.

In her lecture, Lipstadt traced America’s consciousness about the genocide by examining works in academia, the news media and popular culture over the decades after the war. She concluded that current events influenced how Americans understood the Holocaust.

“Our memory is very much shaped by the contemporary experience,” she said.

In the years immediately following World War II, America seemed to have little interest or understanding about the Holocaust, Lipstadt said. That started to change in the 1960s during the trial of Adolf Eichmann.

Eichmann was a German Nazi SS officer responsible for the deportation and extermination of more than 1 million Jews. Israeli agents captured the fugitive Eichmann in Argentina in 1960 and put him on trial for crimes against Jewish people. Eichmann would be convicted and executed.

The trial raised international interest in the Nazi genocide, Lipstadt said. Throughout the 1960s and 1970s, popular culture and academia began to pay more attention to the Holocaust. During that tumultuous political period in the U.S., Lipstadt said, writers and filmmakers “used the Holocaust and the Nazis to shed light on American society.”

There have been positive lessons that America has taken from its confrontation with the Holocaust, she said, including U.S. intervention in other genocides through U.N. peacekeeping forces. Lipstadt told the audience that if there was one lesson to take away from her lecture, it is that the world must act early to prevent genocide.

“If you want to stop evil,” she said, “you’ve got to stop it before it becomes real evil.”