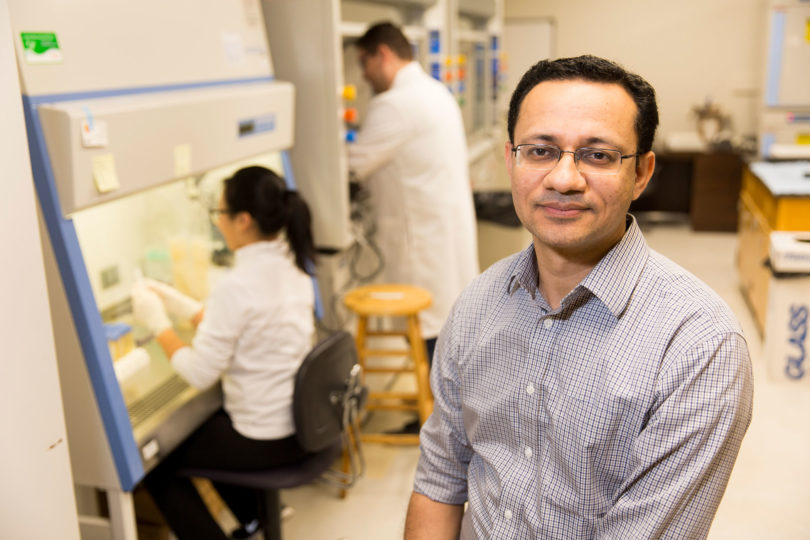 Implantable medical devices such as central venous catheters, stents, endotracheal tubes and vascular grafts are vital tools in today’s health care arsenal. Yet these devices designed to help us recover from illness and injury often lead to serious and even deadly complications including infection and thrombosis.

Hitesh Handa, an assistant professor in the UGA College of Engineering, is working to make medical devices safer by creating a new generation of biocompatible coatings.

“Infections and clotting are big issues with medical devices,” said Handa. “For example, treatment of these infections often includes antibiotics and other antimicrobial agents, such as silver. However, these materials often fail to prevent the infection, and there is a growing concern about their use due to the emergence of bacterial resistance to antibiotics and antimicrobial agents.”

Complications from medical implants lead to extended hospital stays, higher medical costs, increased discomfort for patients and even death. The Centers for Disease Control and Prevention estimates 100,000 people in the U.S. die each year from health care-acquired infections.

At UGA’s Riverbend Research Laboratories, Handa is developing biocompatible medical device coatings that incorporate nitric oxide. A gas produced by the body, nitric oxide is a potent antimicrobial agent and an accelerant in wound healing. It’s released in arteries and veins to help prevent blood from clotting. Sinuses release the gas to fight off infection when we have a cold.

“Basically, what we are trying to do is mimic what the bodies does,” said Handa.

In addition to next-generation medical device coatings, Handa is working to create wound dressings that prevent infection and promote healing by releasing nitric oxide. He’s also working with a colleague at the U.S. Department of Veterans Affairs on a microfluidic artificial lung, a device that patients can wear like a backpack while awaiting a lung transplant. Other projects include the creation of antimicrobial packaging materials for hospital applications and the use of nitric oxide to combat the growth of potentially dangerous biofilm on medical implants.

Handa received a highly competitive Career Development Award from the National Institutes for Health for his work on nitric oxide-releasing medical coatings. His work also has attracted funding from the Department of Veterans Affairs, the CDC and industry partners. He and his research team have published 14 articles and filed two patent applications in the past two years.

Handa first became aware of the potential benefits of nitric oxide in medical settings while working as a researcher with a biomedical startup company in Ann Arbor, Michigan. He later joined the surgery department at the University of Michigan Medical School as a research faculty member.

“I had an engineering background and I had experience in industry, but I needed experience working directly with physicians and surgeons to understand the real problems that biomedical engineers need to solve,” said Handa, who joined UGA in 2015 as the first hire made by the College of Engineering’s new dean, Donald Leo.

A UGA Lilly Teaching Fellow, Handa leads a biomaterials course for undergraduate and graduate students. His experience working with physicians, surgeons and industry collaborators provides firsthand knowledge of the challenges faced by the health care industry that he shares with students.