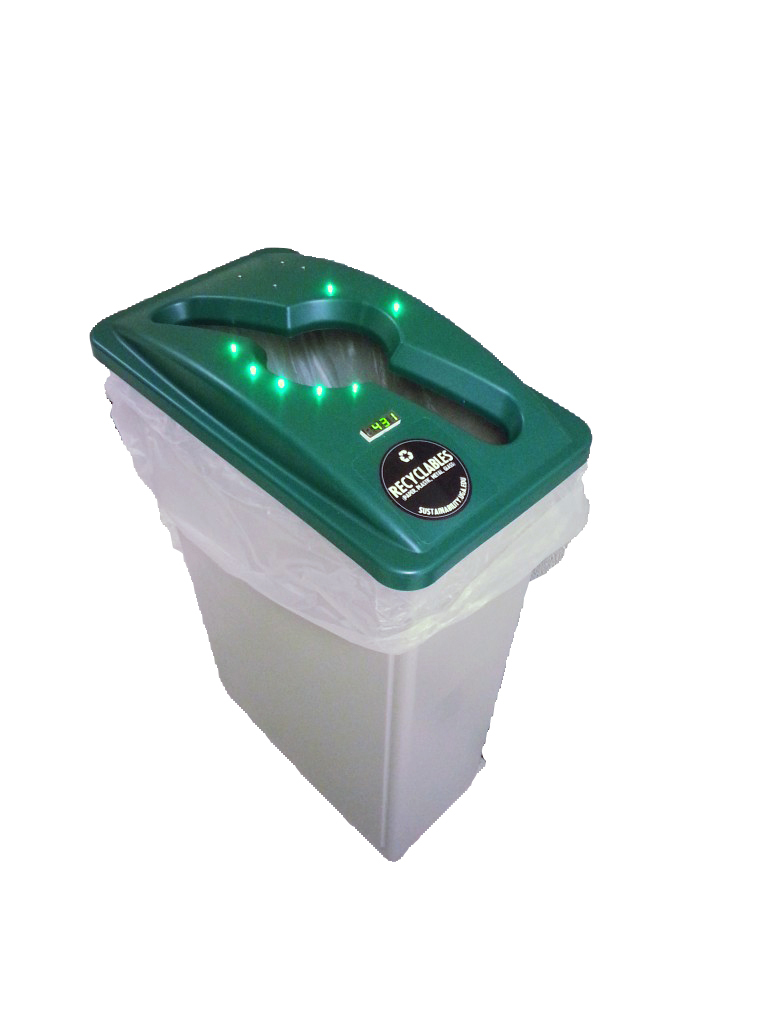 Fitbits, a wearable electronic device that measures a person’s activity, are on the rise due to their interactive nature and ease of use. Two UGA College of Engineering professors have taken the Fitbit concept and applied it to recycling with their WeRecycle bin.

“When you’re active with a Fitbit, the device smiles at you,” said Jenna Jambeck, an associate professor in the College of Engineering. “You get automatic feedback for doing something good. We used the same kind of idea when creating WeRecycle.”

By using lights and sounds as well as counting the number of items recycled, the creators of WeRecycle have developed a rewarding and entertaining device to encourage recycling.

In the last few years, the three have created a WeRecycle bin prototype as well as created their own registered LLC for the product.

The prototype uses the existing recycling bins on UGA’s campus, adding handmade circuitry and lights to their lids.

“We did this to reduce both the cost and the materials used,” Jambeck said. “We didn’t want to create something that was unnecessarily using extra resources.”

Because the WeRecycle device is battery powered, it potentially could function for years before the batteries need to be changed. They also could be recharged by the sun if the device is outside.

“All electronics are tucked away under the lid, so changing the bag is easy and shipping the lid is all that is necessary because we use standard ‘slim jim’ bins,” Johnsen said.

While not yet on the market, WeRecycle already has been tested in the halls of the Driftmier Engineering Center.

“We saw that students were coming up and recycling multiple things at once,” Jambeck said. “The bin’s lights naturally attract people to come over and see what it does.”

The bin is intended to help address the international problem of recycling, which is that only 30 percent of proper materials are recycled.

“We don’t properly value the cost of the entire life-cycle of our products,” Johnsen said. “When we recycle, we keep track of these products and can control when, where and how they are disposed. Extracting any remaining value of a product is vital because the energy source that enables the creation and transport of most of these products is nonrenewable.”

Already with their WeRecycle LLC, Jambeck and Johnsen have created a website, a mobile app and social media accounts. Once the product is on the market, user data can be tracked using these features.

“We want to be the leaders in sustainable recycling, where we optimize the ‘point of contact’ with the consumer, so that the bins reach their full performance,” Johnsen said.

Jambeck and Johnsen said that before going on the market, the bin needs to harvest renewable resources around itself, detect what’s going into it, reduce “false positives” of items and provide more feedback about what’s being recycled.

While the bin still is being developed, Jambeck is hopeful that the product will one day be on the market.

“So far we’ve done a Kickstarter and applied for a grant,” she said. “Right now, the bin isn’t available beyond our prototype. We’re hoping that will change in the near future.”