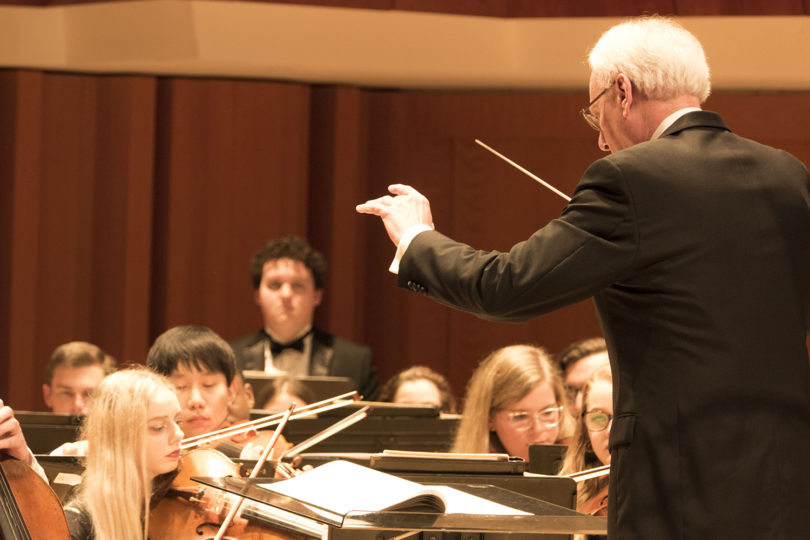 The next installment of the Ensemble Series takes place March 2 at 7:30 p.m. in Hodgson Concert Hall and features the University of Georgia Symphony Orchestra.

The Hugh Hodgson School of Music in UGA’s Franklin College of Arts and Sciences will feature the University of Georgia Symphony Orchestra in the next installment of the school’s Ensemble Series.

The performance will be held in Hugh Hodgson Concert Hall in the Performing Arts Center March 2 at 7:30 p.m.

The concert will open with Jubilation by celebrated American composer Ellen Zwillich. Commissioned by the University of Georgia for the opening of the Performing Arts Center, a world-premiere performance of the work was led by guest conductor Yoel Levi in April 1996.

Second on the program is Sergei Prokofiev’s Romeo and Juliet, which premiered in 1940. Originally written as music for the full-length ballet, Prokofiev arranged important musical sections into three orchestral suites; the UGASO will perform the first and second of the suites.

The performance will conclude with Franz Schubert’s Symphony No. 3 in D major, which was composed in 1815, a very productive year for Schubert as it was the same year he wrote his famous Erlkonig.

Tickets are $12 for adults and $6 for students. They can be purchased online at pac.uga.edu or by calling the Performing Arts Center at 706-542-4400. All proceeds go directly to supporting student scholarships.

For those unable to attend the concert, live streaming will be available online at music.uga.edu/live-streaming.