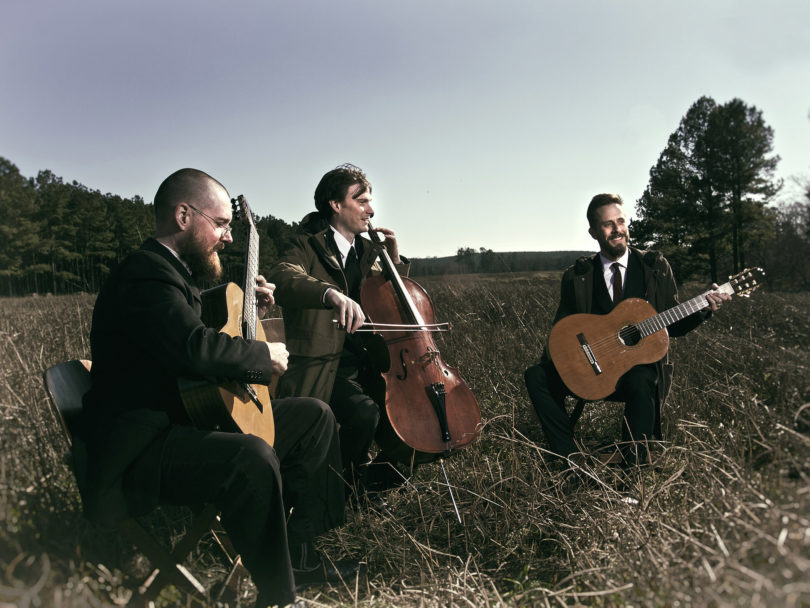 Revien is a trio of UGA Hugh Hodgson School of Music graduates. Kyle Dawkins and Brian Smith alternate between guitars and electronics

Tickets are $18 each or $5 with a UGA student ID and are available at pac.uga.edu, by calling 706-542-4400 or by visiting the Performing Arts Center box office.

Leading off the concert is Revien, a trio of UGA Hugh Hodgson School of Music graduates. Kyle Dawkins and Brian Smith alternate between guitars and electronics and Phil Snyder, assistant professor of guitar at the School of Music, plays cello.

“Though I am the classical guitar professor at UGA, I perform cello with this trio,” Snyder said. “Cello was my first instrument as a child, but I picked up the guitar as a teenager, so both instruments are close to my heart.”

Dawkins, Smith and Snyder are also members of the Georgia Guitar Quartet, a group with a 20-year history and roots at the School of Music, having been formed under the guidance of former guitar professor John Sutherland.

Revien, in keeping with the theme of the concert, approaches the idea of the chamber ensemble in a different way. Works from Bach and Mendelssohn find their way into their setlists just as easily as music by bands like Portishead or Grizzly Bear. As they describe it, “the trio embraces the classical repertoire and draws from the energy of rock and pop music as well.”

MOD[ular] Ensemble performs the second half of the program. Formed in spring 2014 by the School of Music’s Josh Bynum and Connie Frigo, associate professors of trombone and saxophone, respectively, the ensemble is dedicated to the creation of new works in unique, mixed chamber settings.

“The core instrumentation is clarinet, saxophone, trombone, piano and percussion and is modified according to the imaginations of individual composers we commission and the performers with whom we would like the opportunity to play,” Frigo said.

MOD[ular] Ensemble’s commitment to new music is evidenced by its program for the night: three world premieres of works commissioned specifically for this concert. Written by School of Music faculty member Peter Van Zandt Lane, DMA student Fernando Deddos and recent DMA graduate John Hennecken, each composition has, at its core, the spirit of exploration and originality that informs the ensemble itself.