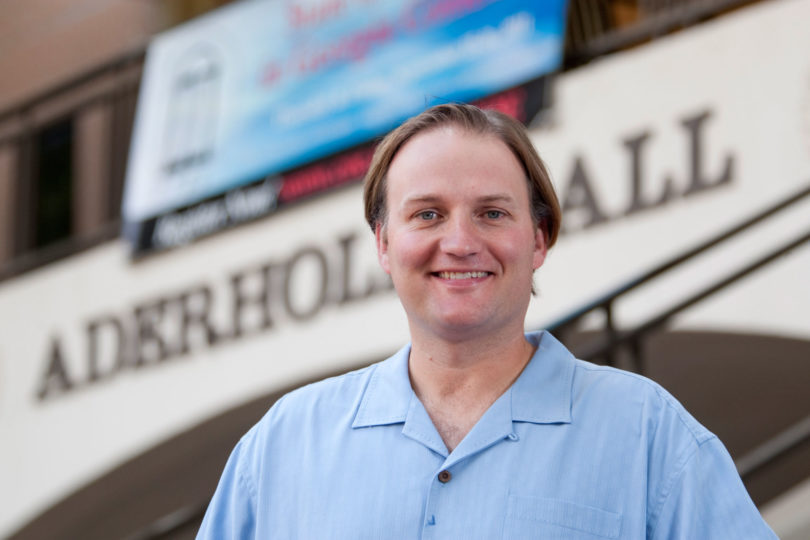 Mark Vagle challenges his students to ignore assumptions that other may hold about adolescents—such as that they are inattentive—and instead to be encouraging and self-reflexive teachers.

“I try to teach my students to see kids as possibilities rather than problems,” said Vagle.

His passion for teaching is contagious and transcending. It’s hardly surprising that Vagle received the College of Education’s D. Keith Osborn Award for Teaching Excellence in 2010.

However, Vagle didn’t always see himself as the motivational educator that he is now.

He didn’t accept his calling as a teacher until after a few years at Concordia College. Along the way, his father tried to talk him out of it and he attempted to pursue other careers. But Vagle’s desire to teach overpowered those uncertainties.

After teaching elementary and middle school students for six years in Minnetonka, Minn., Vagle served for two years as an assistant principal at Community Middle School in Plainsboro, N.J. In 2002, he moved back to complete his doctoral degree at the University of Minnesota and soon after joined the faculty at UGA.

Vagle’s research concentrates on pedagogy, phenomenological ­philosophies and research methodologies, and teacher education. He also serves on the college’s Research Advisory Board.

One of his most recent projects, The CLASSroom Project @ UGA, was developed with his colleague Stephanie Jones, an associate professor and graduate coordinator in the department of elementary and social studies education.

The project’s first initiative was a workshop entitled “The Other Side of Poverty in Schools.” The popular workshop for Georgia K-8 teachers, administrators, counselors and teacher educators focuses on more effective teaching practices to reach children from poor and working class families. The first workshop was held in July 2010 and has been offered five times since.

Specific goals of the workshop include getting participants to scrutinize the policies and practices at their schools and to re-think how they could be more sensitive to social class issues, and how their curriculum could deal more explicitly with social and working class issues.

For example, Vagle said that using literature that features characters from poor and working class backgrounds could enable discussions among students, faculty and principals on important topics and issues related to their own and their students’ experiences.

Vagle is now working on a new book scheduled for release in spring 2012. It will be a composition of research, critiques and arguments from himself and other scholars that confront the limiting idea of stage developmentalism serving as the sole explanation of how adolescents grow and change.

When asked to identify his most profound discovery as a researcher, Vagle said, “. . . the more I research, the more questions I have.”

This supports one of his guiding pedagogical mantras, a quote from education philosopher John Dewey that reads, “In a few people, intellectual curiosity is so insatiable that nothing will discourage it, but in most its edge is easily dulled and blunted. Bacon’s saying that we must become as little children in order to enter the kingdom of science is at once a reminder of the open-minded and flexible wonder of childhood and the ease with which this endowment is lost. . . With respect then to curiosity, the teacher has usually more to learn than to teach.”