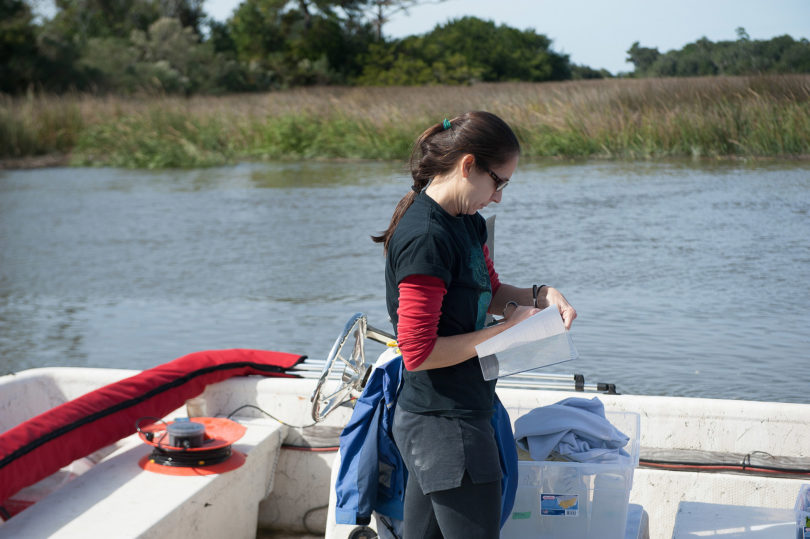 For most people, washing clothes, dishes and even their hands are a daily practice in good hygiene. To Erin Lipp, these common behaviors can be a threat to coastal ecosystems and the people who live near them.

As a 2015-2016 Public Service and Outreach Faculty Fellow, Lipp and her students study how products containing triclosan, an antibacterial ingredient found often in soaps, cosmetics and some plastics, affect the salt marsh along the Georgia coast.

They are looking at whether estuarine bacteria, especially Vibrio, which are a growing cause of disease in humans, may be resistant to this ingredient, a problem similar to antibiotic resistance. As triclosan enters the estuary from discharged wastewater, it could allow increased growth of resistant bacteria, which could mean an increased risk of exposure to these pathogens for people who are in the water or who eat shellfish that live there.

“We’re concerned that they could be developing resistance to the (antibacterial ingredients), which could potentially increase the risk of (people) being exposed to pathogens in marine waters,” said Lipp, a professor of environmental health science in the College of Public Health.

The work Lipp is doing in conjunction with Marine Extension is valuable to Brunswick-Glynn County, said Mark Ryals, superintendent of the Waste Water Treatment Plant Operations Division for the consolidated city-county government.

It is important that the county educate residents about the consequences of flushing products containing chemicals down their toilets.

“We want to get that word out as much as possible,” Ryals said.

On a cold fall morning last year, Lipp and her students, including Keri Lydon, a 2015-2016 Public Service and Outreach graduate assistant, left on skiffs from a boat landing in Brunswick to collect samples of water from the tidal creeks that connect to the Frederica River, near a wastewater treatment plant.

On the boat, they checked the temperature, salinity and pH for each tube of water collected, which was then capped, documented and stored for later processing. They also collected sediment from the creek bottom. Samples of water and sediment were collected above and below the wastewater treatment plant, and near the point where water is discharged into the river.

Back at the lab in Brunswick, Lipp and the students did the initial processing of the water and sediment. At one table, water dripped through a filter, where the bacteria would collect, a process that took hours to complete. Once collected the researchers sequenced the DNA for the entire community of bacteria to identify changes in the types and levels of bacteria that were present. This helped them understand how the changes were related to their proximity to the wastewater treatment plant and compared those findings to the data on the levels of triclosan in water from the same area.

Nearby, another of Lipp’s students used a vacuum pump to filter bacteria onto membranes attached to agar, a jelly-like substance that held the membranes in place and allowed the bacteria to grow overnight. The next day, the team counted the bacterial colonies on the membrane to determine the number of Vibrio and compared those numbers to the concentration of triclosan in the corresponding sediment and water sample. They also looked for fecal matter, which indicates the influence of wastewater in the sample and could mean a higher presence of triclosan.