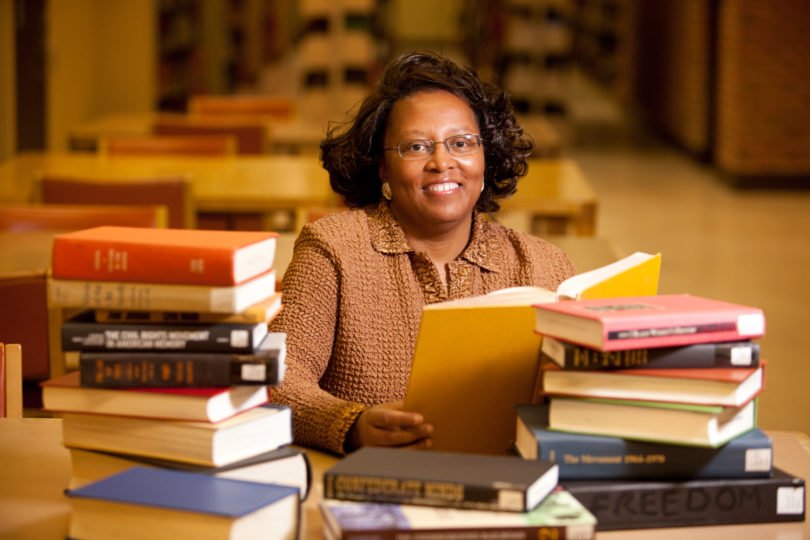 Athens, Ga. – Barbara McCaskill, an associate professor of English at the University of Georgia, will speak on “The Rise and Fall of William and Ellen Craft, Fugitives from Slavery in Georgia” May 18 at 3 p.m. in the Richard B. Russell Building Special Collections Libraries.

Based on her recent book from UGA Press, “Love, Liberation, and Escaping Slavery: William and Ellen Craft in Cultural Memory,” McCaskill’s talk will be followed by a reception and book signing. The event is open free to the public.

“Love, Liberation, and Escaping Slavery” is McCaskill’s fourth scholarly book. She also is co-director of the Civil Rights Digital Library Initiative and the Georgia Projects co-director of People Not Property.

The 1848 escape of William and Ellen Craft (1824-1900; 1826-1891) from slavery in Macon is a dramatic story in the annals of American history. Ellen, who could pass for white, disguised herself as a gentleman slaveholder; William accompanied her as his “master’s” devoted slave valet. Both traveled openly by train, steamship and carriage to arrive in free Philadelphia on Christmas Day.

In “Love, Liberation, and Escaping Slavery,” McCaskill revisits this dual escape and examines the collaborations and partnerships that characterized the Crafts’ activism for the next 30 years: in Boston, where they were on the run again after the passage of the 1850 Fugitive Slave Law; in England; and in Reconstruction-era Georgia. McCaskill also provides a close reading of the Crafts’ only book, their memoir, “Running a Thousand Miles for Freedom,” published in 1860.

“As this study of key moments in the Crafts’ public lives argues, the early print archive-newspapers, periodicals, pamphlets, legal documents-fills gaps in their story by providing insight into how they navigated the challenges of freedom as reformers and educators, and it discloses the trans-Atlantic British and American audiences’ changing reactions to them,” said Lisa Bayer, director of the UGA Press. “By discussing such events as the 1878 court case that placed William’s character and reputation on trial, this book also invites readers to reconsider the Crafts’ triumphal story as one that is messy, unresolved and bittersweet. An important episode in African-American literature, history and culture, this will be essential reading for teachers and students of the slave narrative genre and the trans-Atlantic anti-slavery movement and for researchers investigating early American print culture.”