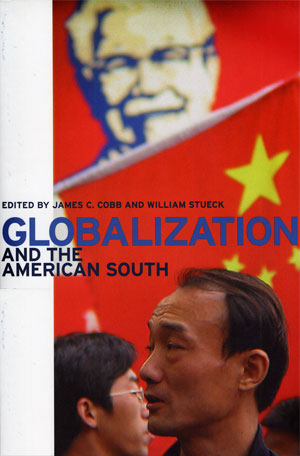 In 1955 Fortune magazine’s list of America’s largest corporations included just 18 with headquarters in the Southeast. By 2002 the number had grown to 123. In fact, the South attracted more than half of the foreign businesses drawn to the United States in the 1990s.

The eight essays in Globalization and the American South consider this dynamism in ways that help readers see anew the region’s place in that ever-accelerating, transnational flow of people, capital and technology known collectively as “globalization.” The book is edited by UGA history professors James Cobb and William Stueck.

Moving between local and global perspectives, the essays discuss how places like Latin ­America, Asia, Africa and the Indian subcontinent are now having an impact on the South. One essay, for example, looks at issues behind the explosive growth of North Carolina’s Latino population, which grew by almost 400 percent during the 1990s. Showing that global forces are often on both sides of the matchup-reshaping the South but also adapting to and exploiting its peculiarities-many of the essays make the point that, although the new ethnic food section at the local Winn Dixie is one manifestation of globalization, so is the export of such Southern phenomena as NASCAR and Kentucky Fried Chicken.