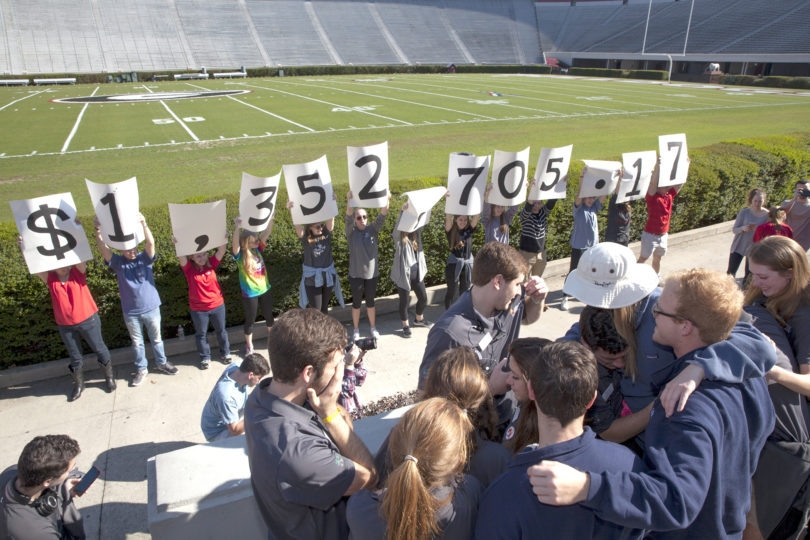 Students celebrate the announcement of UGA Miracle's 2017 contribution of $1

More than 3,000 UGA students gathered in Sanford Stadium Feb. 19 to celebrate a record-setting $1,352,705.17 raised for Children’s Healthcare of Atlanta.

This is the second year in a row that UGA Miracle, the university’s largest student-run philanthropy, has achieved a seven-figure fundraising total.

Beginning at 10 a.m. on Feb. 18 and lasting until the same time Feb. 19, the entire Tate Student Center was filled with students, faculty and staff for Miracle’s annual Dance Marathon. Throughout the night, participants danced, enjoyed live music, and took pictures with Hairy Dawg and the Aflac duck.

More than 60 of the “Miracle children,” Children’s Healthcare patients who interact with Miracle’s student members during the year and their families were in attendance, 35 of whom took the stage one at a time throughout the night to share their inspirational stories.

Kathryn Youngs, Miracle’s internal director, said Miracle is part of a philanthropic tradition that is a “blessing about being a University of Georgia student.”

“The culture here of giving back is a huge emphasis,” she said. “When I first came to campus and saw the passion of the older students, that’s definitely something I wanted to strive to emulate.”

$352,705.17—every dollar raised above $1 million—will support the Aflac Cancer and Blood Disorders Center of Children’s Healthcare of Atlanta, specifically fellowships for oncology fellows at Emory University.

“How amazing to think that former Miracle members, who are students in that program now, could be one of those fellows one day,” said Caroline Brown, Miracle’s marketing director.

This was the 22nd annual Dance Marathon. The 24-hour event is a symbolic gesture in support of children who had to sacrifice much more of their own time to combat illness in hospitals.

Since its inception, Miracle has raised more than $7 million for Children’s Healthcare—$3 million of that total from the last three years.

UGA Miracle offered several events throughout the past year, including the annual Doughnut Dare 5K and a $100 Day and More than 4 Percent Day, which raised more than $262,000 and $56,000, respectively. Greek Life organizations were responsible for nearly $1 million of the total.

“This is just one example of how our students impact the world in incredible ways before they even leave campus,” Wilson said. “Just imagine what they will achieve in the future. I can’t wait to see.”