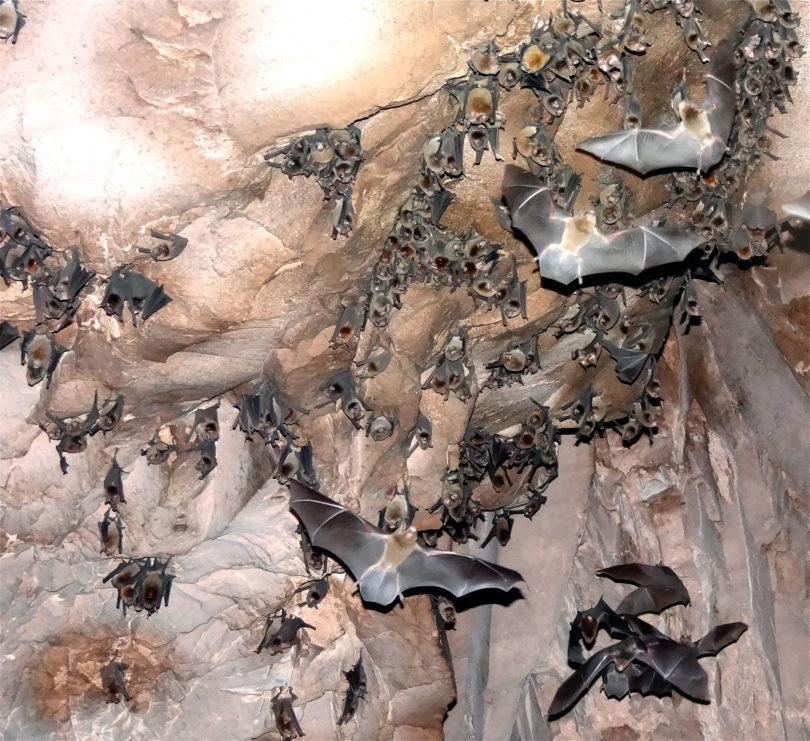 Several insectivorous and frugivorus bat species fly around and roost together in an abandoned tunnel in Peru. "Mixed-species bat roosts like this one in Peru provide opportunities for virus transmission between bat species

Athens, Ga. – The number of genetic mutations that follow host shifts in rabies virus impacts the speed of disease emergence in new host species, according to new research by ecologists at the University of Georgia and the U.S. Centers for Disease Control and Prevention.

The findings, published in the Proceedings of the National Academy of Sciences, offer the first empirical evidence of the theory that host shifts should happen faster if they involve fewer evolutionary changes. The research could eventually help inform strategies to control novel diseases and understand which viruses are most likely to jump between species.

Many infectious diseases-influenza and HIV, for example-are caused by viruses transmitted from one species to another, posing threats to human, livestock and wildlife health. The impacts of such diseases are magnified when they establish a foothold and persist in new host species-but why some viruses like HIV succeed whereas others disappear after a single outbreak is a major unknown.

Understanding how viruses adapt to new host species is key to answering this question. Daniel Streicker, a postdoctoral associate in the UGA Odum School of Ecology and the study’s lead author, approached the question by looking at the evolutionary changes in the genome of a virus as it repeatedly jumped into new species.

Streicker studies rabies in New World bats, which he described as a wonderful system for exploring what a virus needs to do to establish itself in a new host.

“Rabies virus is really specialized to each bat species, particularly in the American bat community-nearly every bat species we’ve looked at so far has its own genetically distinct virus,” he said. “But there’s a lot of transmission going on between bat species. So the ecological opportunities for viral establishment are there, but for some reason, only rare transmission events establish an ongoing transmission cycle in a new bat species.”

Because rabies has successfully jumped between so many species, Streicker and his colleagues were able to compare changes to the viral genome across multiple host shifts.

“This study is truly novel because past work on host shifts focused on a single or just a few pathogen introduction events, whereas the analysis done here spanned many bat species and a large number of viral introductions, allowing us to search for repeatable patterns,” said Sonia Altizer, associate dean of the Odum School and one of the paper’s coauthors.

Using virus samples collected from diagnostic laboratories throughout the Americas, the researchers sequenced close to 80 percent of the genome from 30 different strains of rabies virus. “We looked at which changes, and how many, happened during that time period when the virus would have been adjusting itself to better infect each new bat species,” Streicker said.

They found that mutations were occurring in a gene that hadn’t been well studied but that is important for controlling the speed of viral replication.

“These changes might speed up or slow down replication in a way that fits well with the biology and ecology of the new host, allowing the virus to transmit before the host dies,” Streicker said. “In other words, evolution was more of a tinkerer than relying on drastic changes in how the virus interacts with its hosts.”

They also found that the genetic mutations weren’t the same across the host shifts they studied but instead varied in both the parts of the viral genome affected and the number of changes.

“We found that there are different evolutionary pathways to the same goal, with that goal being establishing in a new bat species,” Streicker said. “And that may be important because the more changes that happened in the viral genome, the longer it took for the virus to establish in the new host species.”

One implication of the team’s findings is that it will be very hard to predict the evolutionary changes that will occur in future host shifts based on past events, at least in bat rabies. This means that a shift that happened easily with just a few changes in the past might happen much more slowly and through a different evolutionary pathway in the future.

“We’re not yet able to suggest any particular factor as predictive, but we’re establishing that there does seem to be a relationship between the number of changes and how quickly a shift happens,” Streicker said.

Understanding what determines the number of changes needed could eventually inform efforts to anticipate the origins and control the impacts of newly emerging diseases.

“If a lot of changes are required, then we might guess that a host shift is unlikely to happen at all, or if it does, we could have time to intervene medically in the new host population,” Streicker said. “But if very few changes are required, and if that initial transmission event happens, we might be out of luck.”

The paper’s coauthors are Altizer as well as Andrés Velasco-Villa and Charles E. Rupprecht of the Poxvirus and Rabies Branch of the CDC. Support for the research was provided by UGA and the National Science Foundation.