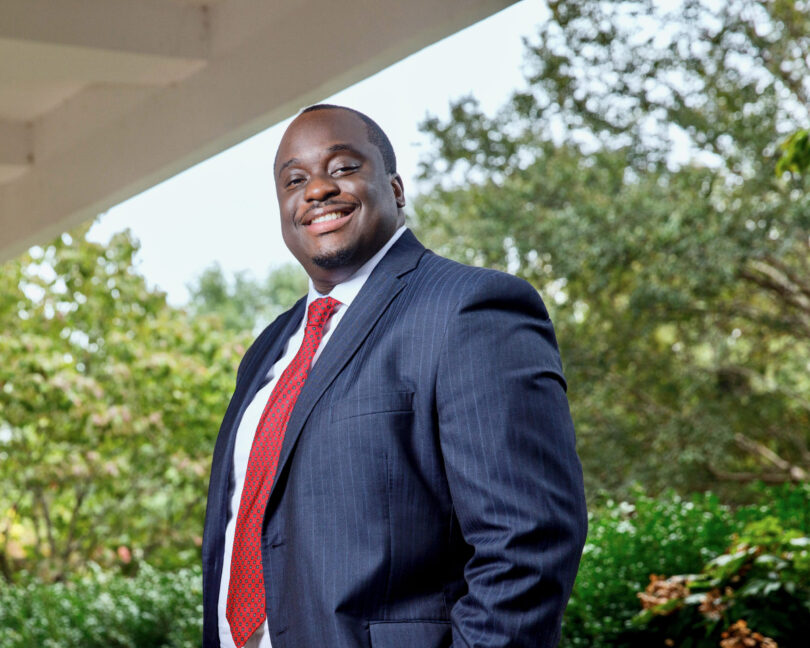 Ewan Cobran is an assistant professor in the College of Pharmacy's clinical and administrative pharmacy department. (Peter Frey/UGA)

Just by looking at Ewan Cobran’s curriculum vitae, one would assume the young assistant professor in the College of Pharmacy is motivated by prestigious grants and awards, invited national and international speaking engagements and selection into advanced honorary programs across the country.

That assumption would be wrong.

Instead, Cobran is driven by the memory of his beloved grandparents, Edith and Llyod Powell, farmers in rural Jamaica who instilled in him a passion for service and giving back to others. Because of this humble, yet noble doctrine, along with his grandparents’ untimely deaths within months of each other due to late-diagnosed cancers, he committed his scholarship and research to improving the lives of others, specifically in the areas of medically underserved populations and cancer disparities.

A native of Kingston, Jamaica, Cobran was raised as a young child by his grandparents while his parents immigrated to the United States for work and education. Later, when he moved to the U.S. to be with his parents and siblings, Cobran always clung to his roots and the influences of his grandparents, with whom he remained close. In fall 2008, his grandfather died of prostate cancer, and just five months later, his grandmother succumbed to stage 4 breast cancer.

“Coping with my grandparents’ late diagnoses, consecutive deaths and funerals provoked me to dig into the cyclical process of the lack of prevention, lack of treatment, lack of support and lack of appropriate diagnoses, which result in preventable deaths for many minorities,” explained Cobran. “After the second funeral, I realized that I wanted my scholarship to actively help eliminate obstacles for quality health care for minorities.”

He added, “I believe my personal history and cultural awareness shaped my approach toward the study of prostate cancer disparities and drove me to investigate the impact of ethnicity, nativity, community, familial health experiences and religion on patterns of care, access to early prevention and barriers to early cancer detection and treatment.”

Fast forward more than 10 years since the death of his grandparents, and it is apparent that Cobran has put his plan into action. As an example, Cobran, who joined the faculty in the college’s Department of Clinical and Administrative Pharmacy in 2014, was the recent recipient of a National Institutes of Health/National Cancer Institute grant of almost $1 million that will allow him to explore how minority and low-income men, especially in rural areas, with localized prostate cancer and their caregivers can comprehend genetic technology and testing for the disease. His strategy will be to create easy-to-understand learning videos to communicate the importance and value of genetics and genetic technology in combating this disease.

Cobran considers teaching to be an opportunity to give back to others, as well. He has developed or co-developed such courses as Pharmacoepidemiology; Pharmacy and the United States Health Care System; Research Methods in Pharmacy Administration; and Pharmaceutical Health Services, Outcomes, and Policy. By imparting his scholarship and wisdom about health disparities, Cobran is confident that the work he is doing will continue. Asked about his teaching philosophy, Cobran said he listens to students—and he tries to make the complex simple.

“I treat my students as colleagues. We are all on the same intellectual level, so there are no right or wrong answers; just topics for further exploration and discussion,” he said.

Cobran’s work is being recognized on the national and international levels. As one colleague said, “Ewan is on the trajectory to be one of our national leaders in prostate cancer research.” He was a 2020 Harvard Medical School Research Methods in Supportive Oncology Scholar; a 2019 and 2017 scholar in the National Cancer Institute Cancer Prevention Fellowship Program; a 2019-2021 Georgia Clinical and Translational Science Alliance, KL2 Mentored Clinical and Translational Research Scholar; the inaugural 2019 Recipient of the Jonice A. Louden Young Investigator Award from the African-Caribbean Cancer Consortium; and a participant in the  Lilly Teaching Fellowship from the UGA Center for Teaching Learning (2017-2019).

“Dr. Cobran is making significant advancements in the critical areas of health disparities and underserved populations in Georgia’s rural communities,” said Henry Young, the interim department head for Clinical and Administrative Pharmacy. “His commitment to his scholarship and his work in prostate cancer will make a difference in the lives of Georgians.”

His passion for service doesn’t stop in the research field or at the doors of the classroom. Cobran is vice president for faculty for the Black Faculty Staff Organization. Outside the Arch, and in memory of his grandparents, Cobran supports the lives of senior citizens as an active volunteer with the Athens Area Council on Aging. In fact, on a cold Saturday morning, just before Thanksgiving, Cobran was spotted directing traffic at a small church parking lot that was hosting the Council on Aging’s drive-through food distribution for needy seniors and families.

“There are people out there who are underserved and underrepresented,” said Cobran. “I know I can do something to help them— something to make a difference.”

Cobran can rest assured that his scholarship and research, along with his passion for serving others, has allowed him to answer this calling. And his fellow Georgians are all the better for it.