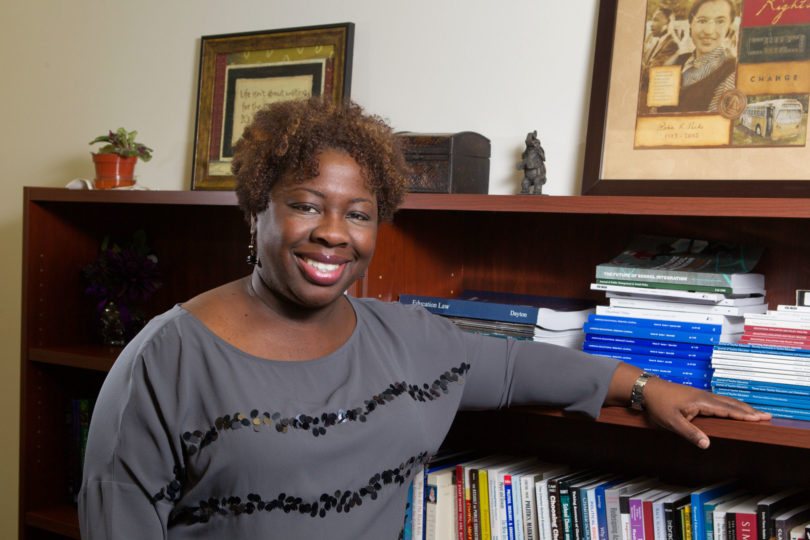 Sheneka Williams comes from a family of educators.

“My grandfather was the principal of a one-room school house, and my father and his brother also were educators,” Williams said. “I didn’t choose to become an educator, it chose me.”

Williams identifies herself as a professor, researcher and service worker. Her current research examines how school districts assign students to schools. Her study of schools in Wake County, N.C., with Eric Houck, a former College of Education colleague who is an associate professor at the University of North Carolina at Chapel Hill, made national news for exposing what appeared to be the end of a diversity policy that had been implemented on the basis of socio-economic status and student achievement.

Williams’ work strives to answer one question: How can students gain access to equitable education?

“When I look back after retirement, I hope that some students have received better opportunities because of the research I conducted that changed the way policymakers make decisions,” she said.

Williams said she feels she has a responsibility to ensure that a child, who does not choose his/her own ZIP code, is not penalized because of it either.

Williams began her career in education as a high school social studies teacher and debate coach in Tuscaloosa, Ala., County Schools for six years.

Williams credits her father with her transition from coaching the debate team to coaching education policymakers across the country. A former assistant school superintendent, her father gave her the idea that people had the power to make changes in the ways schools are governed and operated.

“I realized I wanted to be a professor and write about issues on a more macro level,” said Williams.

In 2009, she began a cross-sectional study that explored three urban school districts: Wake County, Jefferson County, Ky., and the city of Champaign, Ill. She presented her multi-district study in March 2012 at the National Press Club in Washington D.C.

For years, Wake County has been hailed as one of the best school districts in the country. This, in part, can be attributed to the district’s student assignment policy. The Wake County area, which is part of the Research Triangle in North Carolina, has the highest concentration of doctoral degree holders in the nation. This dynamic makes it possible for the district to develop a student assignment policy based on socio-economic status.

However, school board elections became more partisan, and the district’s decade-long diversity policy no longer stands. Williams’ study exposed the community conflict that had developed from the school board’s policies in Wake County and made national news. Countless political and social leaders went to Wake County to combat the efforts to remove the student assignment policy, notably Ben Jealous, head of the National Association for the Advancement of Colored People.

The study became a springboard for where her career is headed.

“In your career, you have those moments you know will propel you and your work to the next level,” she said. “Having the opportunity to present my work in a venue like the National Press Club and the publicity the work received, I felt, ‘I can really do this.’ ”

In Georgia, her research largely has focused on urban areas like DeKalb and Clayton counties, but she is expanding her work into the rural counties like Greene, Putnam and Sumter.