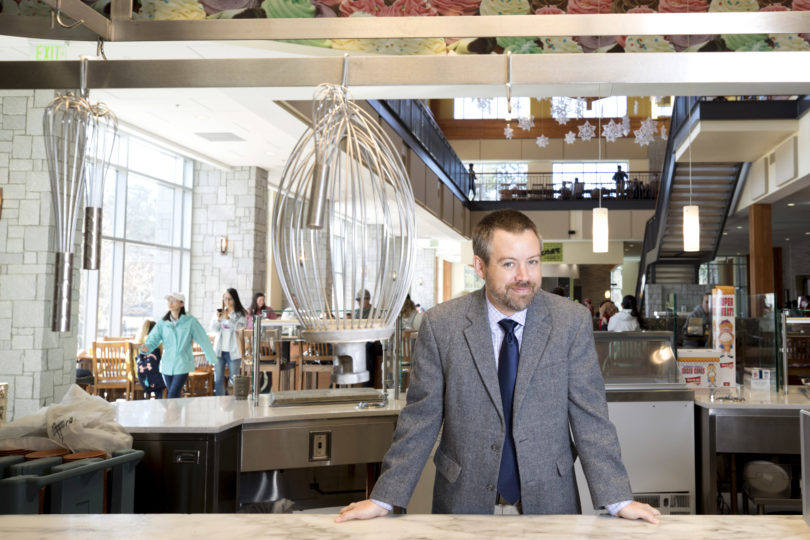 Bryan Varin’s days at UGA are never the same.

“I work with an incredible team,” he said. “There are always new and exciting projects on the horizon. We’re always focused on serving campus to the best of our abilities and putting students first. We have an incredible opportunity to serve UGA every day.” 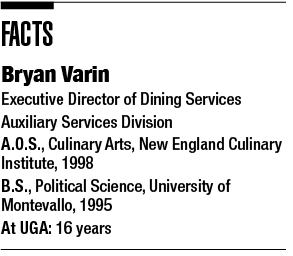 Serving campus is something Varin has done for the past 16 years. Initially hired as a training specialist, he worked his way up the ranks at Dining Services to become executive director in 2017.

“I found a home,” he said. “I’d been lots of other places before UGA, but then I landed here, and I’ve never looked back.”

Varin’s culinary career started when he was an undergraduate at the University of Montevallo. Because he needed a job—any job—Varin became the delivery driver for a pizza eatery. At the start of each shift, he had to slice a 50-pound bag of onions. After working there for about a year, his next job was as a waiter at a different restaurant. When an opening in that restaurant’s kitchen came up, he became a fry server. It was then that he knew he wanted to pursue a career in the culinary arts and restaurant industry.

All the while, Varin was pursuing an undergraduate degree in political science. His original plan after earning his bachelor’s degree was to go to law school or graduate school. Instead, he decided to go to culinary school because he had a passion for cooking. After graduating, he initially thought he would continue in the restaurant business. Instead, he took a job at the University of Washington as a chef.

Varin wanted to move back to the South to be closer to his home state of Alabama, so he applied to UGA. His first job at UGA was a training specialist in dining services before becoming the chef for campus catering and retail operations. He then spent time at Snelling Dining Commons as chef, then unit manager. In 2011, he was named the assistant director of meal plan operations before becoming associate director. In 2014, he was asked to serve as interim director, and in February 2017, he was promoted to executive director.

In addition to all five dining commons, Dining Services operates numerous retail self-branded and franchise restaurants on campus, which allows Dining Services to implement customer feedback from UGA students, faculty and staff. According to Varin, the department has approximately 1,100 employees and is one of the largest employers of students on campus.

In addition to his culinary skills, Varin has some musical chops. He plays bass for a bluegrass/Americana band called Border Hop with a group of his friends. They don’t perform as much as they used to, but a few years ago, Varin and his friends opened for the Del McCoury Band at the Georgia Theatre. Varin also plays the mandolin and the guitar.

For Varin, UGA is a special place because of the people.

“The people are the very best part of being at UGA,” he said. “We can’t do what we do without each other and our team. The team is first and foremost, and it’s about our efforts and how we support each other so we can support students, faculty and staff on campus.”