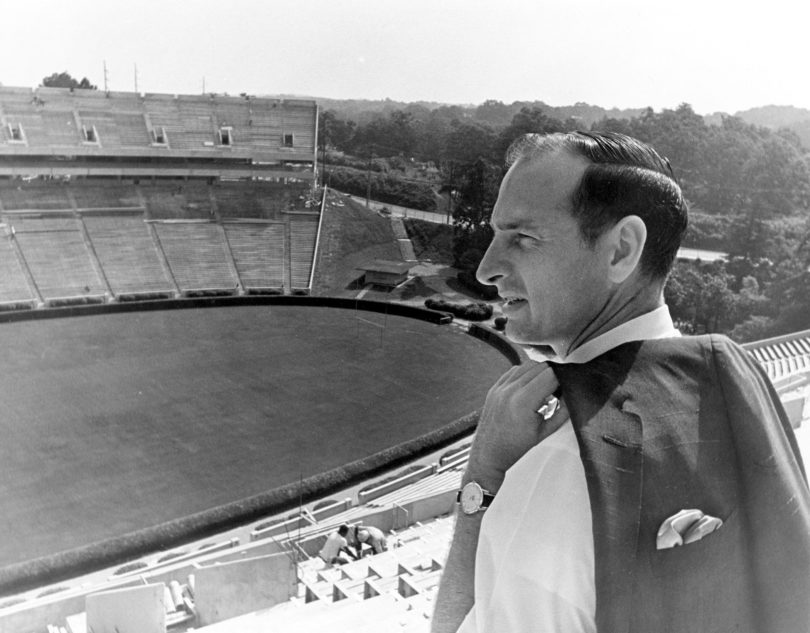 Photos, playbooks, original artwork by Jack Davis and commemorative items are among the memorabilia featured in Vince Dooley:A Retrospective, 1954-1988, which will be displayed through Dec. 15. The items are from the archives of the UGA Athletic Association, housed at university archives, a part of the special collections libraries.

Dooley’s last game, on Jan. 1, 1989, in the Gator Bowl against Michigan State, was his 201st victory. His final record as coach was 201 wins, 77 losses and 10 ties. He also won six SEC titles and one national championship.

At the time of his retirement, Dooley had the third most wins of any active college football coach. He served as athletic director, a position he held since 1979, until retiring in 2004.

The most visible change Dooley made to the UGA program upon his arrival in Athens was to redesign the uniform. He replaced the older style football uniform of a silver helmet, red jersey and silver “britches” with a more modern design of a red helmet with a black G set against a white background, red home game jersey or a white away game jersey and white pants. The silver britches would replace the white britches starting with the 1980 season. This look is, with only minor variation, the same uniform the football team wears today and has become one of the most recognized symbols of UGA.

A fixture in Athens for 50 years, Dooley made his mark early on. On Sept. 18, 1965, Dooley, in his second season as a head coach, led the Bulldogs in an upset victory over the defending national champion Alabama Crimson Tide, led by Paul “Bear” Bryant. The Crimson Tide had not lost a regular season game since Nov. 30, 1963. Though the Bulldogs ended the 1965 season with a record of six wins and four losses, they were poised to win the Southeastern Conference championship twice in the next three years.

In 1988, Dooley and his wife, Barbara, established the Dooley Library Endowment Fund with a personal gift of $100,000. Under his leadership, the fund raised more than $2.3 million.

“The breadth of his career is impressive, as is how successful he’s been in his endeavors both on and off the field,” said Jason Hasty of the Hargrett Rare Book and Manuscript Library who curated the exhibit. “Just as impressive, though, is how committed he is to education, his own continuing education and intellectual pursuits and, through the Vincent J. Dooley Library Endowment Fund, supporting the education of others.”

“I have had the good fortune of university life for some 60 years, combining both my time at Auburn University and the University of Georgia,” Dooley has said. “This lengthy academic environment has given me a real appreciation of the joy of learning.”

Dooley holds bachelor’s and master’s degrees in history. In addition to several football-related books, Dooley has written a book about gardening.

“A coach is first and foremost a teacher,” Dooley said, “and he must constantly strive to improve his teaching techniques.”

The Russell Special Collections Building is open free to the public weekdays from 8 a.m. to 5 p.m. and Saturdays (except on home football game days) from 1-5 p.m.

Parking is available in the adjacent Hull Street parking deck. More information is at http://t.uga.edu/RY.