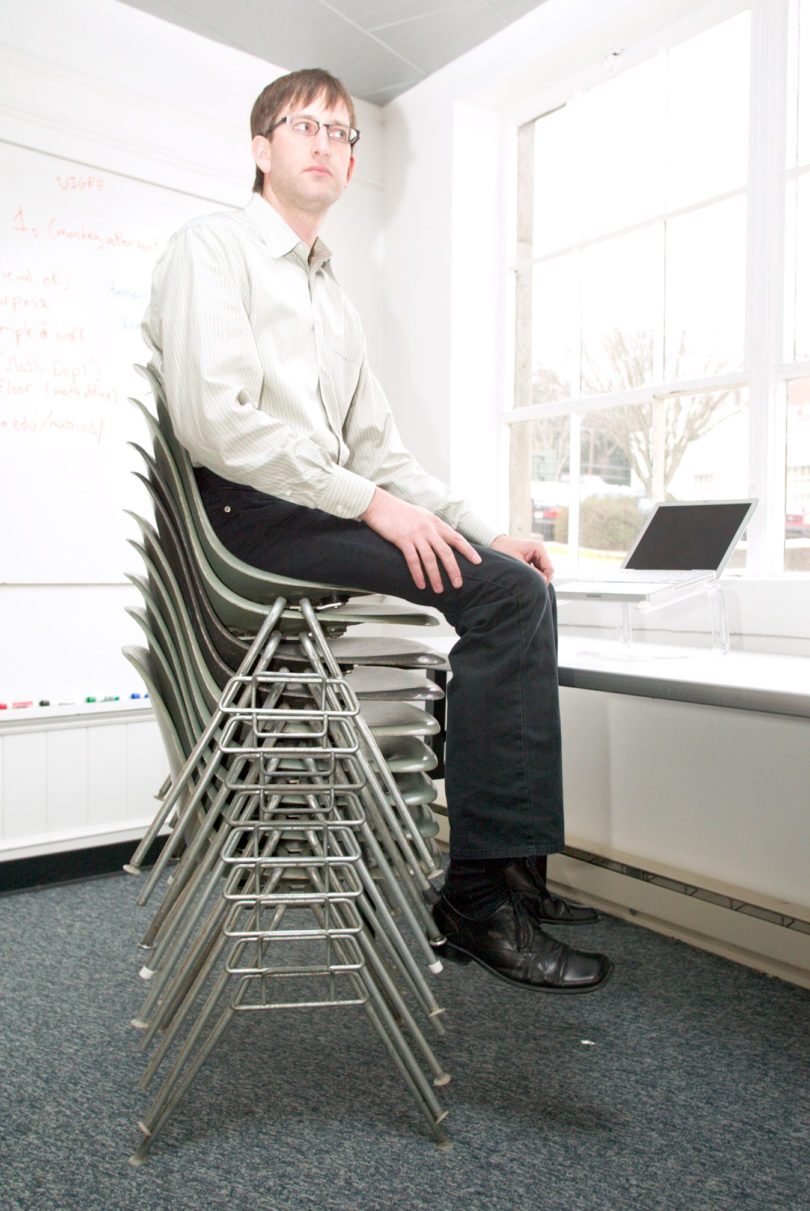 Ideas for Creative Exploration-ICE-is an interdisciplinary program for advanced research in the arts. The first ICE project was the Web site (at www.ice.uga.edu), which launched in fall 2001. Columns talked to assistant director Mark Callahan about ICE’s first two years.

Columns: ICE has been covered in Columns before, but it seemed time to catch up.

Callahan: Yes-I remember reading the first story before I came to UGA, when they first considered the idea of a program like this. I thought it sounded great. At that point I was finishing up my master’s, at Cranbrook, in Detroit, and my own practice as a studio artist had ceased to resemble any category or discipline. Hearing about this idea, I felt Athens was going to be a great place to be.

Columns: How is it going? How do you spend your ICE time?

Callahan: We’ve given out what are essentially seed grants to do projects, and mostly what I do, day to day, is help people manage those projects. And I’m constantly working on expanding our Web resources. But we’re also exploring what the future will be-how ICE will become more formalized. That time is here.

Columns: But you already have several projects in the works.

Callahan: We felt we needed to create some kind of track record, some kind of concrete example of what we would do. And we wanted to take a survey of what resources already exist. So the project grants served several functions. One is getting people’s attention. Of course the big benefit is that we’re creating works that have a life of their own. Right now we have 10 or 12 projects in various phases of development, and I’m excited about those projects going to venues beyond Athens. That will raise our national profile.

In a couple of weeks I’m going to be going to New York to a meeting of the National Art and Technology Network, which is a consortium of institutions-venues, museums, academic programs. I’ll be making a presentation about ICE alongside institutions such as MIT and Carnegie Mellon.

Columns: There was a lot of emphasis at the beginning of ICE on drawing in different kinds of artists.

Callahan: The steering committee for ICE has always been very well balanced among the arts. The digital media area in the School of Art, the Interactive Performance Laboratory in drama, the Center for New Music in the School of Music, the Creative Writing Program in English, the Core Concert Dance Company-it makes sense for ICE to be a place where they’re going to exchange ideas and find support.

Columns: How about students?

Callahan: There’s a project called E.L.I., done by a current graduate student in drama and a recent B.F.A. graduate from the School of Art. ICE helped them go to a summer institute in New York. From that experience they came up with this project, and when they came back, they submitted a proposal for it to be an ICE project, and it was accepted. Now they have built it and shown it.

One current undergraduate joined up with us in the process of a project we did with the New Media Institute last year, building a prototype for mobile wireless net art-works of art designed for handheld computers. He built a project in that extracurricular environment, and with that he applied for and got a CURO summer fellowship. Another project idea grew out of that, and this year he got an ICE grant. He has showed the project at Athens Institute of Contemporary Art, and now has this installation that can travel.

That’s where I see this program working. It’s mentorship, making sure that they know that those opportunities exist.

CURO is a really nice match for ICE. We’ve had some great involvement from students in the Honors Program. Last fall we did a seminar-from ICE to CURO-on research in the arts.

Columns: And how about the future?

Callahan: It’s hard to say exactly how this structure will evolve. ICE could become more like a studio or a laboratory. We’ve looked a lot at the model of the sciences.

Like the Faculty of Engineering and the New Media Institute, ICE is involved in new technology, both in an academic environment and outside it. But with the arts there’s always that factor of the audience. If it’s not out there in the world then it’s not really entering the larger discourse, and unlike the sciences-where professional lines are clearly marked through journals and organizations-art is everywhere.

Columns: Do you see funding coming to ICE directly? Or does the funding come through projects that people find their own funding for?

Callahan: That’s a good question. In the nebulous form we’re in now we’ve seen the advantages and disadvantages of those modes. I’m interested in the model of Studio for Creative Inquiry at Carnegie Mellon, which, like ICE is now, is an autonomous unit. An independent artist can dream up a project and go out and find funding. We see that happening through the resources we provide-expertise, the network, the facilities and resources in the university-which can help an individual create what we would call an ICE project.

Columns: And ICE support makes it more likely that a project could get outside funding.

Callahan: Yes, absolutely. As our reputation grows an ICE proposal will have some resonance. But we also need institutional support, for the day-to-day stuff. And of course those kinds of funds are harder to get. They tend to be shared among institutions, and that’s why it’s important for us to join with other programs, like this meeting of the National Art and Technology ­Network. It’s a bit like a startup business.

Columns: But startups are going to be making the same thing over and over, and you’re precisely not doing that.

Callahan: Right, the mandate is to evolve and never be the same.