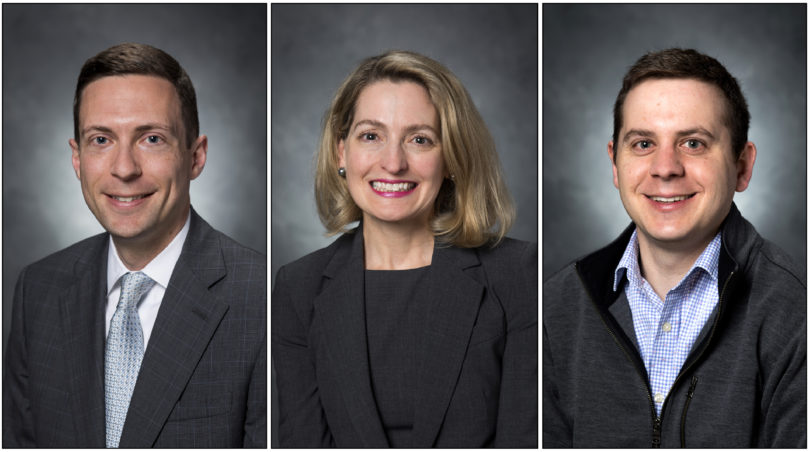 From left: Alex Reed, Christine Albright and Michael Cacciatore have been named recipients of the Richard B. Russell Award for Excellence in Undergraduate Teaching.

Three University of Georgia faculty members have been named recipients of the Richard B. Russell Awards for Excellence in Undergraduate Teaching, the university’s highest early career teaching honor.

“Extraordinary faculty members such as this year’s Russell Award recipients are the foundation of the learning environment at the University of Georgia,” said Senior Vice President for Academic Affairs and Provost Pamela Whitten, whose office administers the awards. “By creating memorable and engaging classroom experiences, they make students active participants in the learning process.”

Albright, who joined UGA’s faculty in 2012, is a national leader in using a teaching pedagogy known as “Reacting to the Past,” which allows students to role play as they learn about historic events such as the assassination of Julius Caesar.

She also created an annual Latin and Greek Banquet that enhances students’ understanding of culture during the classical time period, and she spearheaded the annual Homerathon, a two-day performance of the poetry of Homer that has exposed students in other fields to the classics.

Albright is a Teaching Academy Fellow and an Online Learning Fellow. She serves as coordinator of elementary languages and graduate coordinator for the classics department.

Cacciatore, who joined the UGA faculty in 2013, places an emphasis on student engagement and active learning, whether in a small seminar course or in his large introductory public relations course that enrolls more than 250 students. He incorporates current events and campaigns into classroom discussions, and he re-envisioned his introductory course to build writing skills and integrate a greater level of discussion to better position students for entering a competitive job market.

Cacciatore has been recognized three times as his department’s teacher of the year and twice by the UGA Career Center. He served as a Teaching Academy Fellow as well as a Plank Center Educator Fellow.

Reed, who joined the insurance, legal studies and real estate department in 2010, continuously updates his course material to include real-world examples of legal business concepts. He developed role-play simulations for his course on negotiations and incorporated innovative components from highly acclaimed programs into the class. Reed was instrumental in the development of the legal studies certificate program six years ago, and he took over as director of the program in 2015.

Reed has received Teaching Excellence Awards from his department and college. He currently serves on the Terry College’s Diversity and Inclusion Advisory Board and is also president of the Southeastern Academy of Legal Studies in Business.

Established during the 1991-1992 academic year by the Russell Foundation to honor the late U.S. Sen. Richard B. Russell, the Russell Awards include a $7,500 cash award, and recipients are honored at the Faculty Recognition Banquet during UGA Honors Week. Nominations for the Russell Award for Excellence in Undergraduate Teaching are submitted by deans and considered by a committee of senior faculty members and undergraduate students.

To be eligible for the award, a faculty member must have worked at UGA for at least three years and no more than 10 years in a tenure-track position.

To learn more about the Russell Awards, see https://t.uga.edu/2Zp.